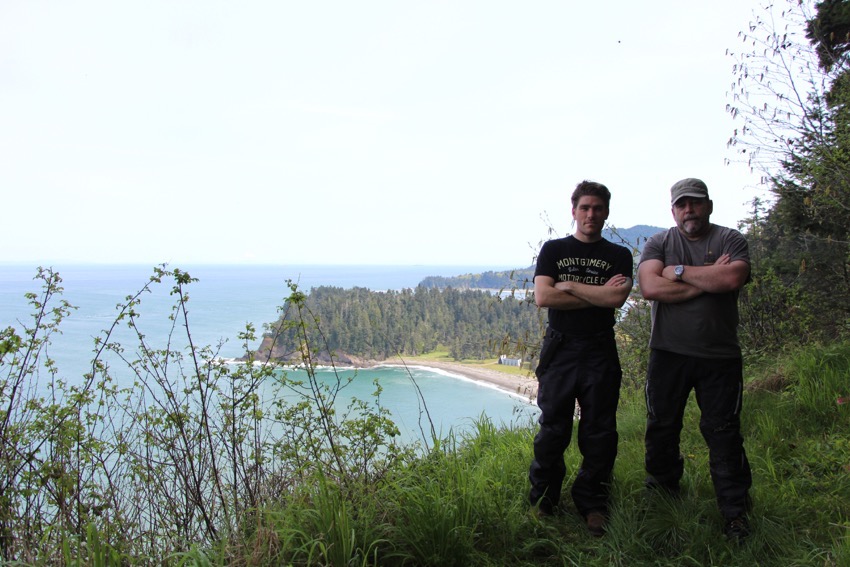 Sometimes you have to rewind a bit in order to really grasp hold of what you’ve done – to observe, objectively, a juncture in your life. So I suppose I should begin this story from the end, when I was standing maybe five-feet from a 300 foot vertical drop. Less if you consider that what I was standing on was nothing more than a precarious dirt floor perched over an edge. Justin stood close behind, in as much awe as me, I suspect. He took pictures, capturing the silent juncture we were sharing in the presence of something beautiful. 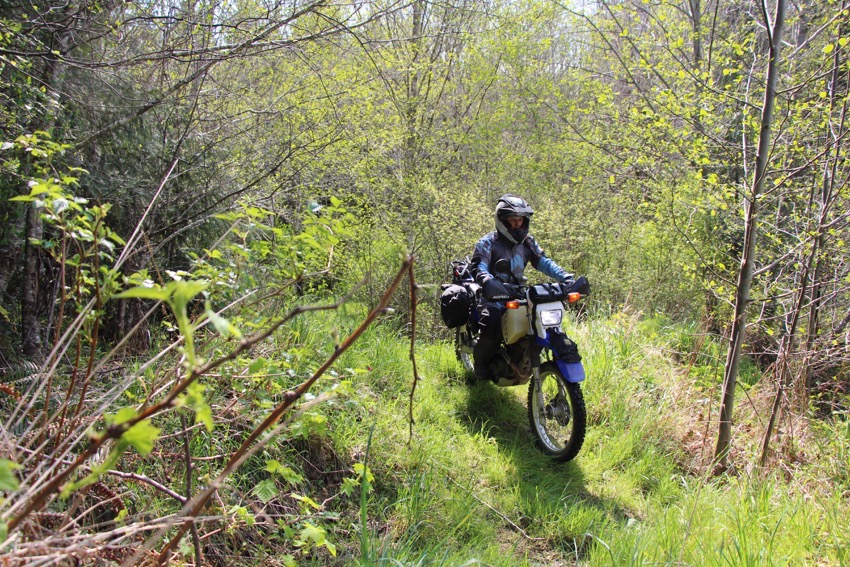 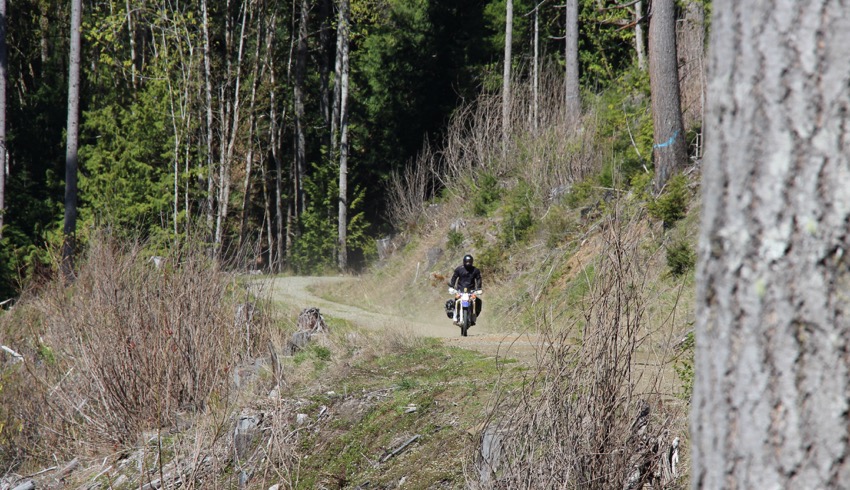 One wrong step and I’d tumble (more like free fall) down to the Strait of Juan de Fuca – the only waterway that connects the Pacific Ocean to the Puget Sound. The view was crystal-colored: swells of blue and turquoise water, sparkling in the sun. Sizable cliffs, though dwarfed by my current location, protect what is most precious further inland of the waves. Justin and I lamented. This was the last of the bunkers, the last “treasure” in our hunt, and we were sad to be finished. As every obstacle we encountered from “here on out,” we had encountered before. 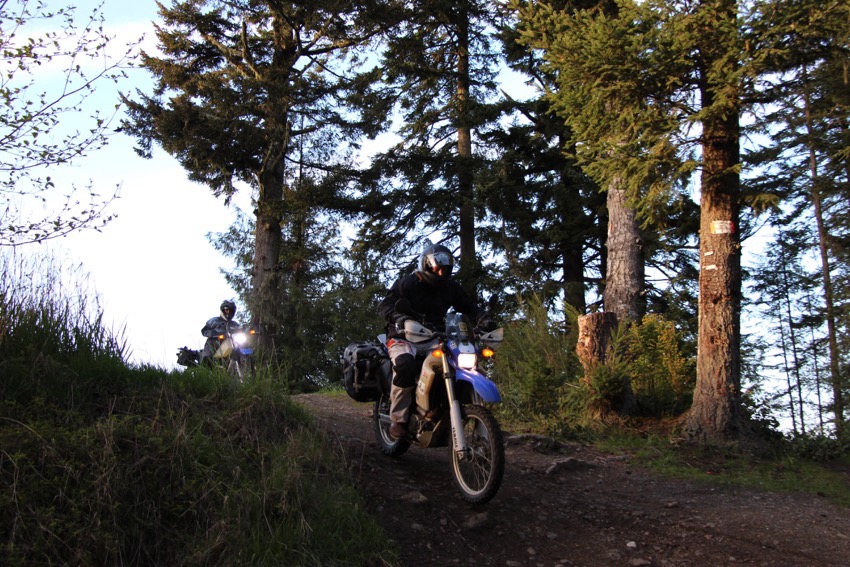 The bunker, or battery, was a modest “two-bedroom apartment” that had enough space for just two machine guns, a couple cots, some household needs and a fire. Or so we speculated. Active since 1940, and constructed for WWII, this bunker was the brightest, the most inviting, the hardest to get to and, for that reason, the least disturbed of the bunch. 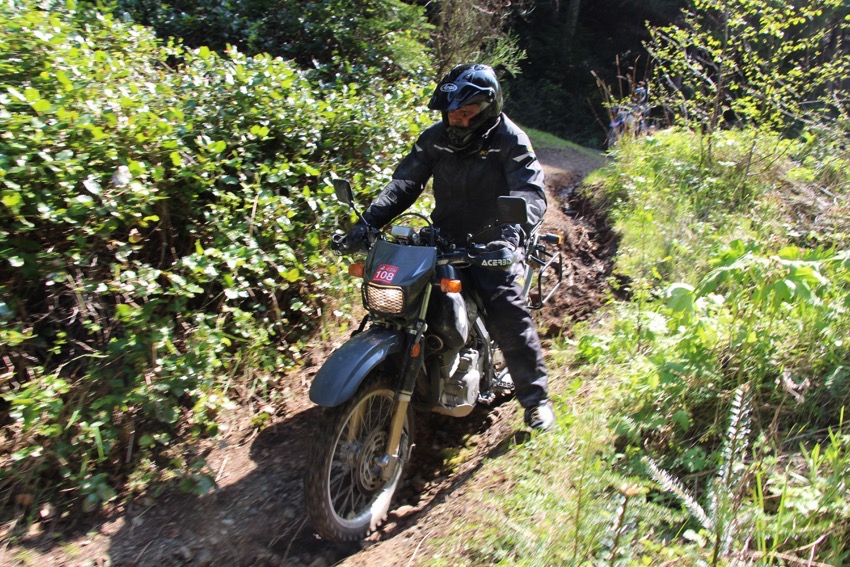 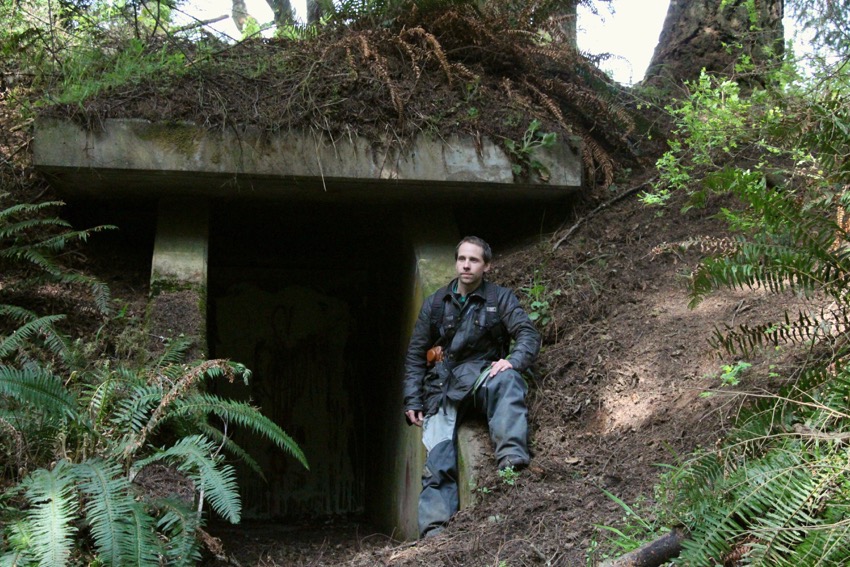 The group joked about moving in for the summer. Bringing the most basic personal items, it needed to be comfortable and we could make the place ours. When reality kicked (back) in, the glare from outside the rectangular cement window drew us in like moths. Everyone seemed at ease. The memory of the hardships we endured to get there began to fade. This one wasn’t the most impressive in size, nor story. It was a place that had to be earned. And as “Adventure Motorcyclists,” this fact was the only encouragement we needed. 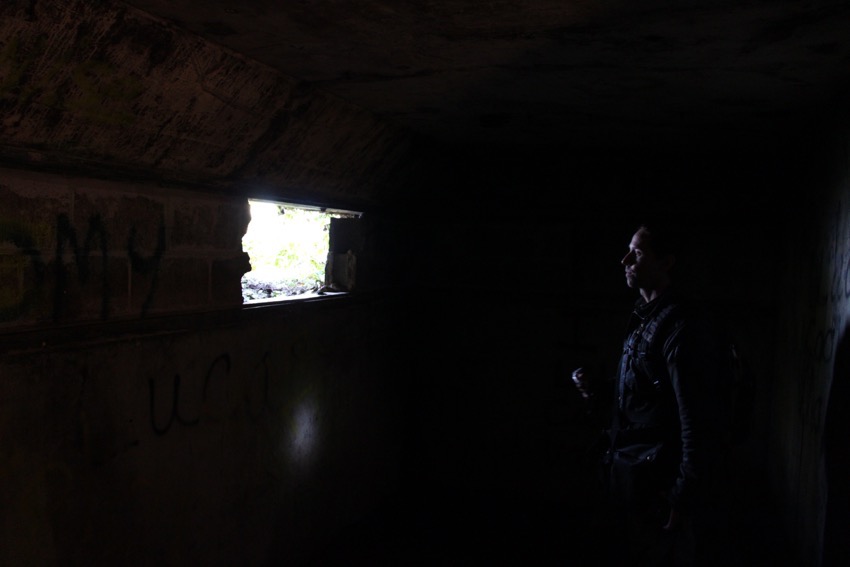 Andy was our guide – a good friend of Justin’s and fast-growing friend of mine. He’s lived on the Olympic Peninsula his entire life, and to say he’s scoured it from top to bottom is an understatement! He planned to lead us on a four-day, off-road excursion in search of what I deemed to be America’s present “ruins.” 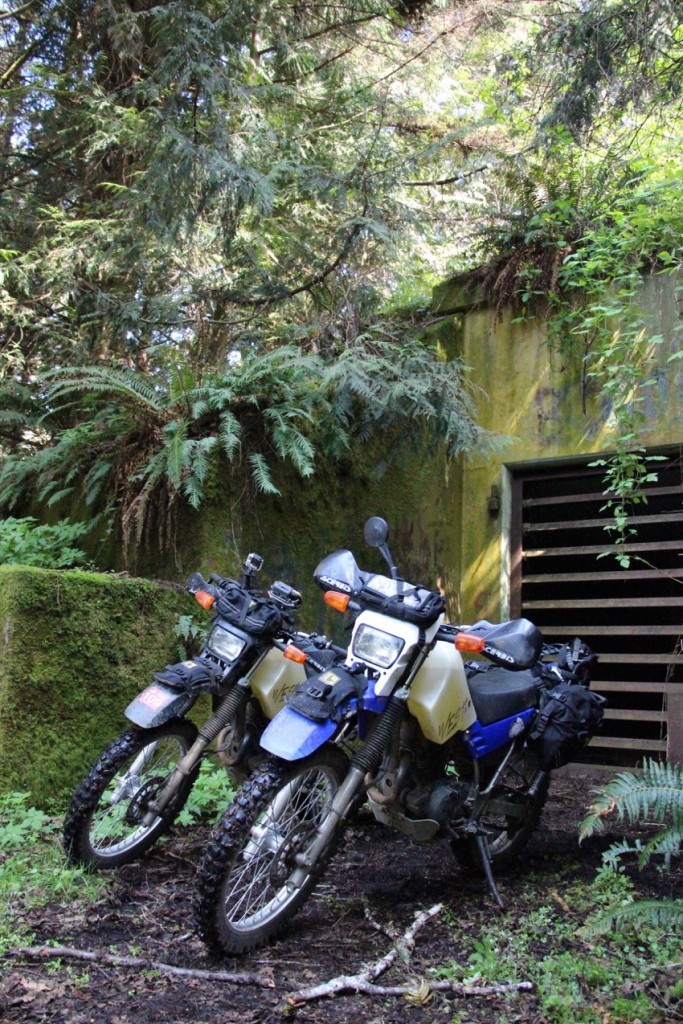 Each day we’d take wide gravel roads, varying in how much maintenance they’d seen over the years, which sometimes split into narrow complex paths like the slender fingers of a river. Our trials ranged from ruts to whoops, water-crossings to dried-up creek beds, and more. My biggest challenge, however, was keeping up. Each rider had their own skill level, all of which seemed to dwarf mine. However none of them felt inclined to leave me in the dust (gratefully). This harmony amongst the group made the difficult parts of the search seem almost laughable. Almost. 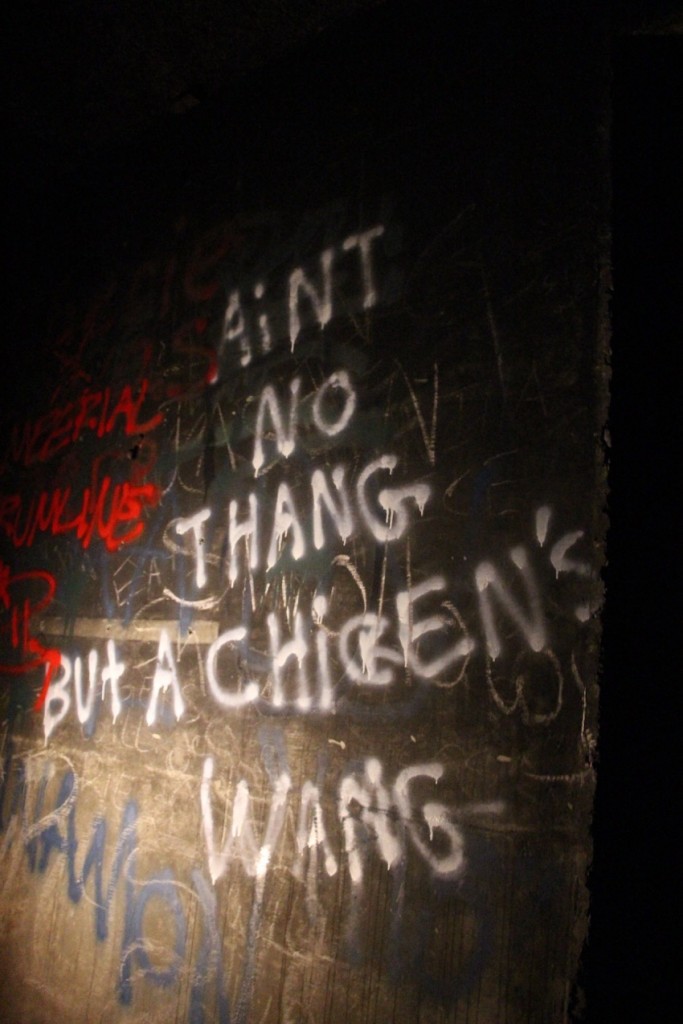 A few of us had unknowingly overlooked the first battery on our list the afternoon prior. Without Andy, we couldn’t remember where the proper door was. We parked atop a level, albeit still quite large, mound of earth. When we finally made it inside, what we found was an unassumingly large, chilly, pitch black series of rooms. If our lights had failed us, we would be left to wander aimlessly in the dark – pissing ourselves, 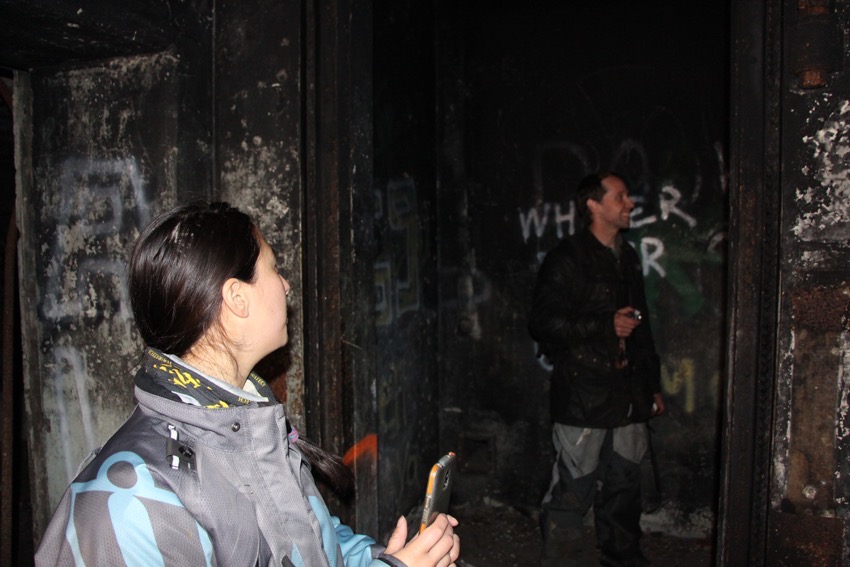 I’m sure – feeling our way around very carefully through the concrete halls, praying not to fall into a ditch. Anticipating the trip, I had wondered if I’d be anxious inside of the bunkers. Knowing that I had no real idea what exactly went on in there over the years. What creepy tales still loitered; trapped forever between the walls. Just who, or what, has lingered through these ruins? 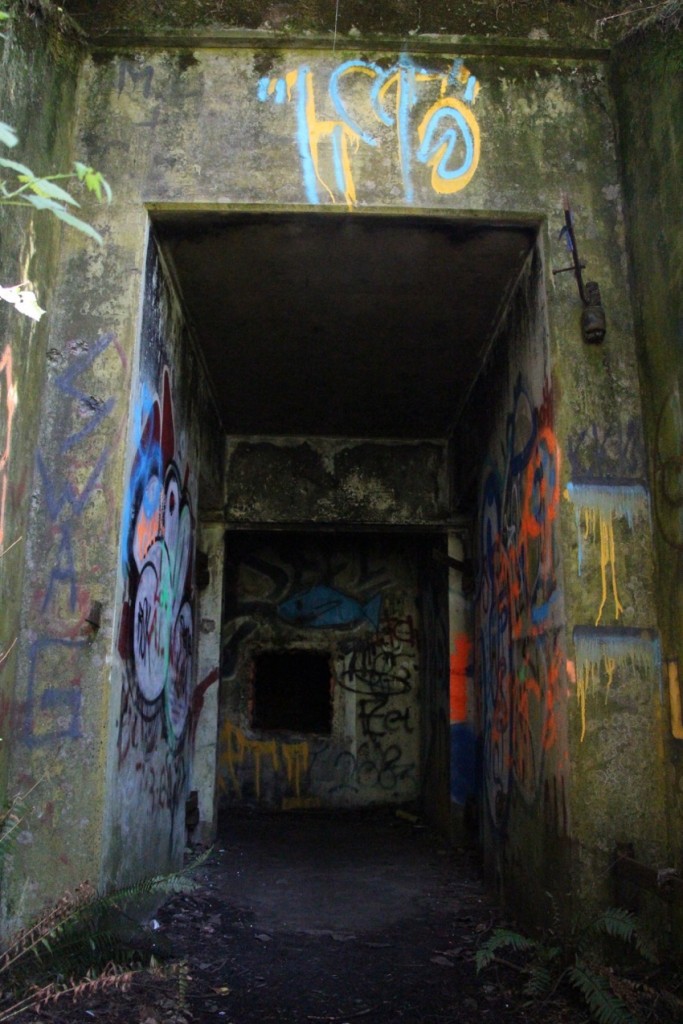 Many, many forgotten fortresses line Washington’s coasts. Millions of taxpayers’ dollars went into the massive six to sixteen-inch guns, which, later reduced to 500 tons of scrap metal, had only been test-fired… once! The technology used to spin the turrets at the flick of a wrist, could likewise turn ’round a train car. It’s all very intriguing when you put it together – absorbing what knowledge of the once great relics that you can glean from Google, and then standing in their presence. The second noteworthy site on our list was just that, “great.” So big, so deep inside – we speculated – that it was the only one of the bunch to be barred at all entries. 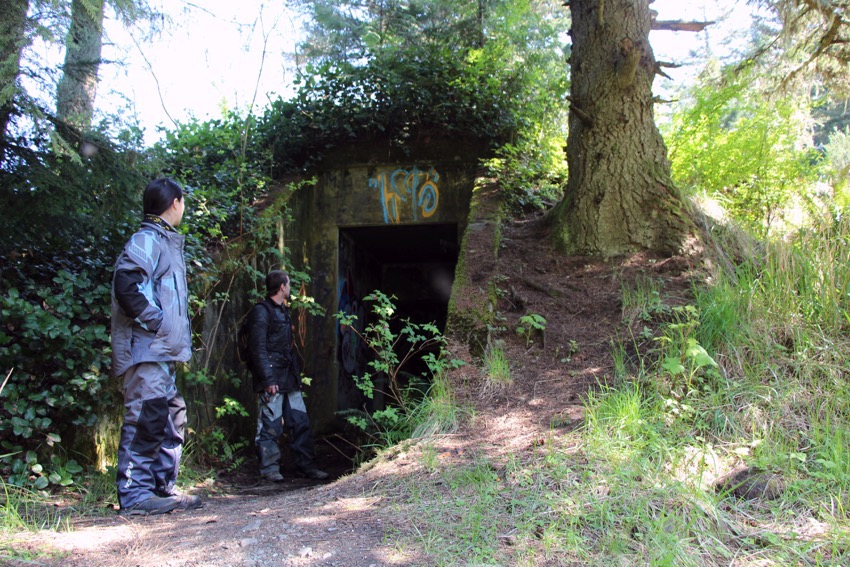 In front of the steel gates we stretched our eyes as wide and far as they could reach to try and get a good look. Cut outs in the walls told us that there may have been a track installed, used to shuffle munitions (and ?) around the corridors. A strong breeze through the gate revealed the possibility of multiple levels dug, who-knows-how-far, below the first. Vegetation clung to the exterior, draping loosely off of the roof, which was hiding in plain sight. The pine trees around the bunker were so tall, so thick; I could hardly believe there was a clearing that faced the Strait less than a century ago. 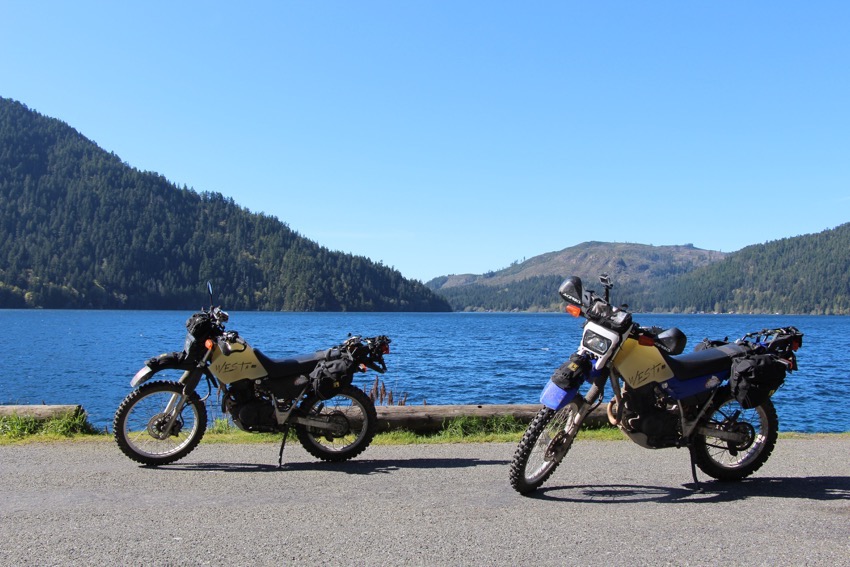 We hiked around on foot, stumbling over the giant cylindrical outline of what once held the military’s finest in artillery – that same turret that twirled a piece of a train like a ballroom-dancer – the one whose gun could fire 28 miles out toward any poor soul who dared it. I left that day a little proud of what we’d “found,” knowing quite well that this was a regular stop on Andy’s ‘Olympic Peninsula Moto-Tour.’ 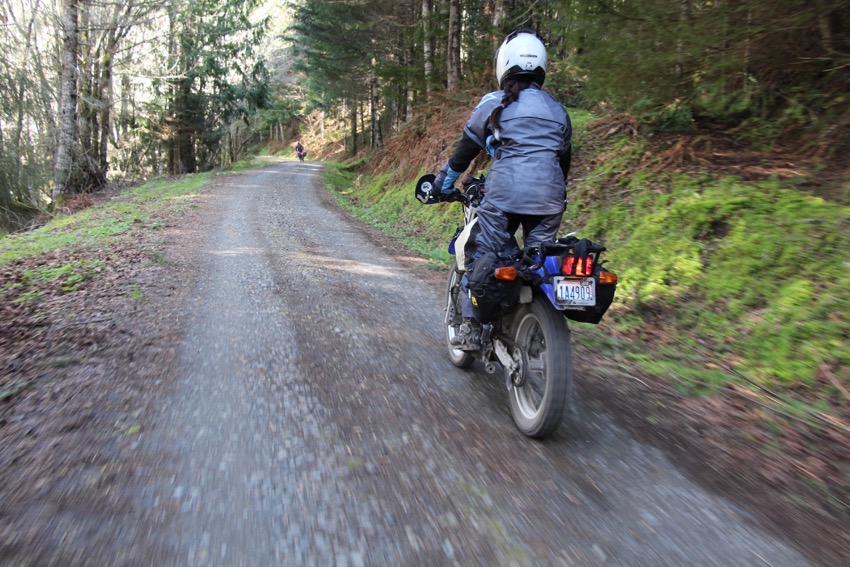 After dusk, conversation grew as we gathered ‘round the campfire. Excitement from the day had barely begun to dwindle, though our bodies weighed heavily from exhaustion. By the next day’s end, however, Justin and I had soaked at the Sol Duc hot springs – a necessary luxury as far as I’m concerned. Treasure-hunting for bunkers wasn’t just some trip to some destination. It was an opportunity to become a part of its history. 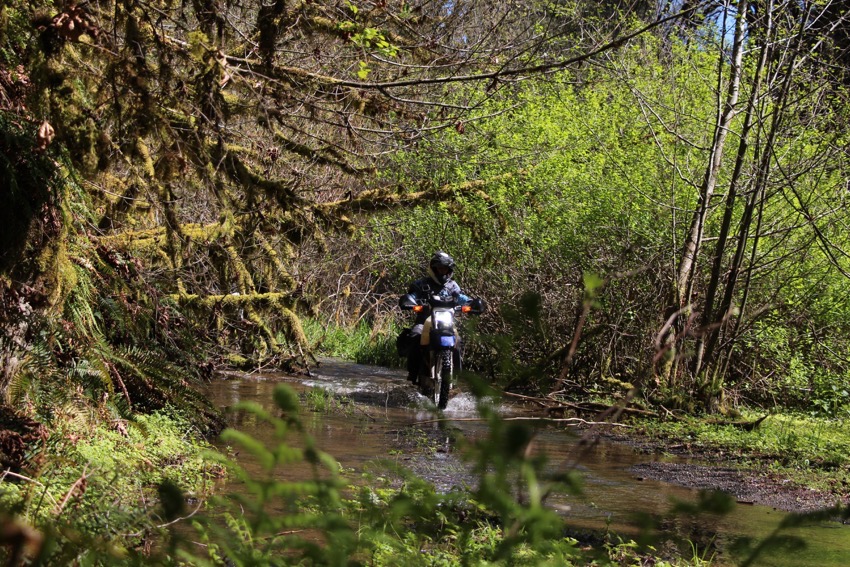 Until those structures truly succumb to the forest, my existence (in some way) was added to the countless number of untold stories that the next explorers might try to piece together. That had to be earned. What we rode our motorcycles through that week tested both our limits and willpower, things that all people should know about themselves. I discovered my limits that week from the many challenges we faced – a discovery worth maybe a little more than the “treasures” we discovered. 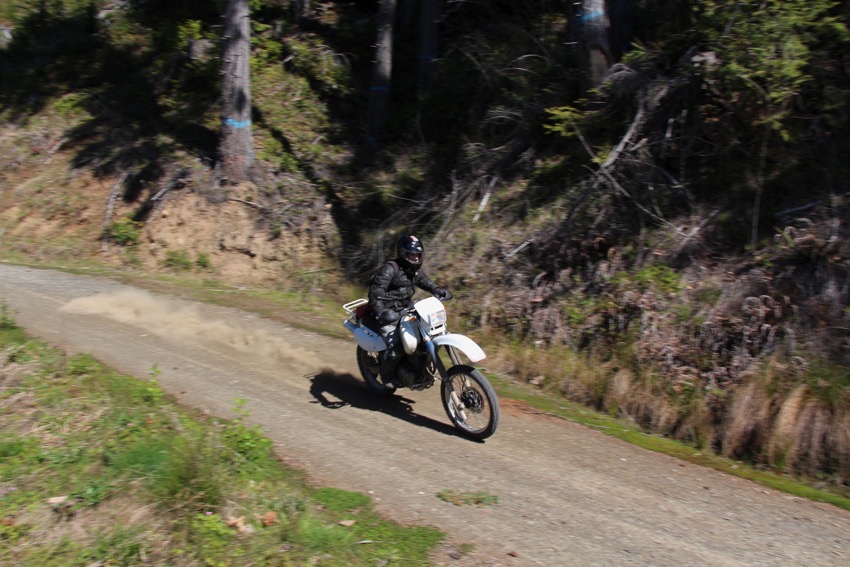 We raced the sun to our last bunker. We stopped at a gate where Andy made a sharp right into the woods and was gone. We followed suit and pursued him along the most technical trail of our expedition. There was not one trace of a tire track or footstep on our path. By the time we reached our prize, my heart pounded and sweat poured while I struggled to remove my sticky riding gear.

At the edge of the cliff, overlooking that crystal blue ocean, I reminisced. This week taught me to take chances, seek out adventure and not waste time waiting for it to find you. Most of all, if you’re lucky enough to live your dreams, don’t take it for granted. Appreciate the good and the bad while you have it, then turn around and take it all in; like standing at the (literal) edge of your country, next to the love of your life, soaking in the breathtaking sight and doing all of it ‘your way.’ 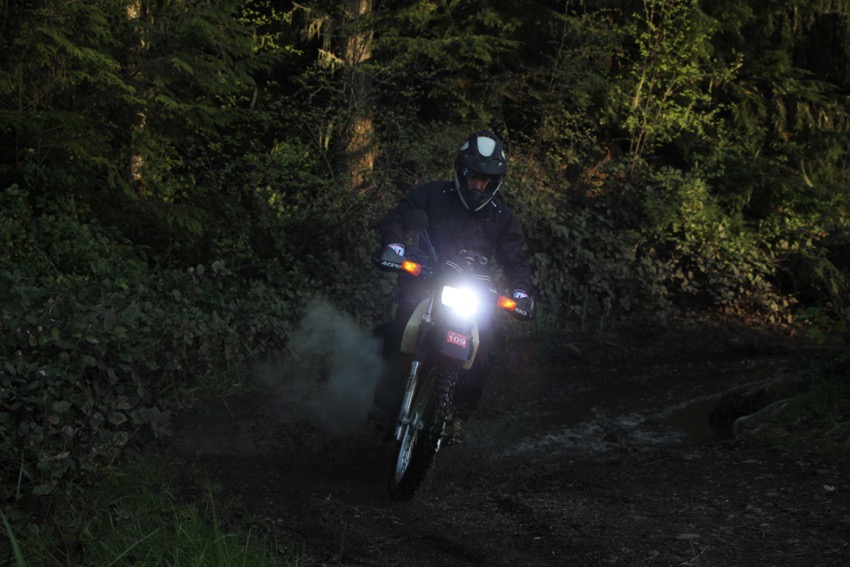