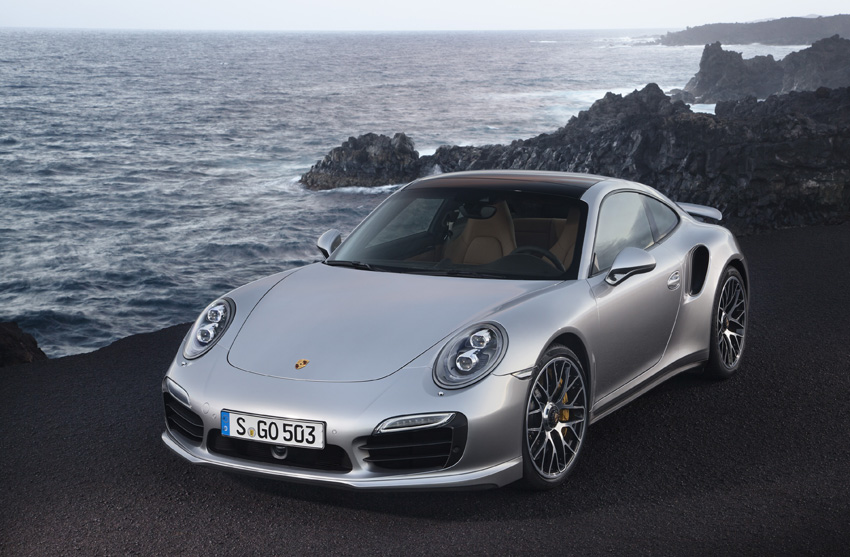 Atlanta. The Porsche model offensive in the anniversary year of the 911 is reaching new heights. Fifty years ago, the 911 made its debut at the Frankfurt International Auto Show – and just ten years later, the first 911 Turbo prototype was at the IAA. On this 40th anniversary of the 911 Turbo, Porsche is now presenting the new generation 911 Turbo and Turbo S â€“ the technological and dynamic performance peak of the 911 series. A new all-wheel-drive system, active rear axle steering, adaptive aerodynamics, full-LED headlights, and up to 560 hp from a flat six-cylinder engine with twin-turbochargers underscore the role of the new generation 911 Turbo as an ultra performance car, every day car, and technology flagship. Playing an equally crucial role are an entirely new chassis and lightweight design with a 3.9-inch longer wheelbase and larger 20-inch wheels. The Porsche Dynamic Chassis Control (PDCC) active anti-roll system, which is being offered for the first time in 911 Turbo models, increases dynamic performance even more. This system is standard equipment in the 911 Turbo S, as is Sport Chrono Package Plus with dynamic engine mounts, and Porsche Carbon Ceramic Composite Brakes (PCCB); all of these features are also available as options in the 911 Turbo. The result: The new 911 Turbo S shortens the lap time for the North Loop of the NÃ¼rburgring to well under 7 and a half minutes â€“ with standard production tires. 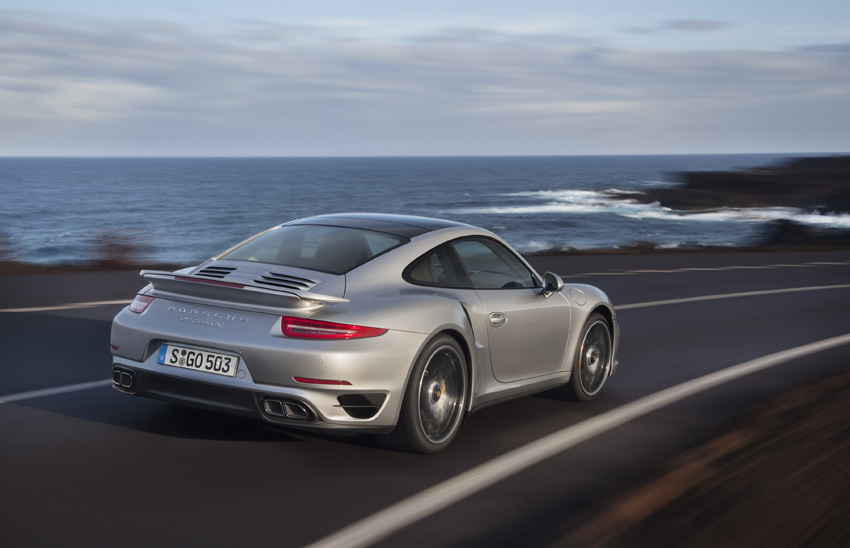 The new engine and refined PDK transmission is partnered with a new Porsche Traction Management (PTM) all-wheel drive system. The turbocharged 3.8-liter six-cylinder engine with direct fuel injection produces 520 hp in the 911 Turbo and 560 hp in the S model. Porsche continues to be the only carmaker to offer two turbochargers with variable turbine geometry on a gasoline engine. Power is transferred to the drivetrain via a seven-speed dual clutch transmission (PDK), which now enables an auto start/stop function with engine shutoff, which activates earlier while the car is comingÂ  to a stop as well as when coasting at speed. A new combined thermal management system for the turbo engine and the PDK transmission are projected to result in real world fuel economy improvements when final U.S. EPA label values are calculated closer to the time the car is on sale in the United States. Induction and engine sounds are transmitted to the passenger compartment via a speaker diaphragm. 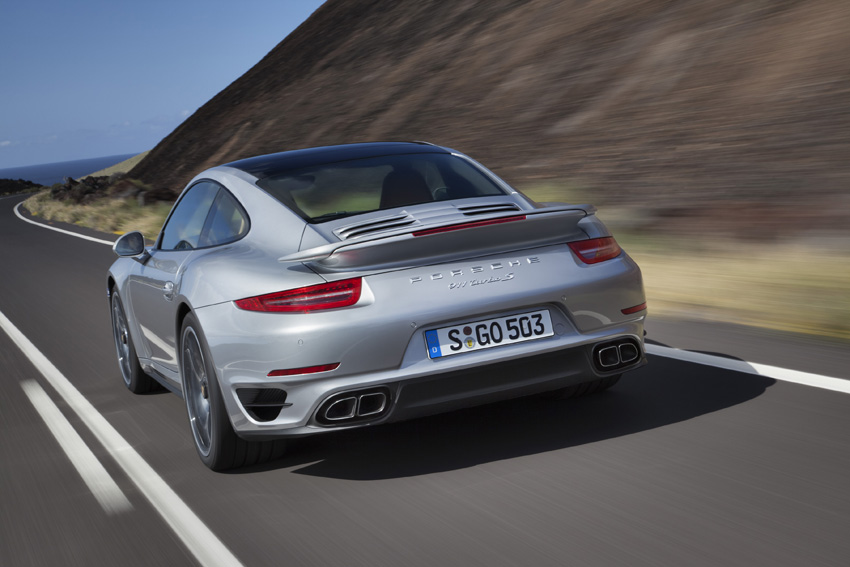 For even faster and more precise power distribution to the front and rear axles, Porsche developed a new PTM all-wheel drive system with electronically controlled and activated multi-plate coupling. The system is equipped with a new water cooling function, which allows for more strength, and therefore more drive torque to the front wheels, than the system in the previous 911 Turbo. Simultaneously, the optimized interplay of the engine, transmission and all-wheel drive systems results in significant improvements to the acceleration capabilities of the 911 Turbo and Turbo S. The 911 Turbo with the optional Sport Chrono Package Plus accelerates from zero to 60 mph in 3.2 seconds, on its way to a top track speed of 196 mph. The 911 Turbo S handles the sprint to 60 mph in just 2.9 seconds, with a top track speed of 198 mph. 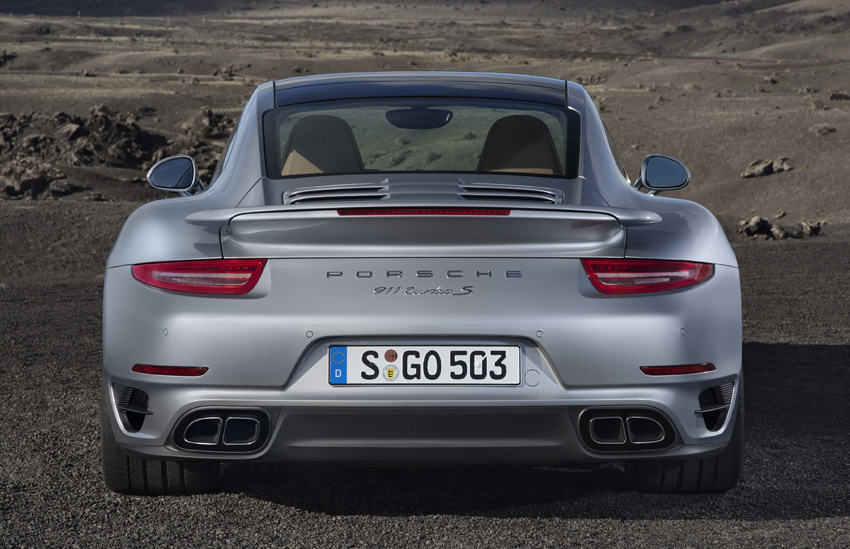 Widest body of all 911 cars

Visually, the two new top variants of the 911 lineup are set apart from other models more than ever. The characteristic expansively wide rear body panels of the new generation 911 Turbo are a further 1.1 inches wider than on the 911 Carrera 4â€“ the fenders feature a nearly level surface, about the width of a hand, between the C-pillar and the outer edge of the car body. Other differentiating characteristics include forged two-tone 20-inch aluminum wheels. On the 911 Turbo S they have center hub wheel locks. The Turbo S is further differentiated by new, standard full-LED headlights that feature four-point daytime running lights and camera-based high/low beam control, which can be ordered as an option for the 911 Turbo. 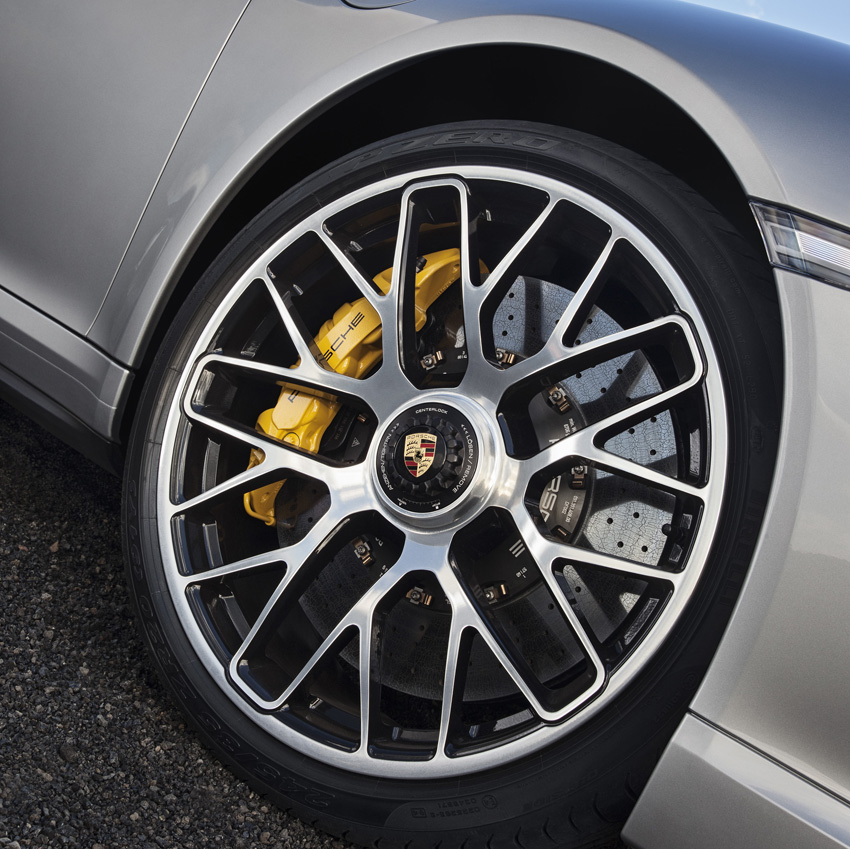 The introduction of rear wheel steering in all turbo models immensely improves both track driving capability and everyday performance of the two new sports cars. The system consists of two electro-mechanical actuators, instead of the conventional control links, on the left and right rear axles. The steering angle of the rear wheels can be varied by up to 2.8 degrees, depending on vehicle speed. At speeds up to 31 mph, when the front wheels are turned, the system steers the rear wheels in the opposite direction. This actually corresponds to a virtual shortening of the wheelbase by 9.8 inches, which gives the 911 Turbo unrivalled performance in curves. The system lets the car turn faster into corners and offers more dynamic steering response. This noticeably simplifies maneuvering and parking.

At speeds above 50 mph, the system steers the rear wheels parallel to the front wheels. This is equivalent to a virtual lengthening of the wheelbase by 19.6 inches and gives the car tremendous directional control capability. At the same time, the steering input by the driver leads to significantly faster build-up of lateral force at the rear axle, which responds to steering commands even more quickly. 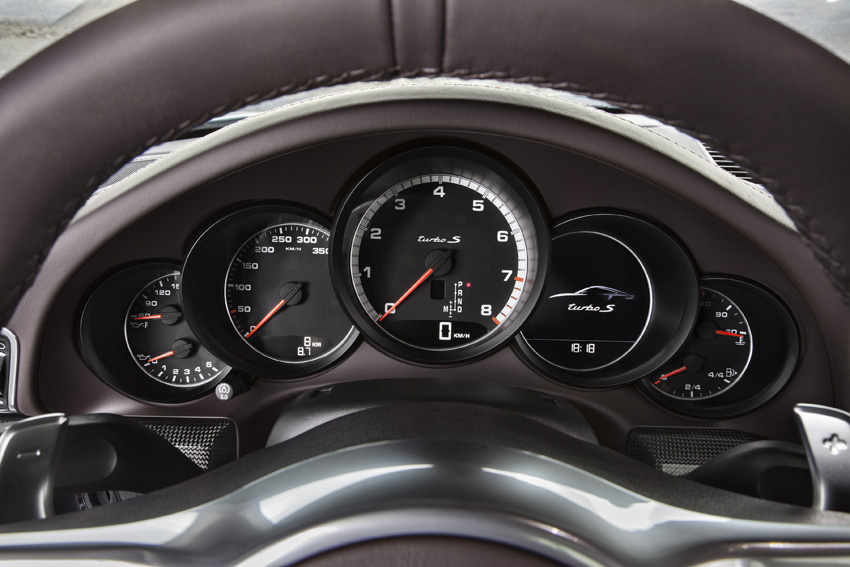 Porsche developed an active aerodynamic system on the new 911 Turbo models for the first time. It consists of a retractable three-stage front spoiler, whose segments can be pneumatically extended, and a deployable rear wing with three adjustable wing positions. This makes it possible to tune the aerodynamics of the 911 Turbo to fulfill driver wishes for either optimal efficiency or top dynamic performance. In the performance position, all segments of the front spoiler are fully extended, and they generate considerable down force at the front axle. Similarly, the rear wing is extended to its maximum height with the greatest angle of attack. This also generates more down force at the rear axle. Dynamic performance is improved to such an extent that lap times at the North Loop of the NÃ¼rburgring are improved by up to two seconds due to this system alone. 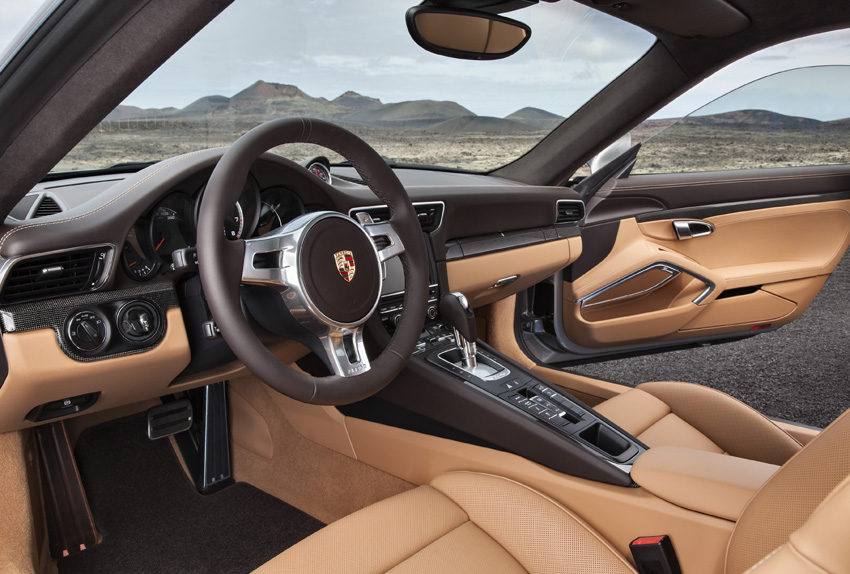 The interior was completely redesigned in both 911 Turbo models, and it builds on the 911 Carrera family. The S model is particularly well equipped, offering such features as an exclusive interior in a black/Carrera red color combination and standard Sport Seats Plus with 18-way adjustment and memory. In addition, the seat back shells are upholstered in leather with double cap seams and various elements in carbon look. As on the previous models, the BoseÂ® sound system is installed as standard; for the first time, a BurmesterÂ® system is also available as an optional feature. A radar-controlled cruise control system, camera-based road sign recognition, and speed limit recognition are other new options being offered. 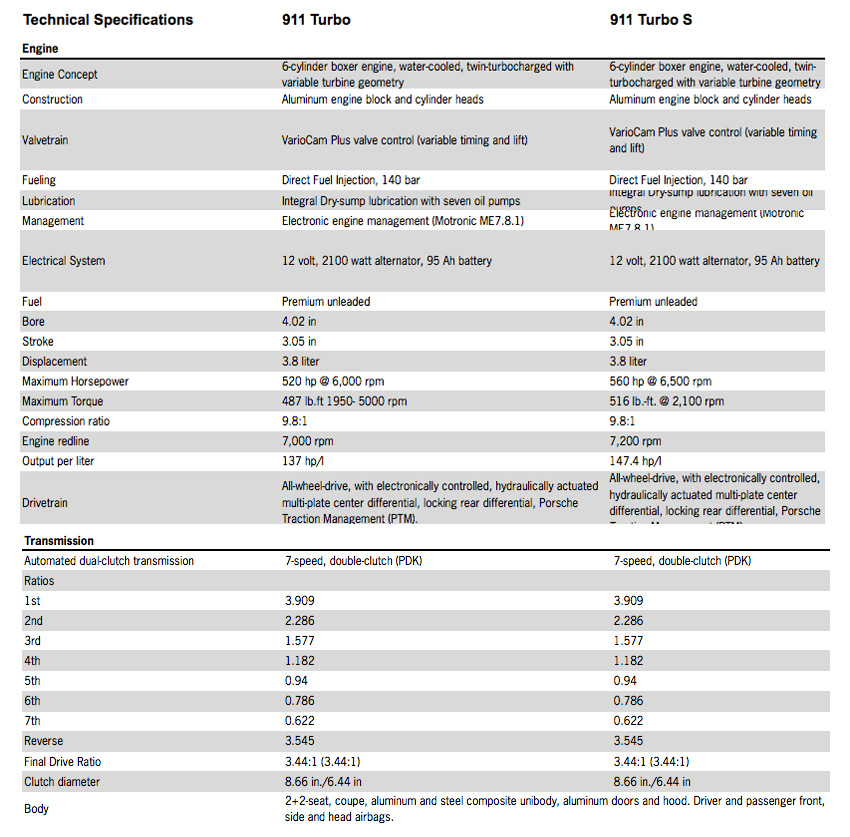 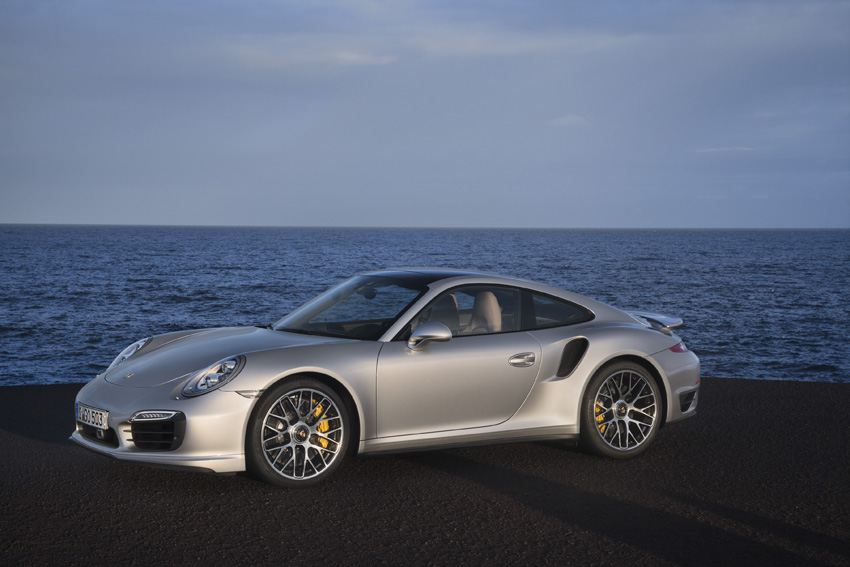 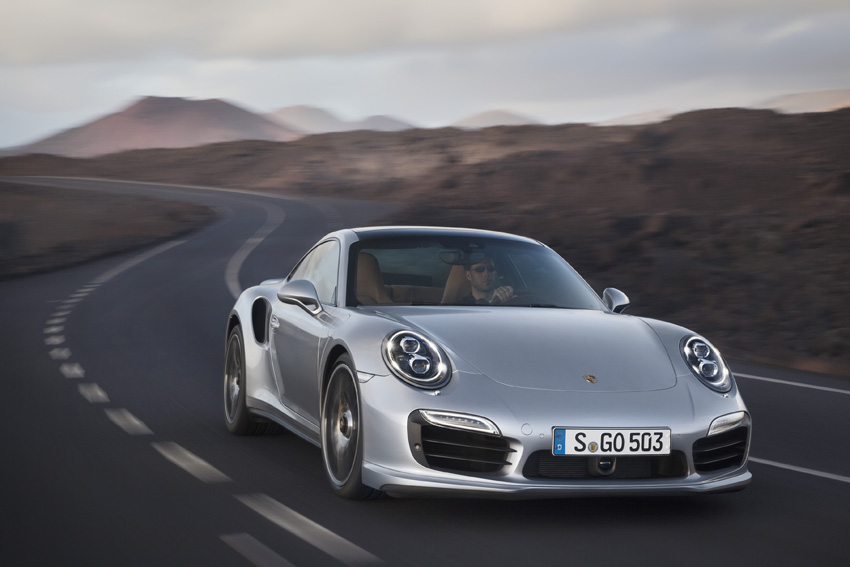 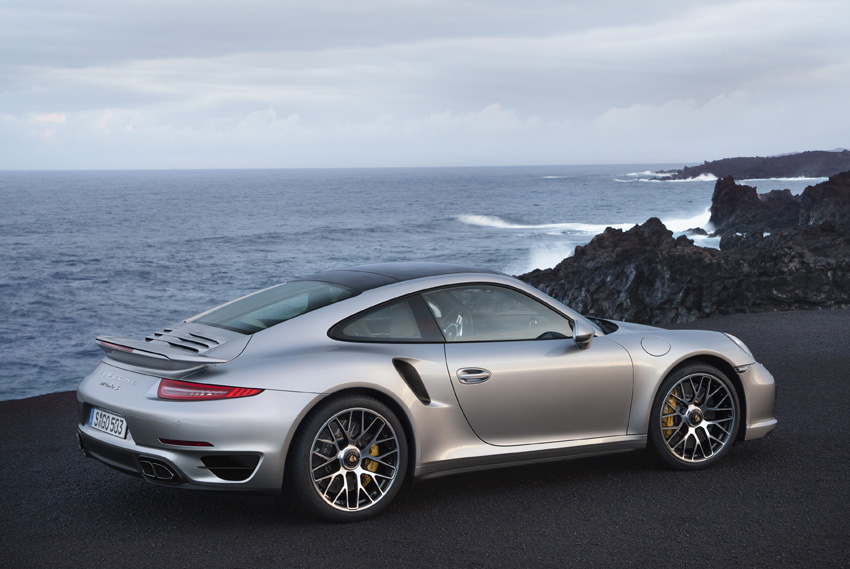 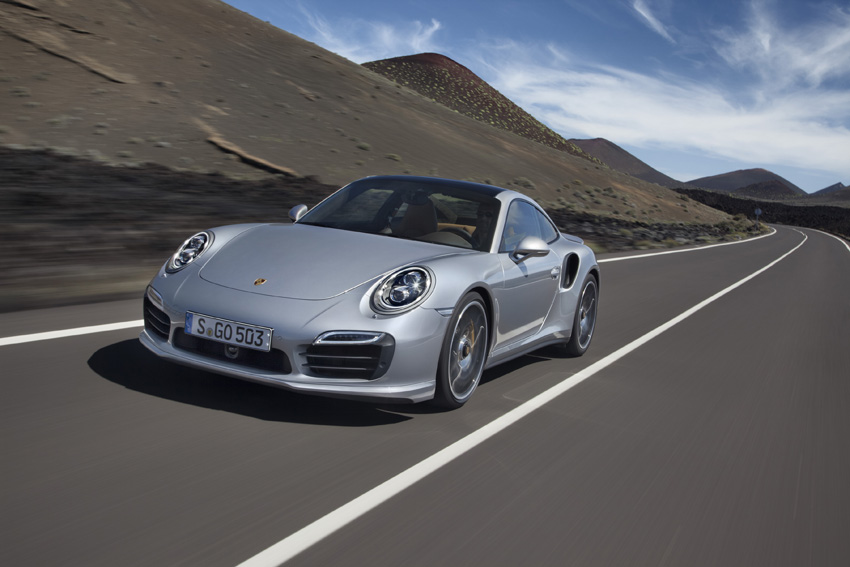