eGarage Stories in Motion™
Words|Photos|Video: Roger S. Meiners
I attended the last day of the 4-day exhibit/judging on Friday, July 21. The next day was the highly-anticipated tour of General Motors’ Milford Proving Ground (MPG). My buddy Fred Uchwat and I piled into his first-edition Corvette Z06 at 7 a.m. and met the other 219 Vettes at Baker’s Restaurant in Milford, Mich., just five miles from my home. The NCRS crew lined us all up according to type of Corvette–C1 through C6 cars in double and triple lines. The arrangement gave us a very graphic history lesson on the Chevrolet icons. 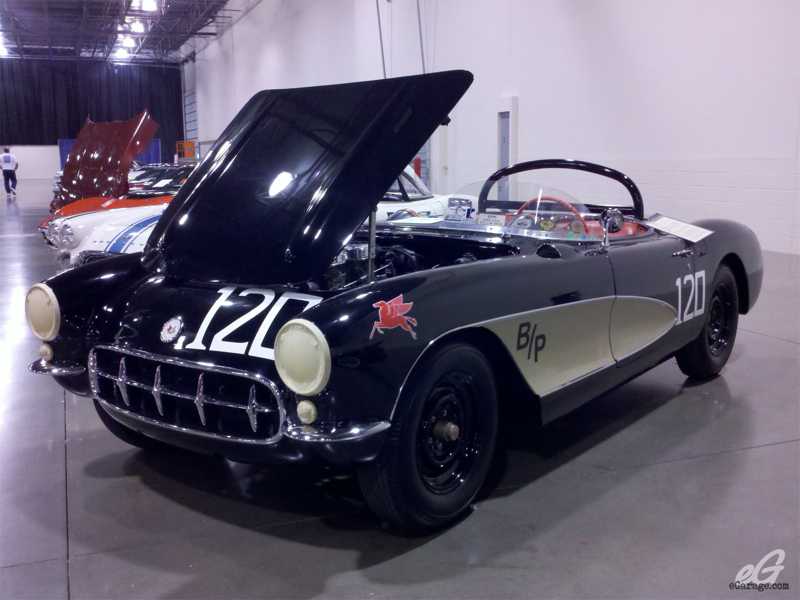 At 8:30 a.m., after breakfast and presentations by Corvette engineers–and admonitions about ridiculously low speed limits at the MPG, and No Photos Allowed–we set out for the “Grounds”–five miles back toward my house. I live only 1000 feet from the 87-year-old campus, which contains over 140 buildings, 140 miles of roads and over 4200 people who test all of GM’s future vehicles. I have visited the Grounds a few times over the years, but was excited to see a new feature, the famous Milford Road Course, said to be designed to simulate several race tracks in the USA including the famous Nurburgring in Germany. 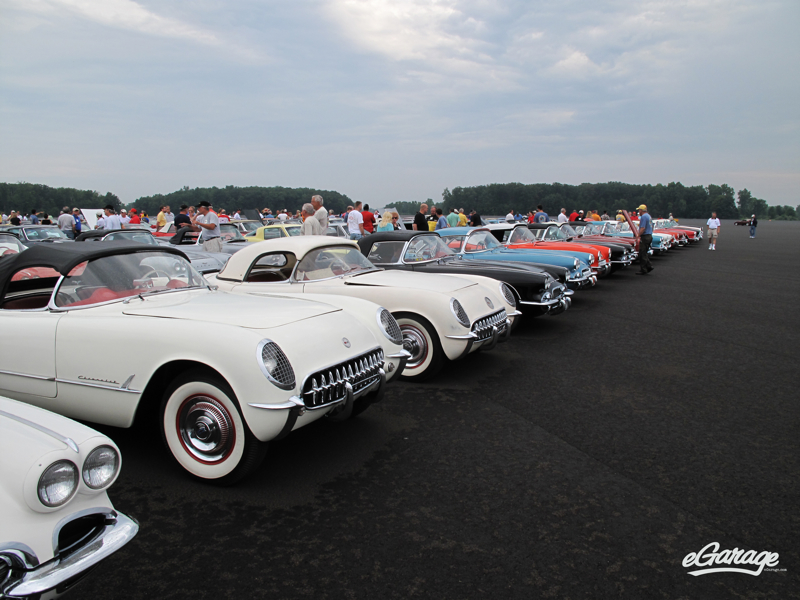 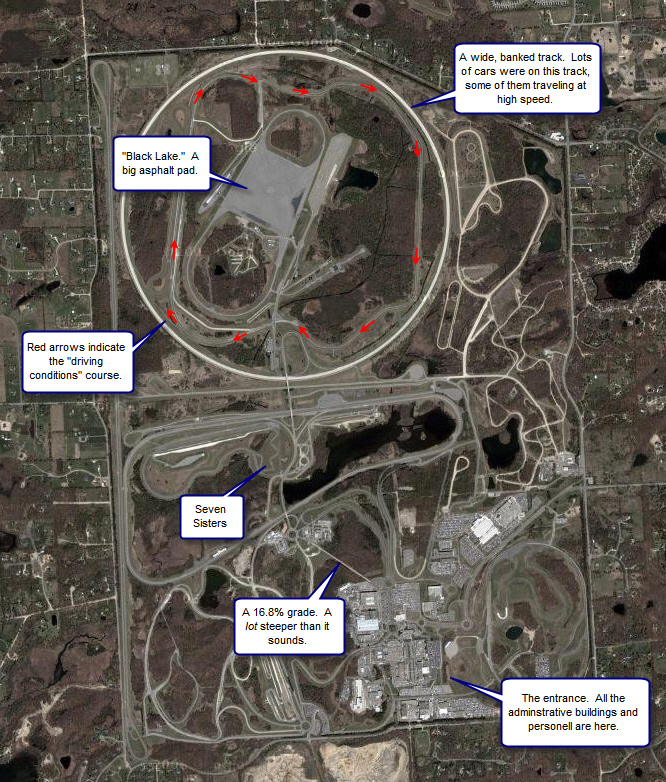 Getting to MPG was half the fun. The Milford cops stopped all traffic along the route as our miles-long train proceeded out into the country and up the long hill to the General Motors facility–it’s situated on the highest point in the county and has 267 feet of elevation change, a terrain my homesite shares. I call it “The Mountains of Milford” and point out to people that sometimes we have snow up here when the town of Milford has none! 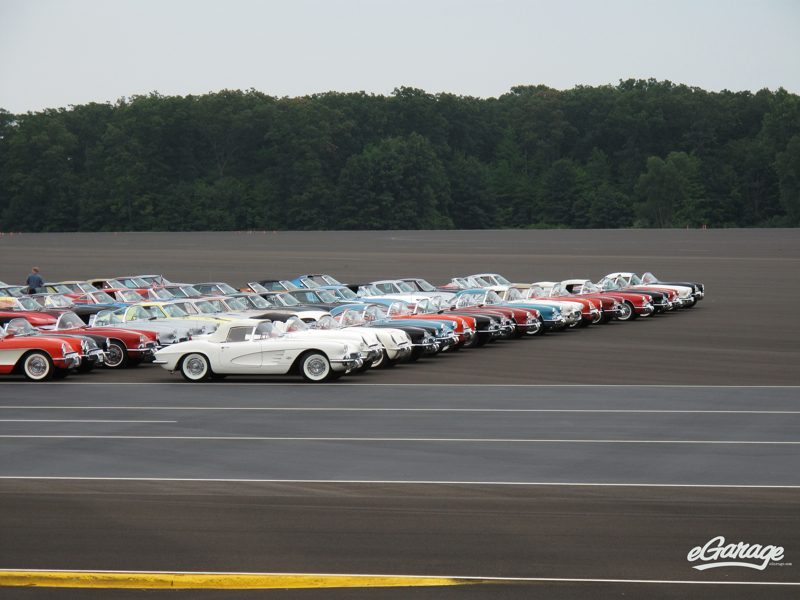 After entering the gate to the Grounds we wound our way past many of the buildings, crested a hill from which we could see 15 miles to the northeast, and arrived at the Vehicle Dynamics Test Area, better known as “Black Lake” because it actually looks like a big lake. Many migratory birds mistake it for one when it’s wet and make some spectacular crash landings there. GM said we could take photos only while we were at this location. 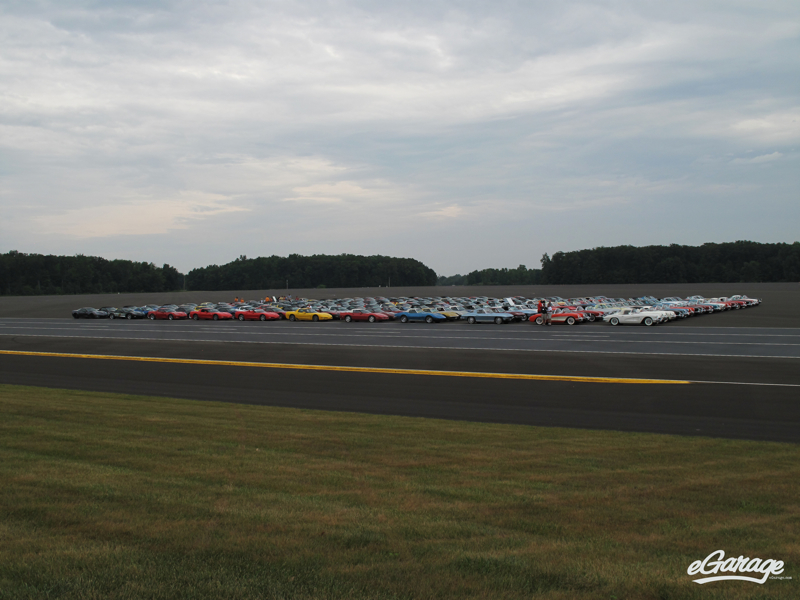 We assembled on the Lake for a group photo. The cars were still lined up by type because that’s how we left Bakers, so the photo should be quite interesting. After an interminable wait by the cars as the photographers went up in a cherry picker for the shot, we went for refreshments at the MPG Event Center and took a look as some 2012 Corvettes–and the Corvette ZL1 that had just set a new production car record at the Nurburgring: 7 minutes and 19 seconds. The driver, Corvette engineer Jim Mero, was there to recount his experience while a video played on a laptop in the rear of the car.
Meanwhile 12 lucky lottery winners and 8 bidders got to ride in another ZR1 around and across Black Lake. We were rather stunned the first time we saw the car come flying out of the woods and across the 68-acre asphalt pad. It looked a lot like Bonneville as the zoomed by at near 170 mph.
Then we all gathered in another long line, looping around the various test tracks. My anticipation built as we neared the Milford Road Course and the vaunted Karussell. And now we were on the course, which was much wider and swooper than I thought it would be. I expected it to be more like a real road course, and then here was the Karussell…I was like WTF. This looks nothing like the real thing, other than it was concrete. It was a huge wide banked wall, much tighter than the actual legend. Major disappointment. But I was quickly over it, in the larger context of being at one of the world’s greatest test facilities–just a few yards from my home where I would continue to enjoy the sounds of high-performance cars careening around the track. 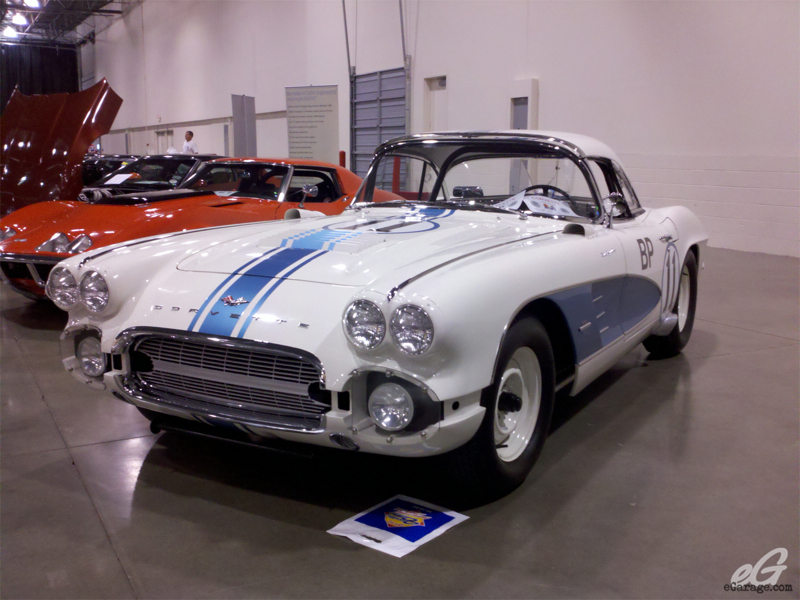