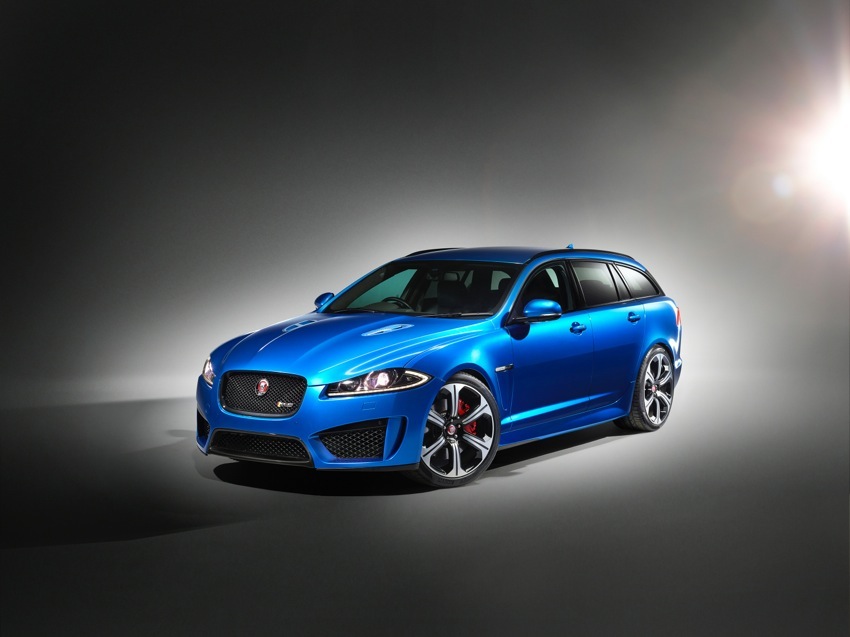 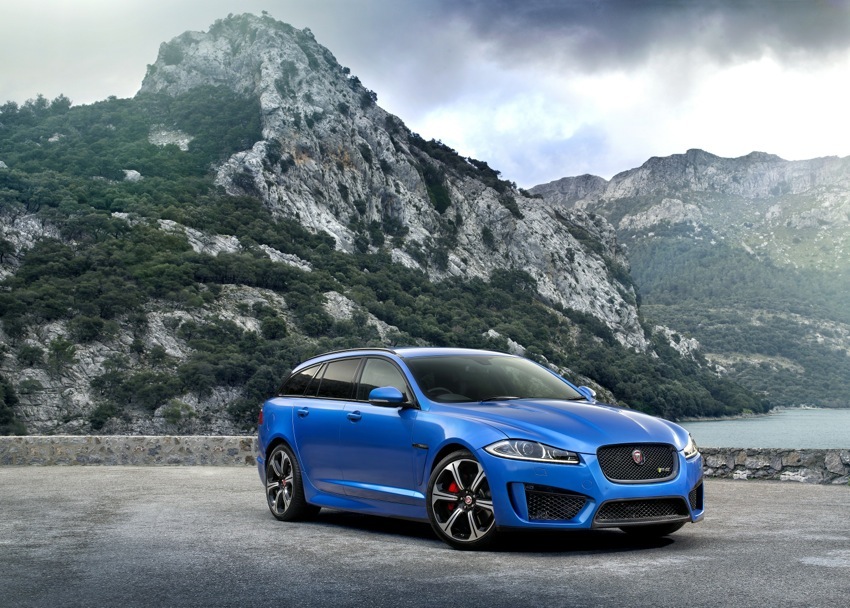 The third model in Jaguar’s ultra-high performance R-S range, the XFR-S Sportbrake joins its XFR-S saloon sibling in the exclusive 300km/h club and is a vivid expression of Jaguar’s longstanding and legendary sports saloon lineage. The XFR-S Sportbrake incorporates engineering features from both the XKR-S and the all-new F-TYPE two-seater sports car to create the most driver-focused, agile and responsive iteration of Jaguar’s award-winning XF model range.

“Combining real-world versatility with electrifying performance, the XFR-S Sportbrake brings Jaguar’s sporting character to life in a truly engaging car that will satisfy the most demanding of drivers while fitting into the most active of lifestyles.” 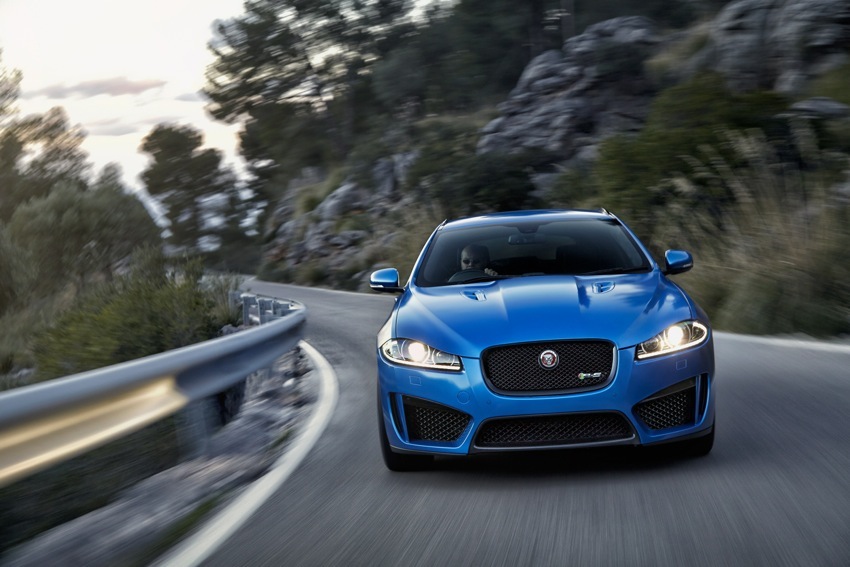 Electrifying performance is provided by the 5.0-litre supercharged V8 petrol engine, which now boasts 550PS and 680Nm – up 40PS and 55Nm respectively over its XFR installation. The increases have been achieved through revisions to the engine management system and optimisation of the flow of air both into and out of the engine. 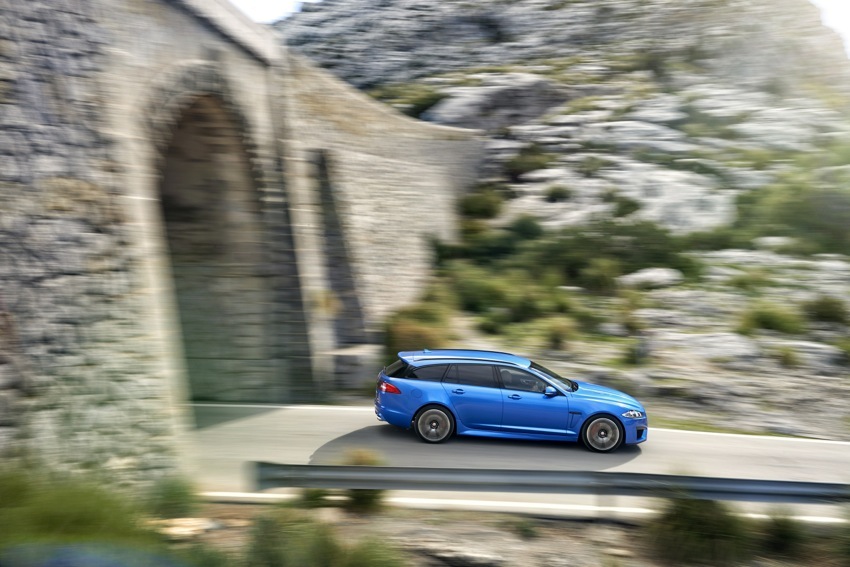 Fitted with an eight-speed transmission incorporating Jaguar’s ‘Quickshift’ technology (developed for the F-TYPE), the increase in engine output allows the XFR-S Sportbrake to accelerate to 60mph in 4.6 seconds (0-100km/h in 4.8 seconds) and on to an electronically limited top speed of 186mph (300km/h). 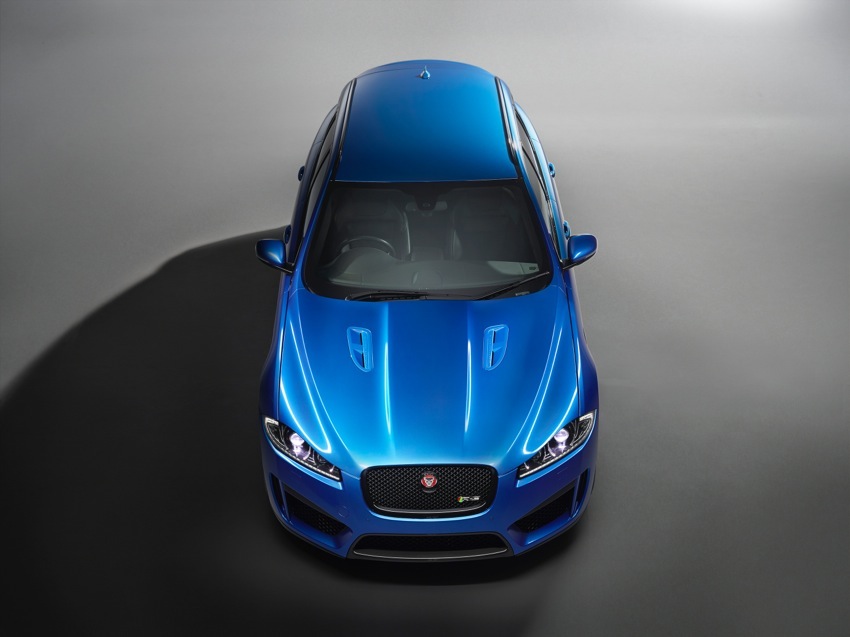 In order to manage the extra rear mass of the XFR-S Sportbrake while retaining the sharp turn-in and response of the XFR-S Saloon, the Sportbrake’s rear suspension has been modified with revisions to both rear spring rates and the adaptive damper tune. These revisions work together to increase the feeling of connectivity with the road surface, allowing for confidence-inspiring handling and a supple, controlled ride. Recalibrated active electronic differential and Dynamic Stability Control settings have been tuned to work with the XFR-S Sportbrake’s modified rear suspension to allow the enthusiastic driver to make the most of the car’s huge potential. 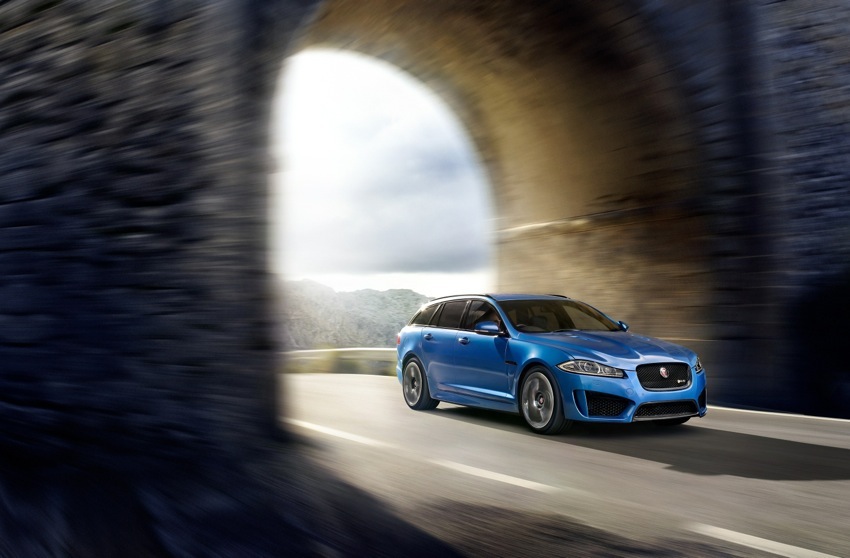 Reflecting the changes under the skin, the appearance of the XFR-S Sportbrake has been subtly modified in order to allow the car to achieve its full potential. As with the standard Jaguar Sportbrake, the combination of a flowing rear window graphic, rising waist and estate roofline lends the XFR-S Sportbrake a dynamic, broad-shouldered stance, while the extended roofline affords rear-seat passengers an additional 48mm of headroom and the seats offer both a 60:40 split fold function and integral ski hatch. Remote-fold levers inside the load-space opening allow the seats to be stowed flat quickly and easily, creating a cargo volume of up to 1675 litres. Rear lift has been reduced through the fitment of a spoiler mounted on the top of the rear hatch to manage the airflow off the top rear surface of the car. 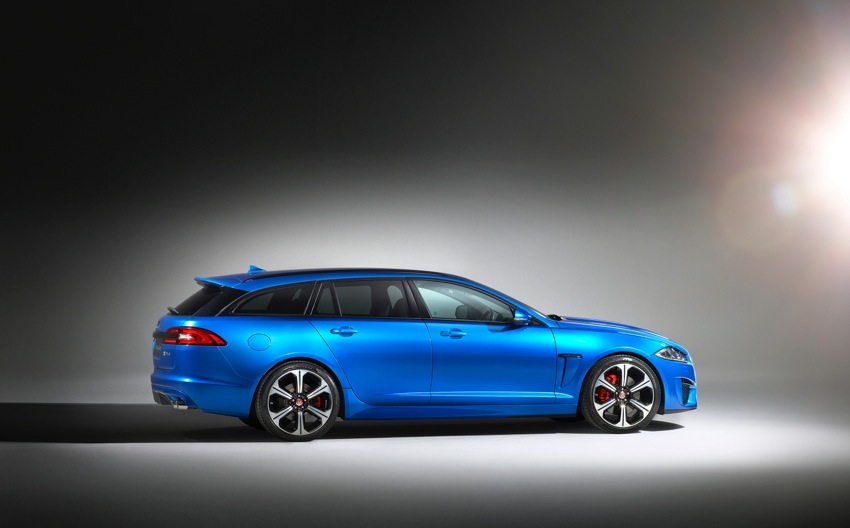 The new, deeper front bumper incorporates larger lower central and side air intakes – the former framed in carbon fibre – in order to provide adequate airflow into the engine bay. A front splitter at the lower edge of the bumper provides the first of a number of aerodynamic changes designed to smooth the passage of the car through the air at very high speeds. The extended side sills and aeroblade mouldings behind the front wheels serve to create a sharp break-off point between the lower bodywork and the road surface in order to keep the airflow attached to the car’s sides for as long as possible. The same thinking dictated the deeper side mouldings behind the rear wheels. This extended rear bumper also incorporates a central, carbon fibre diffuser, deeper than the item found on the XFR and which travels further under the rear of the car to reduce lift. 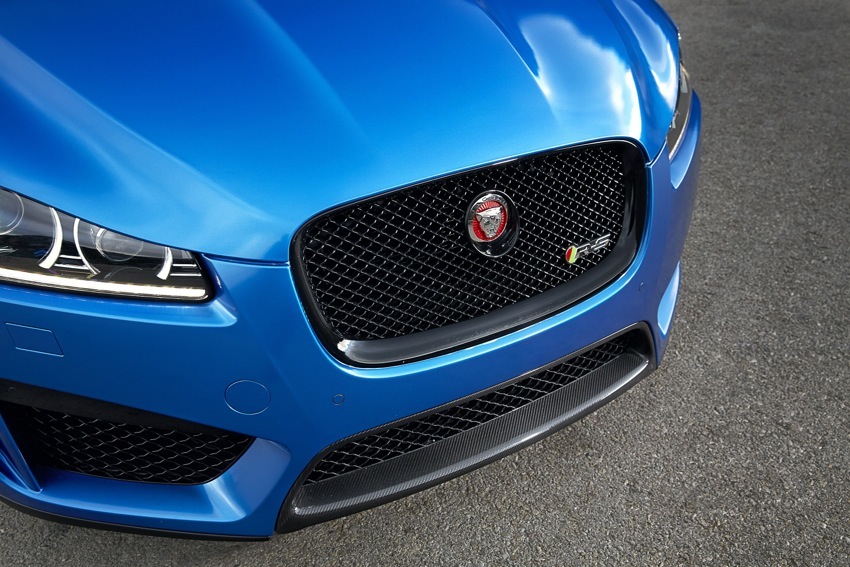 The wider, six-spoke, 20-inch lightweight Varuna forged alloy wheels provide the XFR-S Sportbrake with a purposeful, broad-shouldered stance and come as standard with a dual finish. A ceramic polish is applied to the outer surfaces, its eye-catching appearance contrasting with inner gloss black areas. As an option the wheels can be supplied in either full gloss black or technical grey finishes. 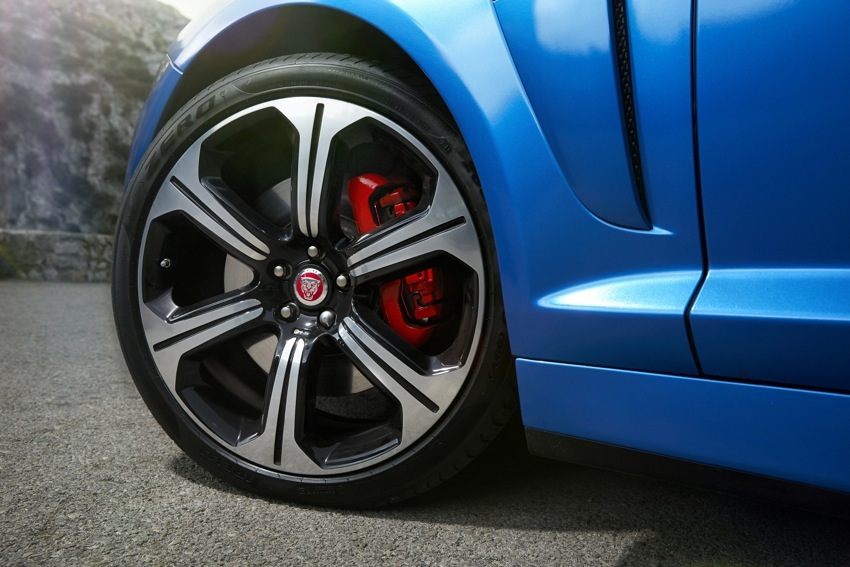 The assertive appearance of the XFR-S Sportbrake is further enhanced through the use of gloss black trim in place of chrome around the grille, within the side vent, around the front and rear screens, windows and across the bootlid. The mesh in the front grilles is also a purposeful gloss black. 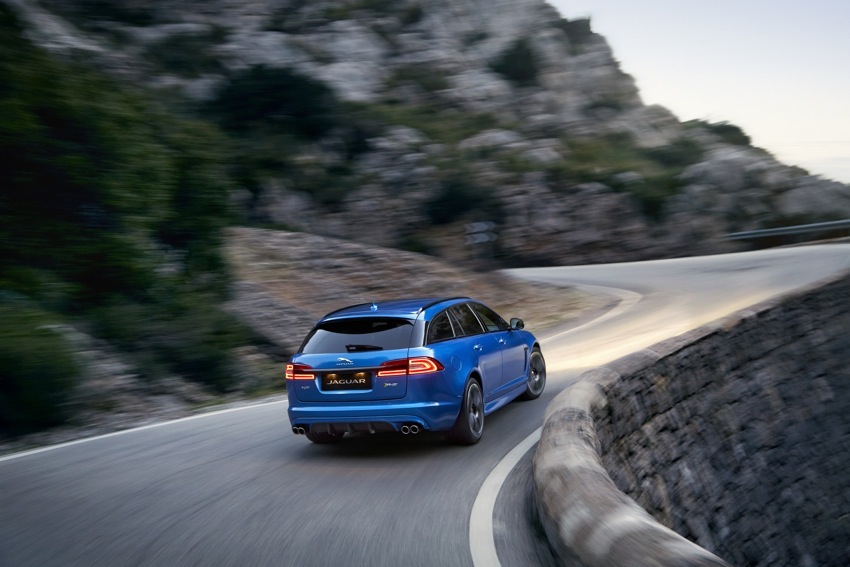 This colour palette is complemented inside the XFR-S Sportbrake with Warm Charcoal leather trim on the seats and doors enhanced through the use of carbon effect leather. Exclusive to R-S cars, this is used on the seat bolsters and arm rests and reflects the use of exotic carbon fibre on the aerodynamic elements of the car. The seats themselves are embossed with the R-S logo and can be finished with a choice of contrast colour micro-piping and stitching in either red, blue or ivory. The same subtle enhancement runs across the top of the dashboard, the fascia of which is finished in a Dark Aluminium unique to the R-S, complete with badging. 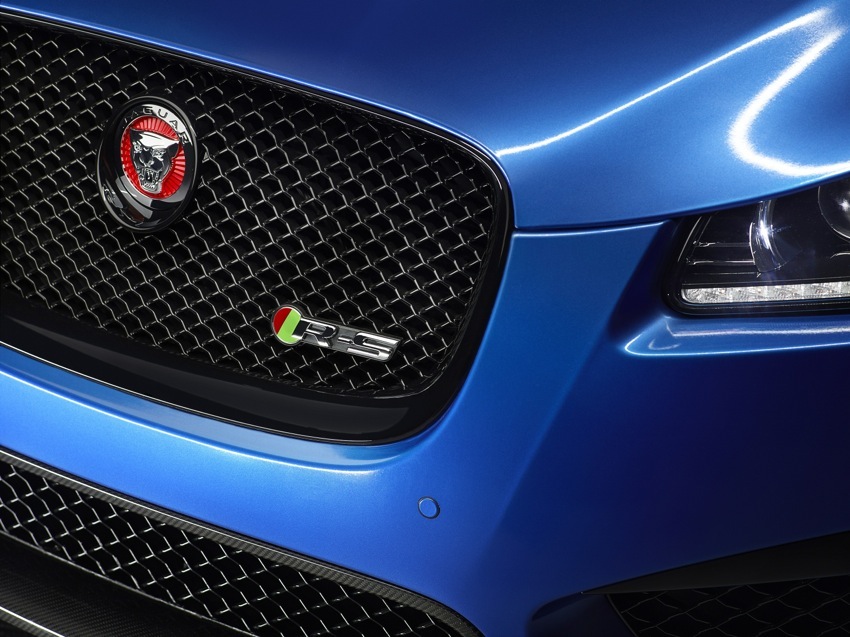 The XFR-S Sportbrake features Jaguar’s acclaimed 5.0-litre supercharged V8 petrol engine in its most potent form matched to an eight-speed transmission with Quickshift functionality. This all-new combination provides a visceral blend of vivid acceleration, driver involvement and control plus entry to the exclusive 300km/h (186mph) club of ultra-high performance cars.

The all-aluminium quad-cam engine delivers not only extreme performance but also tremendous efficiency thanks to the technologies incorporated into it, including spray-guided direct injection (SGDI) and dual independent variable cam timing (DIVCT). 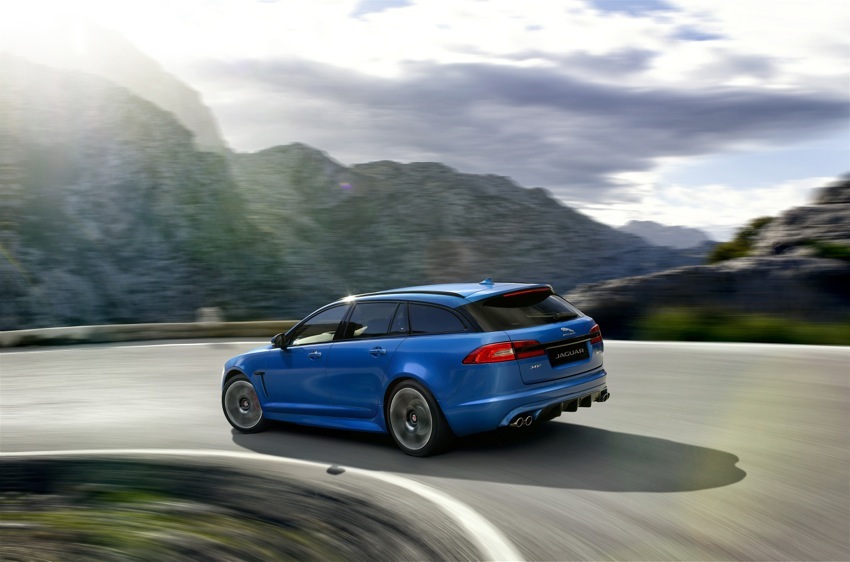 The high-pressure die-cast lightweight aluminium block is stiffened with cast iron liners and cross-bolted main bearing caps, providing refinement to match its power. The four-valve cylinder heads are constructed from recycled aluminium, between them sitting the Roots-type twin vortex supercharger fed by two intercoolers. These feature their own water-cooling circuit to reduce the temperature of the pressurised air to optimise power and efficiency. 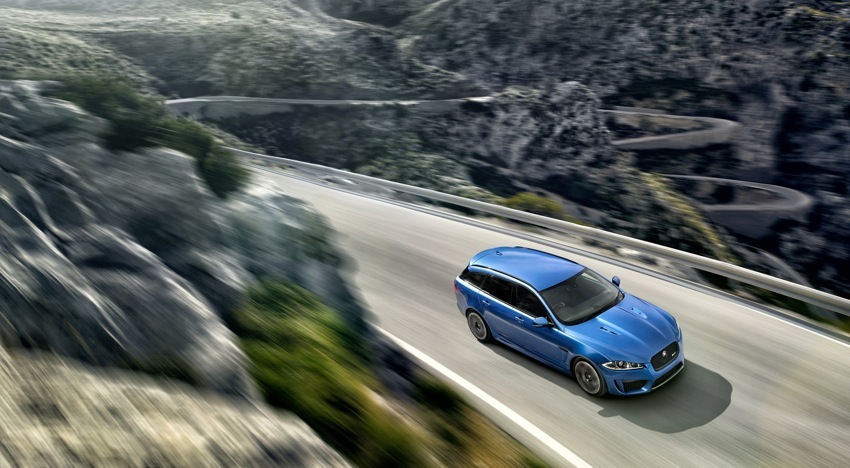 In order to help liberate the additional 40PS and 55Nm of torque over the standard XFR, larger front air intakes in the lower bumper of the XFR-S allow greater volumes of air to be fed into the engine. The intake system also features a symposer that channels more of the induction noise into the cabin, adding to the aural excitement of the XFR-S Sportbrake. 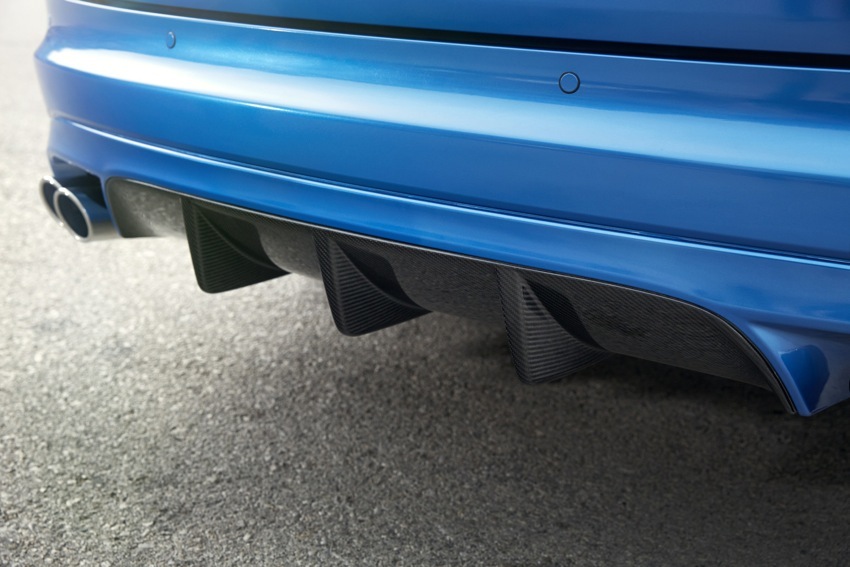 The exhaust system has been optimised in order to channel the waste gases away from the engine with the greatest efficiency. The central silencer has been replaced with an X-piece and near straight-through rear pipes combining to provide an enhanced exhaust note with the added benefit of a motorsport-style crackle on the overrun.

Maximising the benefit of the engine recalibration is the eight-speed automatic transmission with Quickshift technology. Developed for the F-TYPE sports car, Quickshift ideally suits the XFR-S Sportbrake’s focused and involving remit. When the enthusiastic driver changes up a gear manually by using the steering wheel-mounted paddles, the Quickshift technology ensures the quickest, crispest shifts via rapid and precisely timed engine torque intervention. 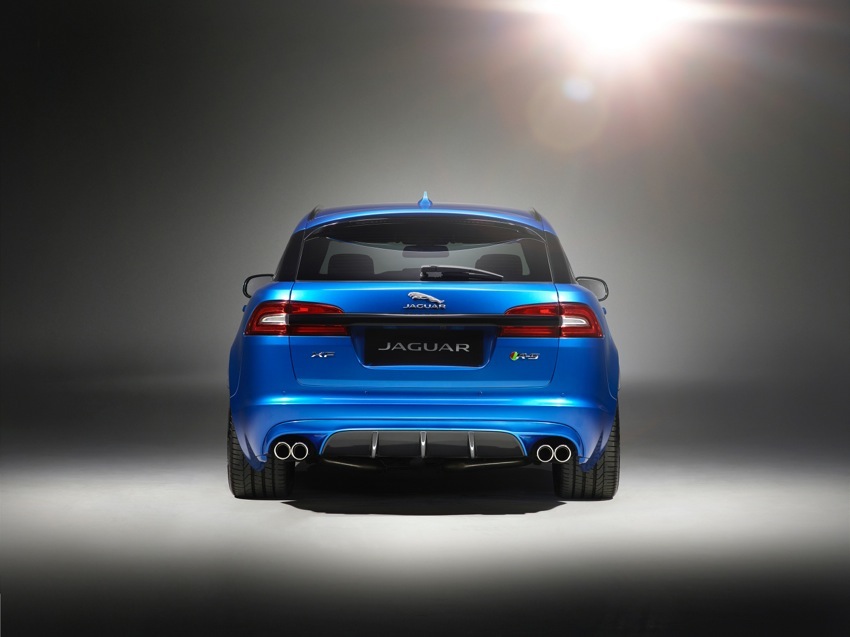 When downshifting (either manually or when in Sport mode) the engine management system automatically blips the throttle to ensure the XFR-S Sportbrake remains balanced and composed, particularly important on entry to a corner. This function also allows the transmission to perform multiple and very rapid downshifts during hard braking. When operating in automatic mode, the transmission can detect the manner in which the car is being driven by monitoring acceleration and braking, cornering forces, throttle and brake pedal activity, road load and kickdown request. On detecting a more enthusiastic driving style, the transmission will automatically make the gearshifts more aggressive and move the shift-up point higher in the rev range.

Corner Recognition senses when the car is negotiating a bend, the transmission holding the correct gear for the exit. The transmission will also recognise when the car is performing a series of overtaking manoeuvres requiring rapid changes in throttle position and, rather than change up, remain in a lower gear ready for the next demand for acceleration. 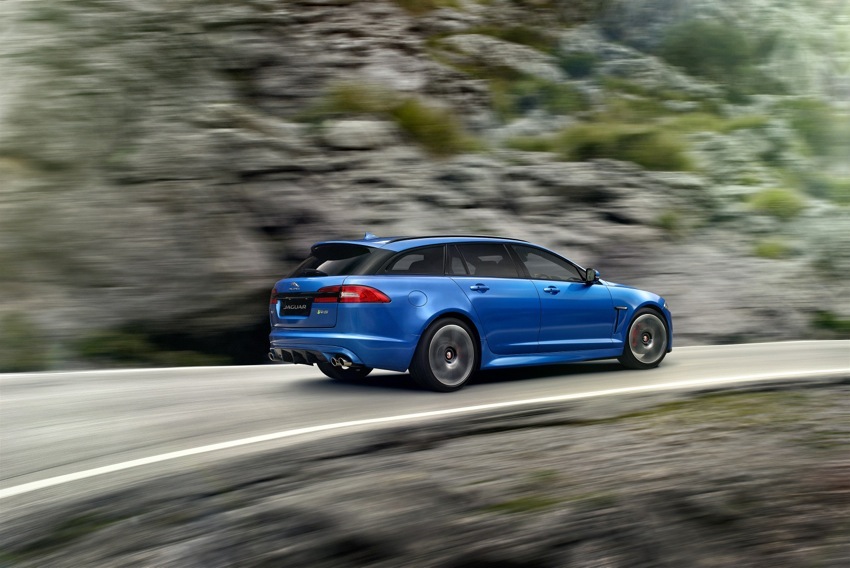 The dynamic characteristics of the XFR-S Sportbrake were informed by the engineering development of both the XKR-S and the F-TYPE, the result being an incredibly agile, responsive and involving car. For the XFR-S Saloon both front and rear suspension systems were uprated and carefully tuned over tens of thousands of miles at Jaguar’s testing centre at the legendary Nürburgring, the high-speed bowl at Nardo in Italy and the engineers’ favourite roads around the Gaydon Research and Development centre and in north Wales.

The main challenge in the development of the XFR-S Sportbrake was to manage the extra rear mass of the car while retaining the sharp turn-in and response of its saloon cousin. In order to achieve this, Jaguar engineers tuned the XFR-S Sportbrake’s rear active suspension to cope with the extra weight of the car’s increased rear mass, with the dampers and springs adjusted to match the mass distribution of the car. The anti-roll bars have been changed and the rear axle has been modified, while the rear brakes have been tuned to work in conjunction with the car’s ABS system. 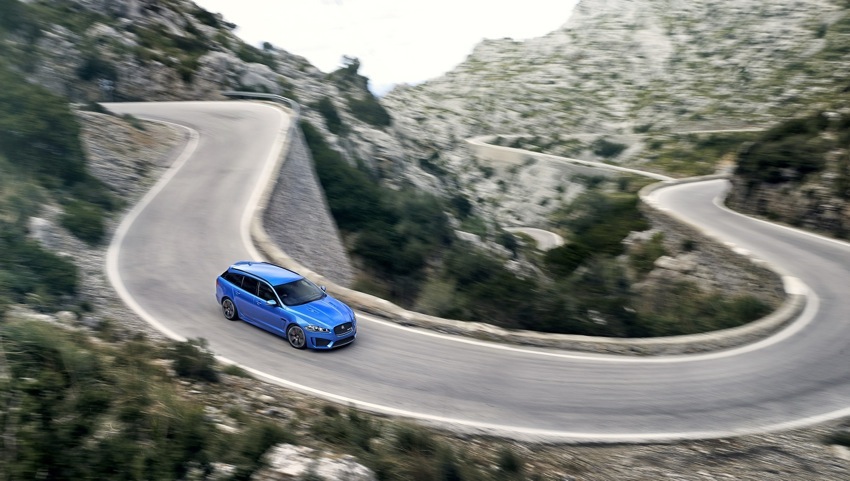 As on the XFR-S Saloon, the front suspension knuckles have been revised in line with those found on the XKR-S to achieve the increased camber and castor stiffness which, along with new wheel bearings, optimise steering and handling precision. The steering system has additionally benefited from the fitment of the valving developed for the F-TYPE.

The rear subframe has enabled revisions to suspension geometry which, allied to stiffer bushes – new rear knuckles and working in tandem with the stiffer springs – increase stability and response over standard XF Sportbrake models. 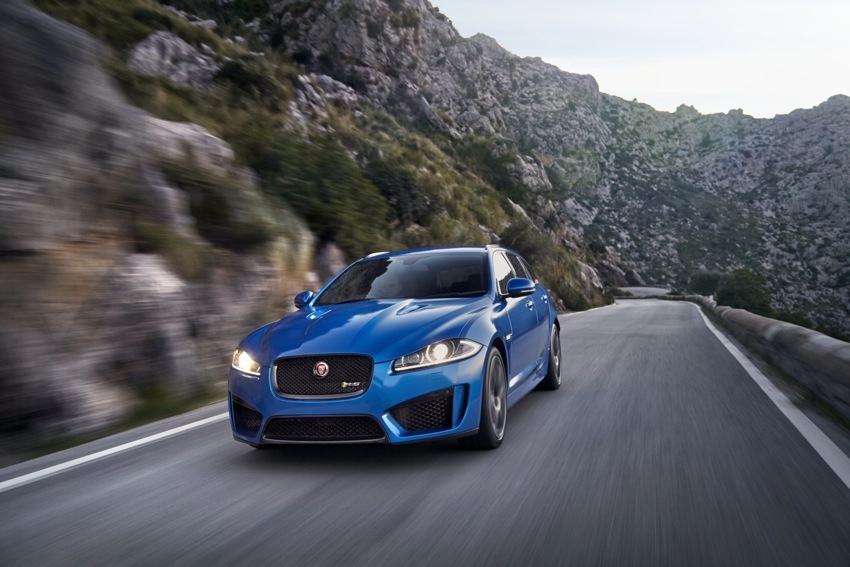 In order to achieve the maximum benefit from the suspension revisions, the XFR-S Sportbrake has lightweight, forged 20-inch ‘Varuna’ alloy wheels. These are half an inch wider at the front and an inch wider at the rear in comparison to the wheels found on the XFR but their construction means there is no weight penalty to be paid.

The tyres, developed in conjunction with Pirelli exclusively for the XFR-S Sportbrake, are 10mm wider all round, being 265/35 and 295/30 front/rear. The difference between the wheel rim and tyre width increases has the effect of pre-loading the sidewall to improve handling and steering response without adversely affecting refinement. 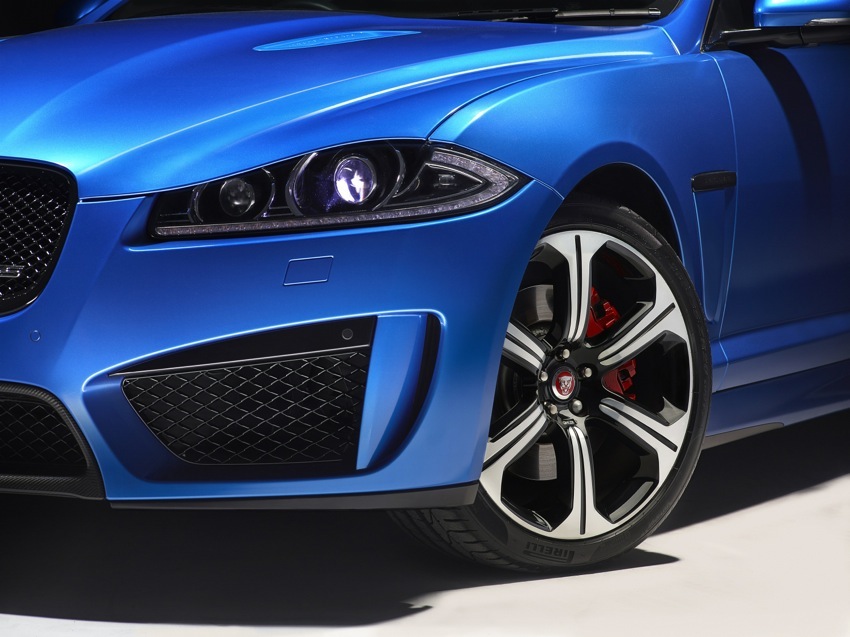 Jaguar’s Adaptive Dynamics system actively controls vertical body movement, roll and pitch rates through the use of continuously variable dampers. The system monitors driver inputs and the road conditions, adjusting damper rates in response up to 500 times a second to optimise stability and agility. The driver’s selection of Dynamic Mode offers enhanced body control through moving the damping rates to the firmer end of the available range. 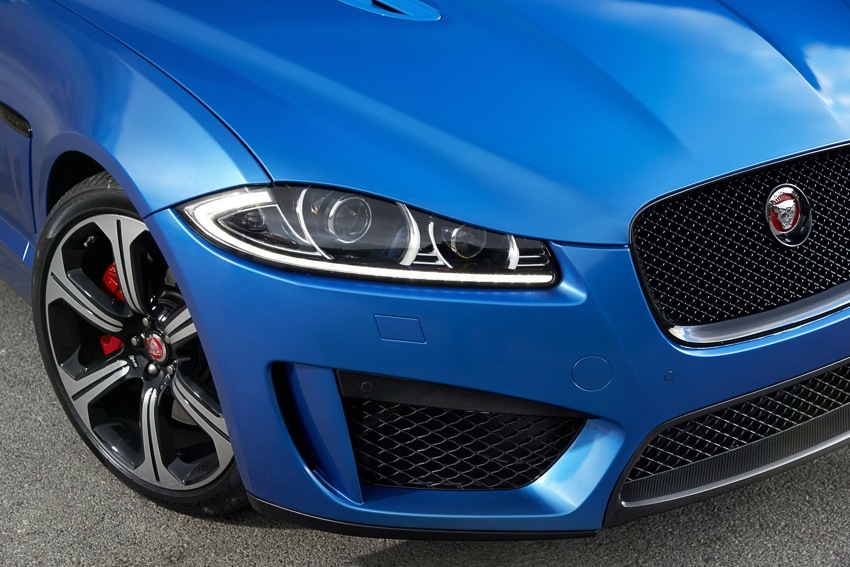 The Jaguar active electronic differential – which can apply full locking torque almost instantaneously when necessary – has been recalibrated in order to exploit the greater grip offered by the wider rear tyres, the more precisely controlled suspension and the engine output. Working in parallel with the differential, the ‘Trac DSC’ setting of the Dynamic Stability Control system now offers the enthusiastic driver more opportunity to explore the outer edges of the handling envelope while nevertheless providing a discreet safety net. 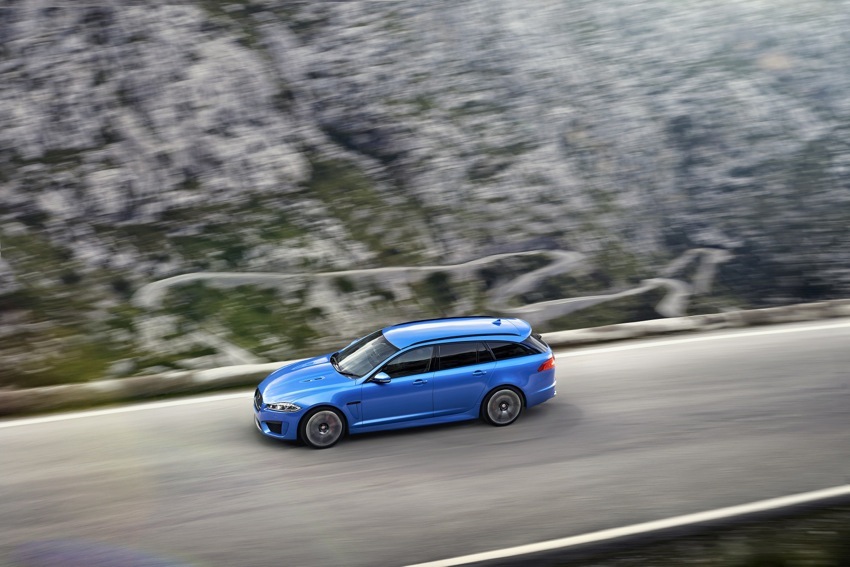 The XFR-S Sportbrake is fitted as standard with a 825W, 18-speaker system from British audio experts Meridian. Recognised by audiophiles as a leader in audio reproduction and fidelity, the system uses digital signal processing to create a sound field that is second to none. The system features Meridian’s proprietary Trifield System that places every occupant at the centre of their own perfectly focused surround-sound arena. 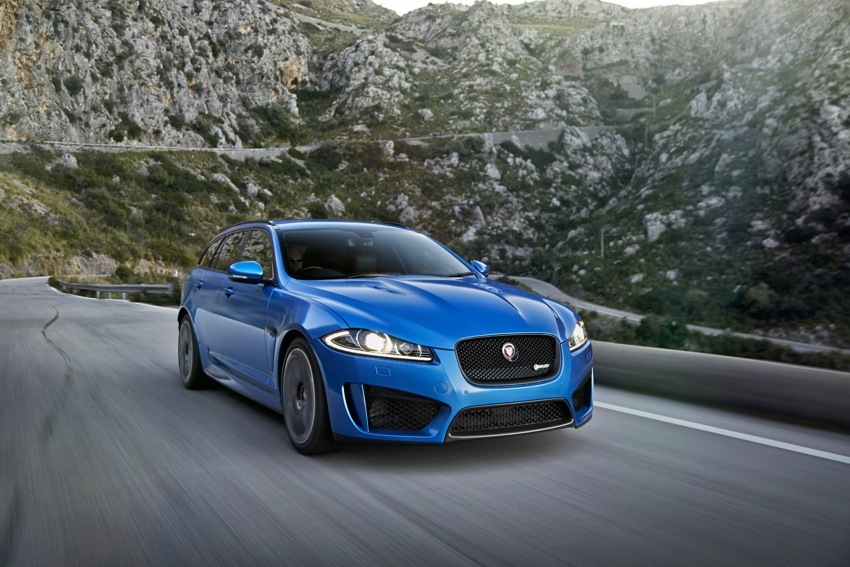 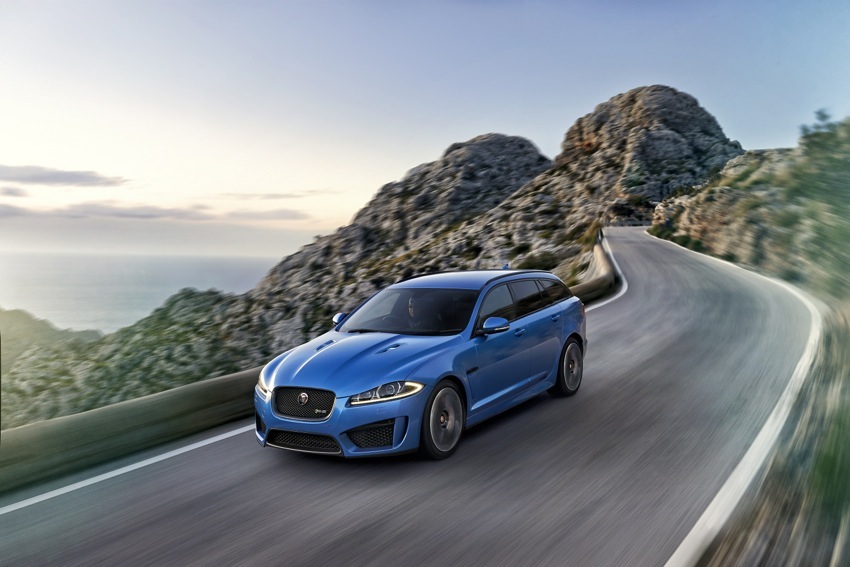 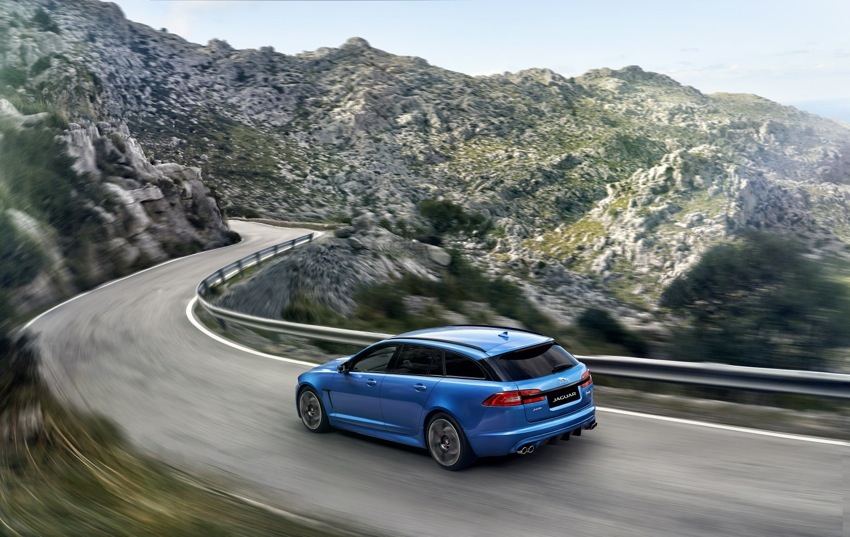 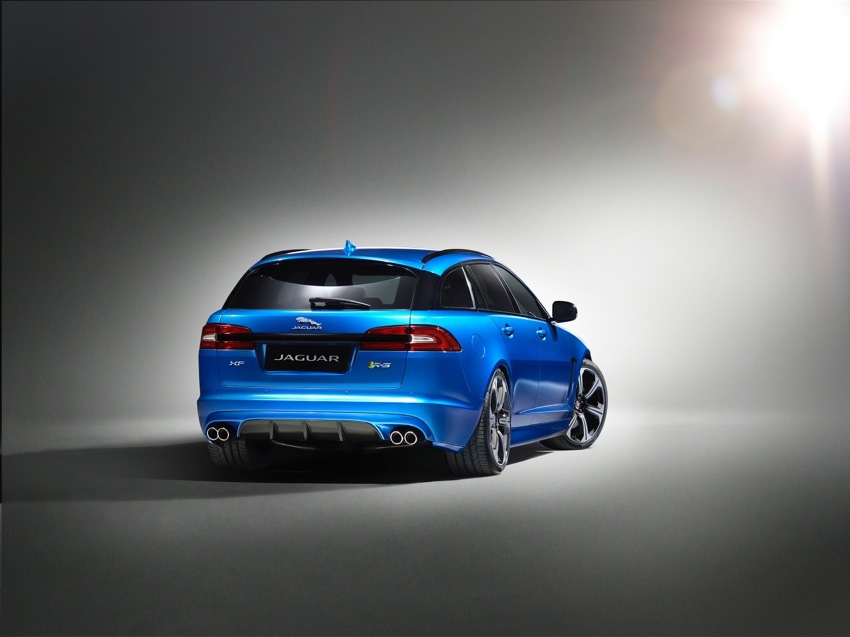 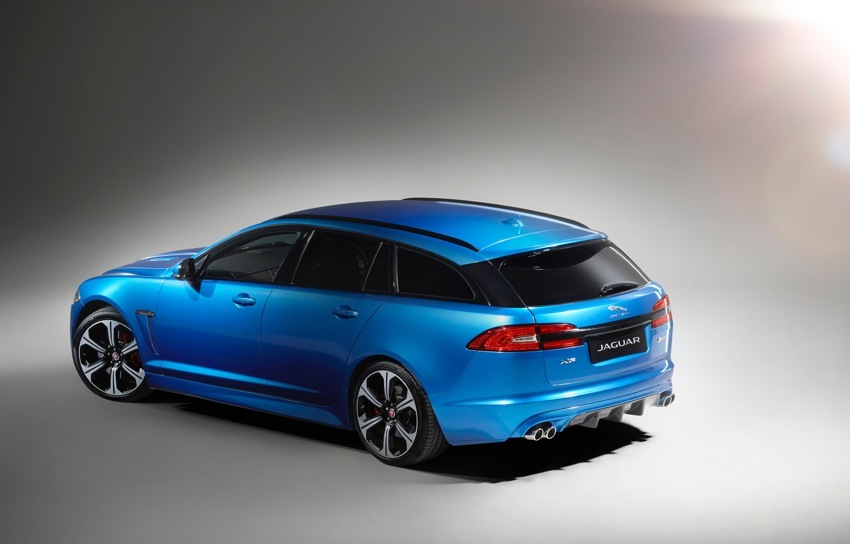