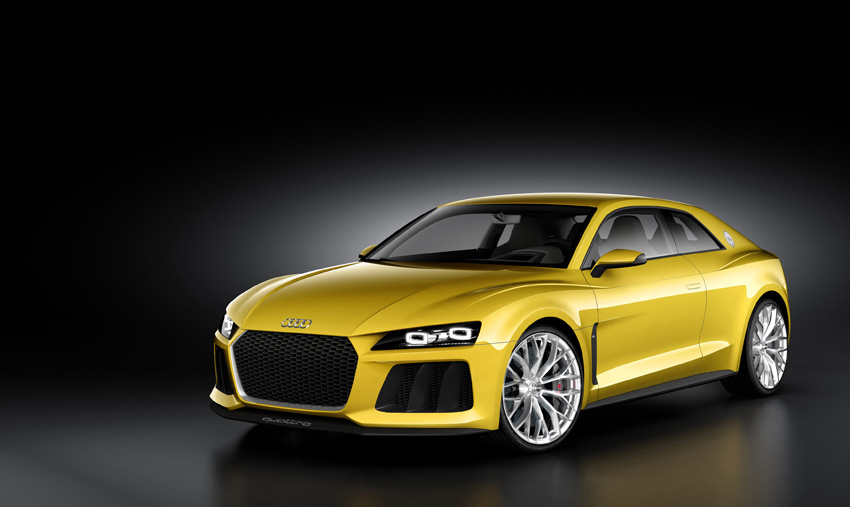 Quattro is Audi and Audi is Quattro

The brand and the technology are indelibly linked. In celebration of the 30th birthday of the Sport Quattro, Audi will present its legitimate successor at the 2013 IAA in Frankfurt am Main. The Audi Sport Quattro concept show car continues the grand Quattro tradition, with a stunning coupe design and plug-in hybrid drive with a system output of 515 kW (700 hp). 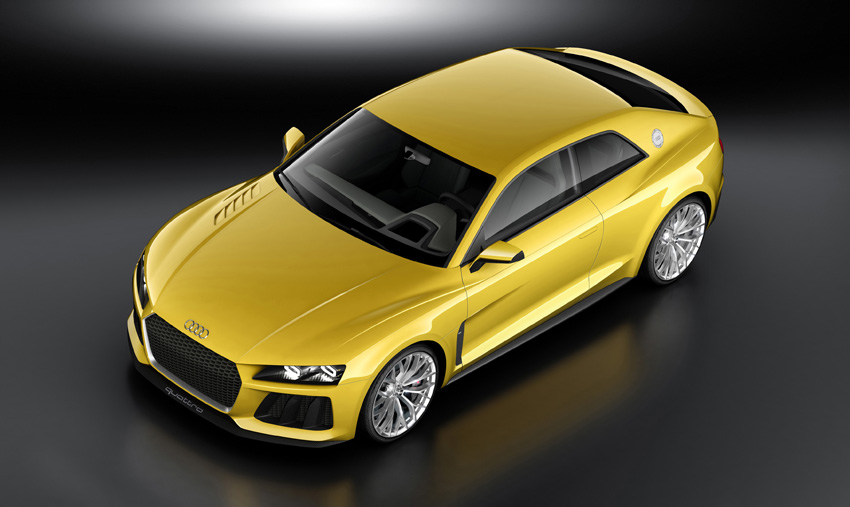 Quattro is more than just a technology – Quattro is a philosophy. The term stands for driving safety and sportiness, technical competence and a dynamic approach to life. Since the debut of the “Ur-quattro” in 1980, Audi has sold more than five million cars with permanent all-wheel drive, far more than any other premium manufacturer worldwide. The strengths of the Quattro concept and its successes in racing have been impressively displayed for over three decades now.

One legendary Audi classic is the Sport quattro, which made its debut at the 1983 IAA and was designed as a homologation model for the World Rally Championship. With 225 kW (306 hp) and many technical innovations, it was the supercar of its day. The short wheelbase, which honed the handling, gave the Sport quattro an unmistakable look. The competition car wrote racing history. Walter Röhrl drove it to a convincing victory in the 1987 Pike’s Peak International Hill Climb in Colorado, U.S.A. 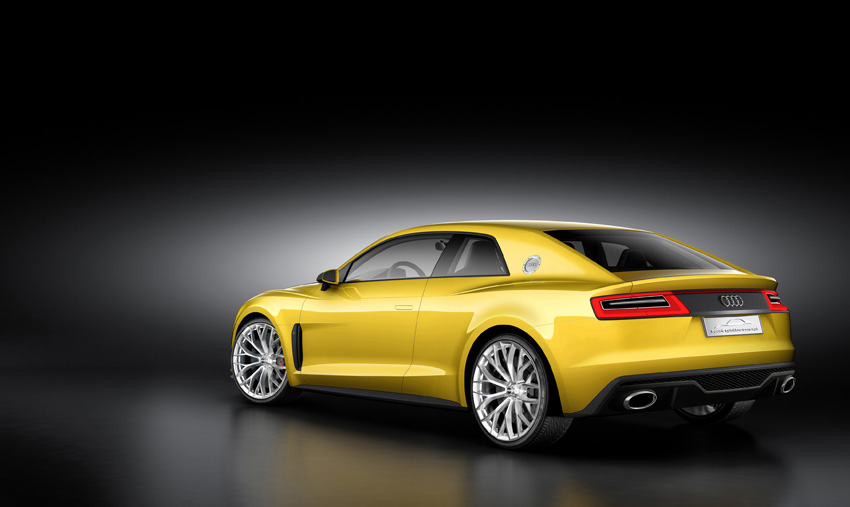 Exterior design: powerful and eye-catching
With the Audi Sport Quattro concept show car, Audi is bringing this grand tradition into the present and taking up ideas again that were first seen in the Audi Quattro concept study three years ago. The coupe combines the DNA of the Ur-quattro with dramatic elegance. It has a powerful, intense road stance, its body tautly perched over the 21-inch wheels. The overhangs are short, the proportions sportily balanced.

Like the Audi Sport quattro, the Audi Sport quattro concept was designed in the spirit of racing. None of its design solutions are an end unto themselves. Each is driven by a technical function, and several are an homage to the quattro models of the early 1980s. These include the angular, flat C-pillars and the rectangular double headlights featuring Audi’s groundbreaking Matrix LED technology, which will be available by the end of this year in the refreshed Audi A8.

Two very flat structures are visible inside the headlight. The wrap-around daytime running lights together with the central low-beam units and the Audi Matrix LED make for a sporty, determined look. The headlights and tail lights are a reinterpretation of lightweight construction. The headlights forsake fascia, exposing the LED heat sinks, while the tail lights reduce glass and housing to a minimum.

The LED high-beam unit of the Audi Matrix LED headlights is comprised of numerous individual diodes. The individual LEDs, which work in tandem with upstream lenses and reflectors, always deliver excellent illumination. They are activated, deactivated or dimmed individually according to the situation. With the number of LEDs, their arrangement and the size and design of the headlights, the new technology offers many fascinating possibilities.

Another design homage are the “blisters” above the fenders. The Audi designers have reinterpreted and strongly accentuated these lines. They give the body even greater emotional appeal and broad shoulders. Throughout the car, sharp contours frame tautly muscular surfaces. With their interplay between convex and concave curvatures, the engine hood, fenders and flanks define the athletic character of the Audi Sport Quattro concept. 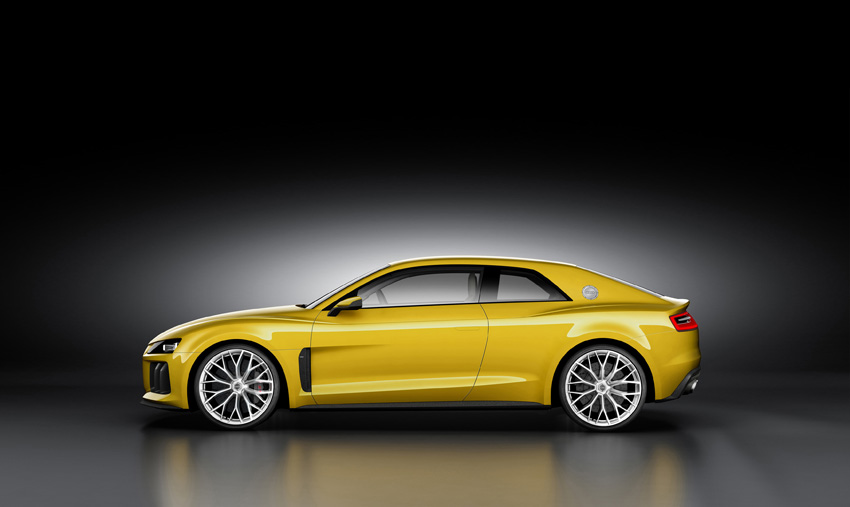 New details: the single-frame grille
The front of the show car is characterized by the hexagonal single-frame grille with a new, sculpted grille insert, a typical element borrowed from racing. Its lower section is virtually vertical; the upper section follows the line of the engine hood. The low grille emphasizes the width of the car. Two large, vertical blades divide each of the large air inlets, and their form is taken up by the creases in the engine hood. The CFRP splitter is shifted far to the front, as on a race car. The grille is part of Audi’s new design philosophy and provides a first glimpse at the future design of the sporty production models.

The proportions of the rear of the car are defined by the combination of a flat greenhouse and broad shoulders. The spoiler at the lower edge of the rear window underscores the car’s width. Another distinctive element at the rear of the show car is the CFRP diffuser, which extends far upward. Similar to the single-frame grille, its upper section is honeycombed, whereas the lower section houses two large, oval tailpipes. Mounted on a black CFRP facing, the tail lights are rectangular – a typical quattro styling cue – and emphasize the width of the car. A spoiler extends from the rear hatch at higher speeds. The luggage compartment, which is reinforced by a solid crossbeam beneath the rear shelf, has a capacity of 300 liters (10.59 cubic ft).

Precisely penned details round out the dynamic look of the Audi Sport Quattro concept. The flared sills are made of CFRP; the power door handles extend automatically to meet an approaching hand. The four rings adorn the front, the rear, the air outlets behind the front wheels and the C-pillars. The center-locking wheels feature a five twin-spoke design. 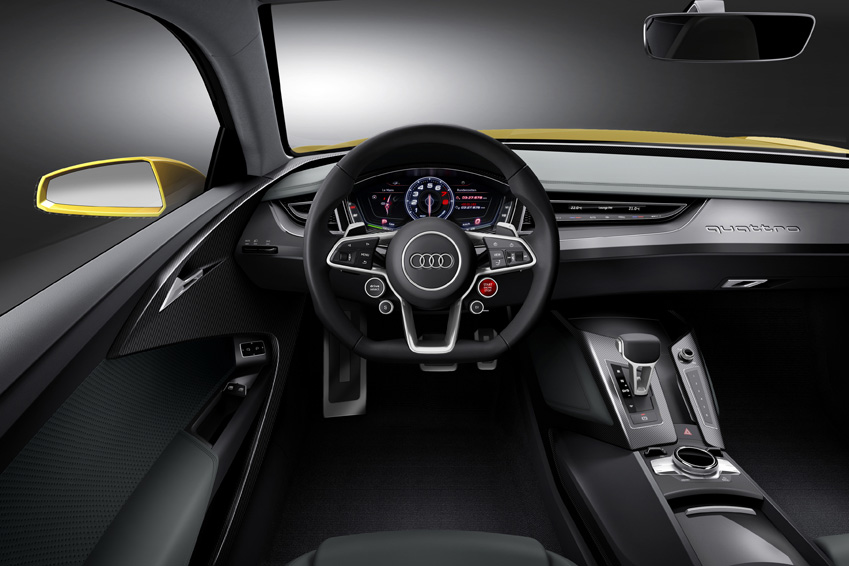 The concept of elegant sportiness carries over to the interior of the Audi Sport Quattro concept. The spacious cabin is awash in dark gray tones and precise lines.

The interior is focused on the driver. The steering wheel, digital instrument cluster and head-up display are all in the direct field of view. A line running below the windshield encircles both the driver and passenger and integrates all ergonomic functions such as the door openers. 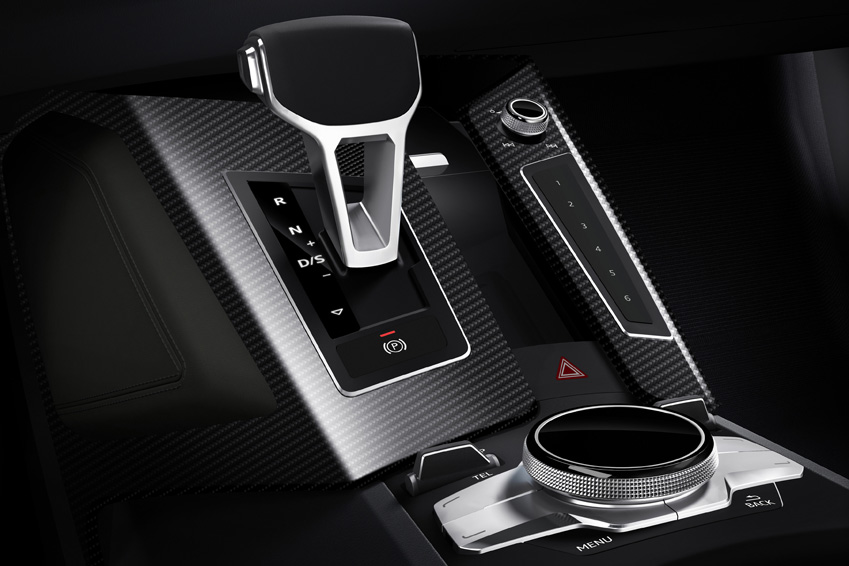 The quattro drivetrain runs beneath the continuous center console. Sporty racing bucket seats with folding backs, sculpted side bolsters and integrated head restraints up front and full rear seats offer space for four. The folding mechanism provides access to the rear. A crossbeam behind the rear seats provides for additional rigidity.

Great attention to detail is reflected in both the choice of materials and the workmanship. The multifunction sport steering wheel provides a glimpse into future sporty production models.

The control concept is also focused on the driver. All important information is displayed in the fully digital instrument cluster, another show car feature. The multifunction sport steering wheel is used to switch between a number of virtual 3D displays.

Choices include a Race mode with central speedometer, track information and a stopwatch, for example, or the Setup mode with detailed information about numerous race tracks. In addition, the touchwheel of the characteristic Audi MMI control unit makes it easy to enter information.

Another highlight is the innovative air conditioning control unit, which is integrated directly into the air vents. Temperature, intensity and air flow can be controlled using one and the same element. The display in the vents shows either important media information or the air conditioning settings.

Powerful performance: the plug-in hybrid drive
The plug-in hybrid drive makes the Audi Sport quattro concept a breathtakingly dynamic coupe. System output is 515 kW (700 hp); system torque is 800 Nm (590.05 lb-ft). Power flows through a modified eight-speed tiptronic to the quattro powertrain, which features a sport differential on the rear axle. According to the applicable standard, the show car consumes on average 2.5 liters of fuel per 100 kilometers (94.09 US mpg), a CO2 equivalent of 59 grams per kilometer (94.95 g/mile).

The combustion engine is a four-liter, twin-turbo V8. It produces 412 kW (560 hp) and 700 Nm (516.29 lb-ft) of torque. The cylinder on demand (COD) system, which deactivates four cylinders under part load, and a start-stop system make the sonorous eight-cylinder unit very efficient.

Located between the 4.0 TFSI and the transmission is a disc-shaped electric motor producing 110 kW and 400 Nm (295.02 lb-ft). It draws its traction energy from a liquid-cooled lithium-ion battery in the rear with a capacity of 14.1 kWh. The show car is charged via an Audi wall box, which uses intelligent charge management to ensure the optimal feed of energy to the lithium-ion battery. The Audi Sport quattro concept can cover up to 50 kilometers (31.07 miles) on electric power alone. An intelligent management system controls the interplay between the two drives as needed, and the driver can choose between various operating modes.

The customer can choose between various characteristics for the Audi Sport quattro concept depending on the operating and driving strategy. A choice of three modes is available. EV mode is for purely electric driving; Hybrid mode for maximum efficiency and Sport mode for maximum performance.

In EV mode, only the electric motor is active. With a peak electric output of 110 kW and 400 Nm (295.02 lb-ft) of torque, electric driving both inside and outside the city is possible. An active accelerator indicates the transition to hybrid operation to the driver so that he/she can consciously control the switch between electric and hybrid vehicle.

In Hybrid mode, environmental and route data are used to compute the optimal use of the electric motor and combustion engine for fuel efficiency and implement this via the operating strategy. If navigation is active, the route is optimized for efficiency. This mode also includes the ability to customize the operating strategy. If the driver wants to retain a certain amount of electric range or to drive certain route segments on electric power, they can use the Hold or Charge function to precisely adjust the charge of the battery even without charging from the power grid.

In Sport mode, the operating strategy sets the drive system for maximum power and performance. The electric boost function supports the combustion engine in all driving situations. The energy management system ensures that the battery always has sufficient charge.

When the V8 and the electric motor work together, the Audi Sport quattro concept accelerates from 0 to 100 km/h (62.14 mph) in 3.7 seconds – much like the powerful Audi rally cars once did. Its top speed is 305 km/h (189.52 mph). The lightweight construction concept also plays a large part in this dynamic performance. The occupant cell combines ultra-high-strength steel panels and cast aluminum structural elements. The doors and fenders are made of aluminum, and the roof, the engine hood and the rear hatch are made of carbon fiber-reinforced polymer. The result is a curb weight including the battery pack of just 1,850 kilograms (4,078.55 lb).

The show car’s chassis is easily able to handle the drive system’s power. Handling is as dynamic as it is stable. The front suspension features five control arms per wheel; the rear suspension follows the Audi track-controlled trapezoidal link principle. Tautly tuned springs and dampers connect the Audi Sport quattro concept firmly to the road. The dynamic steering varies its ratio as a function of driving speed. The brake calipers grip large, carbon fiber-ceramic brake discs, and the tire format is 285/30 R 21.