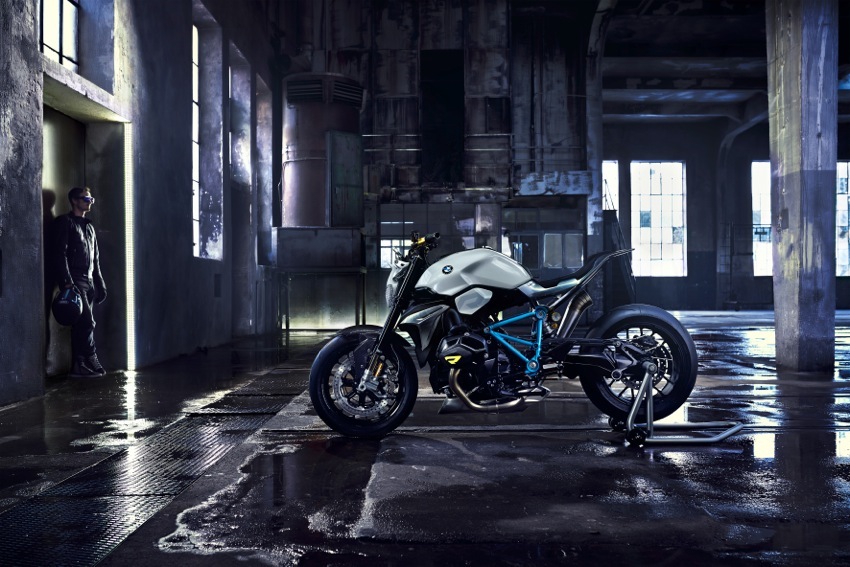 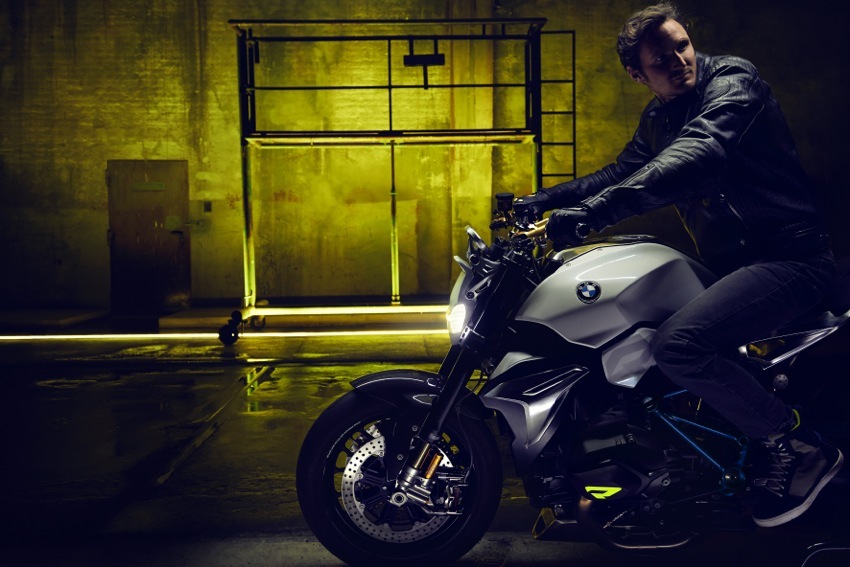 The BMW boxer engine has always promised impressive performance and supreme power delivery across the entire engine speed range. In its latest generation it generates 92 kW (125 bhp) at 7,750 rpm from 1,170 cc with a maximum torque of 125 Nm at 6,500 rpm. The engine is also visually mid-point of the BMW Concept Roadster. The compact proportions with low front and high rear form a wedge-shaped silhouette around it which accelerates the bike even when stationary. The crouching posture with a powerful focus on the front wheel and the very short rear promise agile, light-footed handling. Split colouring makes for a visual separation of the dark engine area below and the light seating area above with the fuel tank and rear section. The dark bottom section moves the BMW Concept Roadster visually closer to the road surface, thereby emphasising a road-oriented riding experience. Meanwhile the lighter coloured upper section conveys lightness and a low visual centre of gravity. 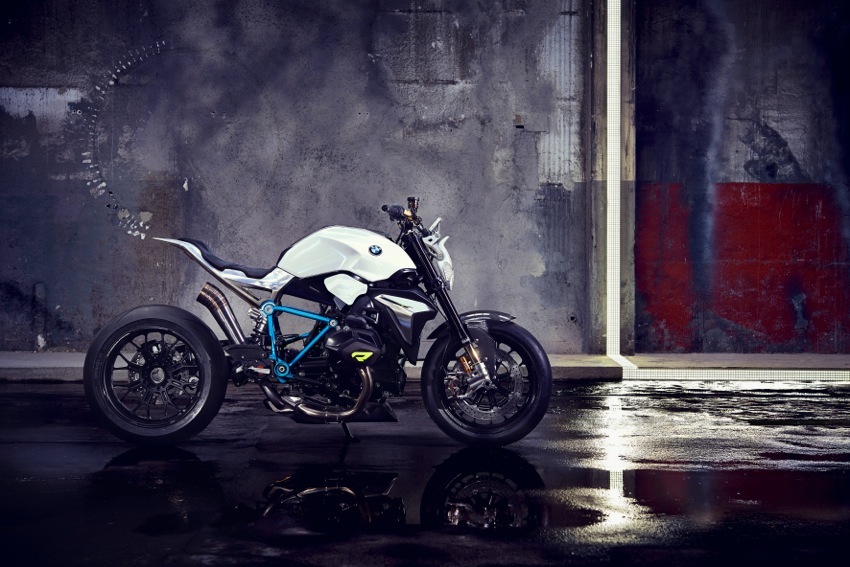 The headlamp presents a modern, dynamic interpretation of the classic circular headlamp. Matted LED light banks in full LED technology shape the distinctive “face” of the BMW Concept Roadster, giving it an extremely technical look. What is more, the LED technology makes the headlamp mask flat and very light-looking from the side perspective. Behind it, a reduced instrument panel provides all the relevant information in exclusive, high-end style. 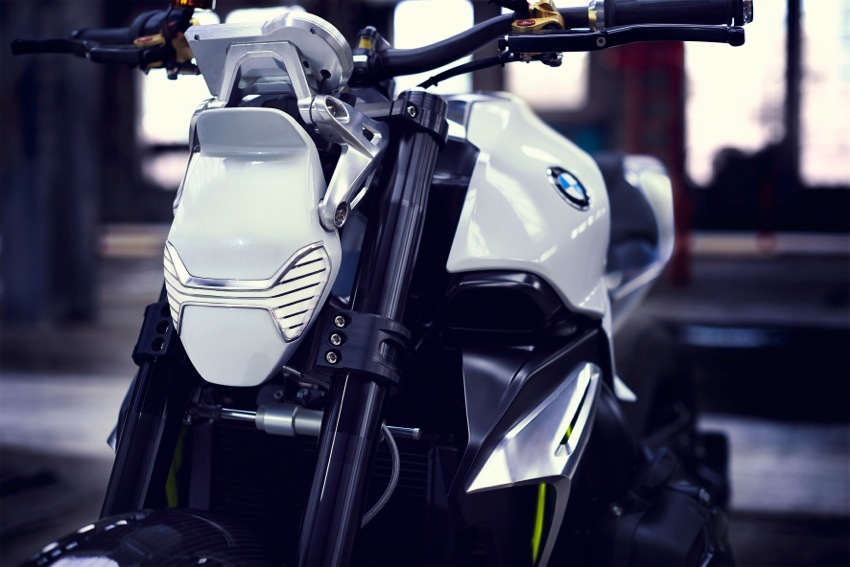 Emotional surface configuration.
The interplay between the fuel tank, seat and radiator is modelled to perfection in flowing style. The experienced hands of the BMW modellers have given the surfaces an emotional quality that no computer would be capable of recreating. The surfaces provide a detailed reflection of the characteristics of the BMW Concept Roadster: the sculpturally designed fuel tank in Sparkling Light White expresses the forward-looking orientation and dynamic performance of the BMW Concept Roadster with its precise modelling. Its shape also provides an ergonomically perfect knee grip for optimum handling. A cover made of matted stainless steel adds a high-end yet robust accentuation at the centre of the fuel tank. 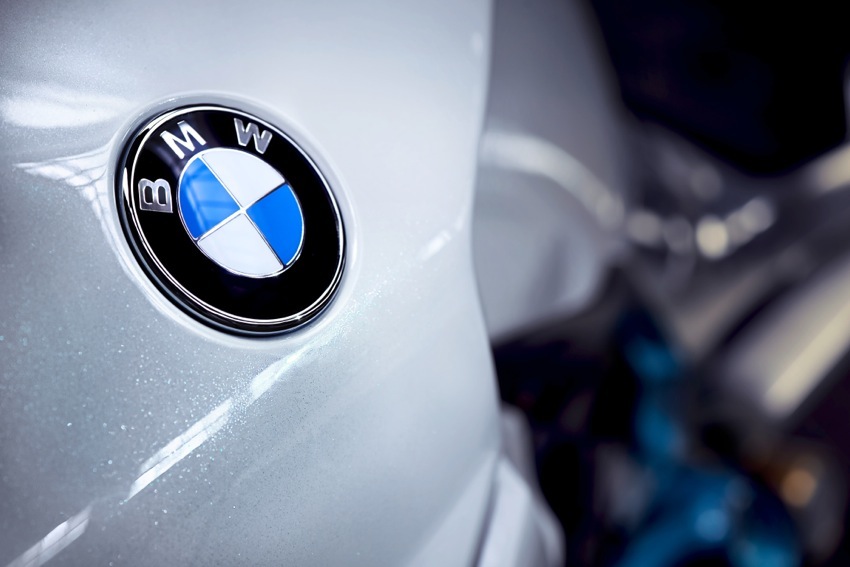 Light and finely wrought – the aluminium rear.
A striking highlight develops out of the fuel tank: the steep rear section made of gloss milled aluminium. The self-supporting rear structure is fashioned from a single piece, thereby enabling a very reduced and finely wrought rear element. The deliberately visible milling marks create a rough, almost industrial look which contrasts with the painted and anodised surfaces. The expressively modelled surfacing on the top and bottom of the rear element finely translates the emotional aspirations of the BMW Concept Roadster. The integrated single seat is borrowed visually from motor racing – a stylish interpretation of the bike’s dynamic ambitions. Meanwhile a Neon Yellow accent in the lower area of the seat cushion adds a bold dash of colour contrast underneath the perforated Alcantara leather. Additional colour accents in Neon Yellow are to be found on the valve covers and on the cooling ribs inside the air inlets of the side trim, further breaking up the overall view from the side. The tubular space frame provides a visual highlight as a load-bearing element in Sparkling Racing Blue, a highly expressive finish that lends a touch of modern sporty style to a traditional element of a boxer-powered BMW roadster. With the interplay of the typical BMW Motorrad white on the fuel tank along with the radiant blue, the tank and frame present a characteristic yet also contemporary interpretation of the traditional BMW Motorrad colours. 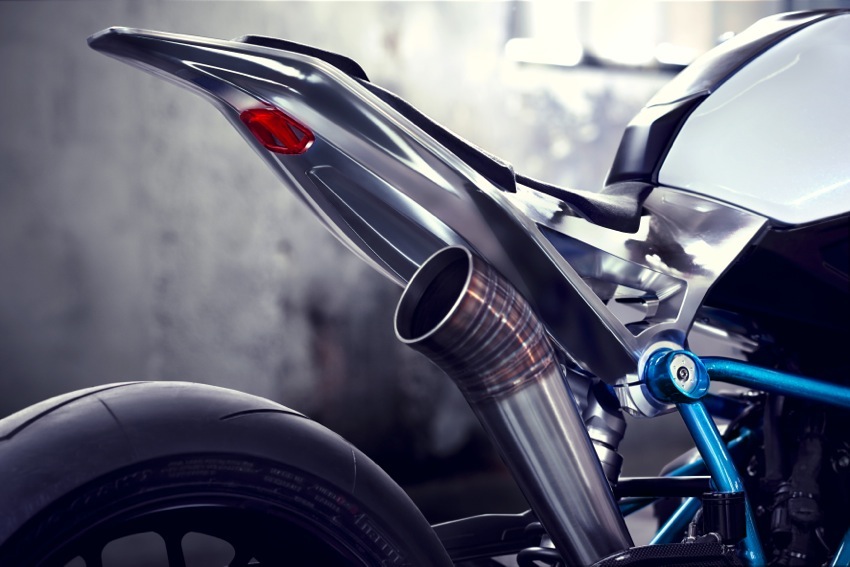 Premium-quality milled aluminium parts.
In addition to the rear structure, there are other milled aluminium parts which underscore the technically sculptured look from the side perspective. The most prominent features here are the lateral air intakes. They are also made of gloss aluminium with milling marks and are shown to excellent effect against the black surfaces of the radiator. They trace a triangle open to the front which is formally based on the “gill” elements of the BMW supersports motorcycles. Performing the function of channelling air to the radiator, they also emphasise the dynamic gesture of the side. The cooling ribs in Neon Yellow inside them are only seen on closer inspection. 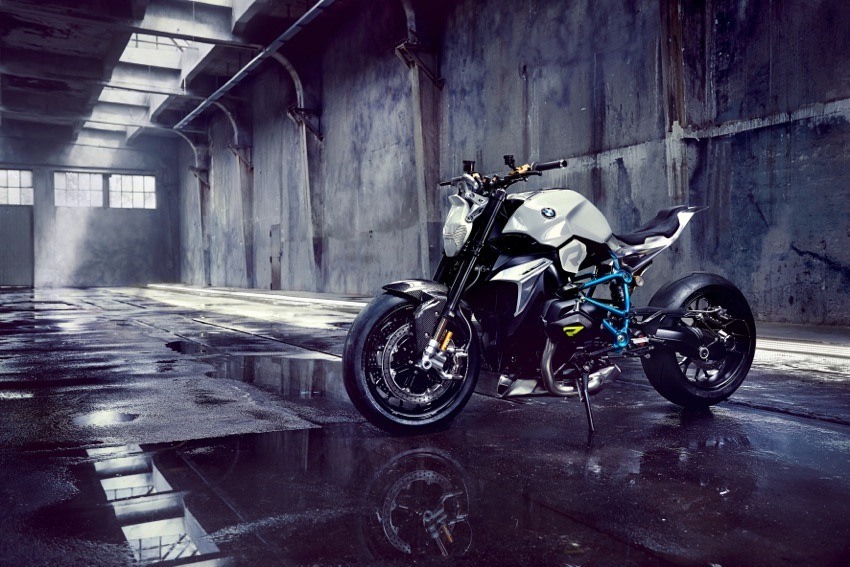 One particular detail is the valve covers made of milled aluminium: their three-dimensional shaping lends a forward orientation to the fuel tank surfaces, giving the BMW boxer engine a highly athletic look. In addition, a protection pad on the valve covers indicates that the BMW Concept Roadster can and should be taken round bends at an extreme banking angle. Inspired by the knee pads of a racing suit, it gives the BMW Concept Roadster a touch of motor racing flair. An accent in Neon Yellow further underscores this radical element. 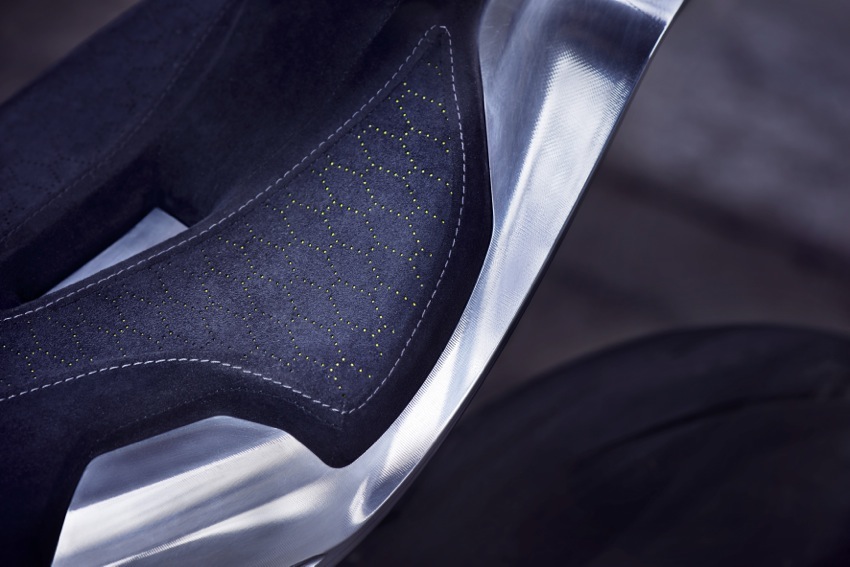 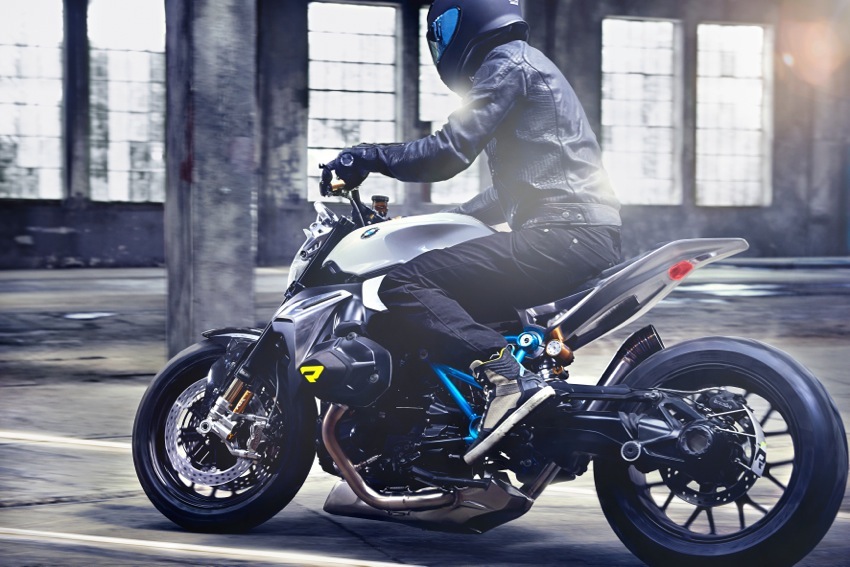 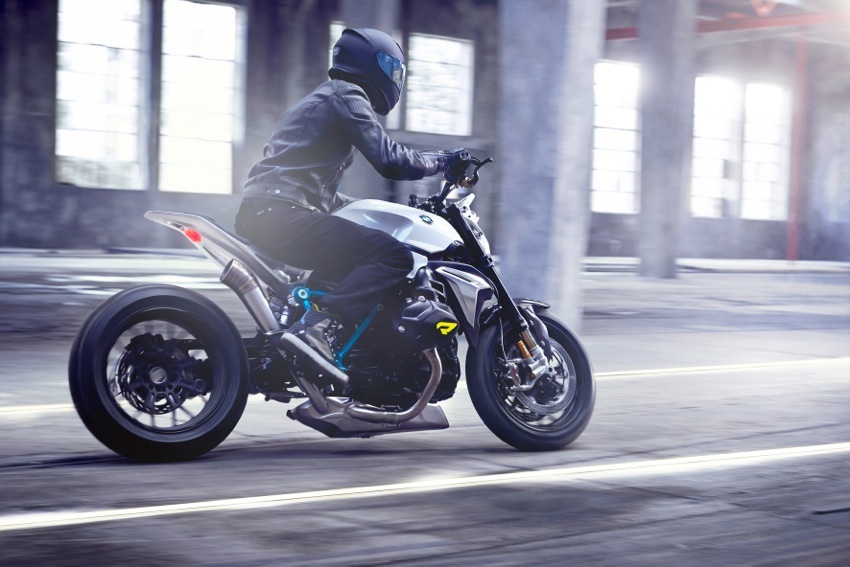 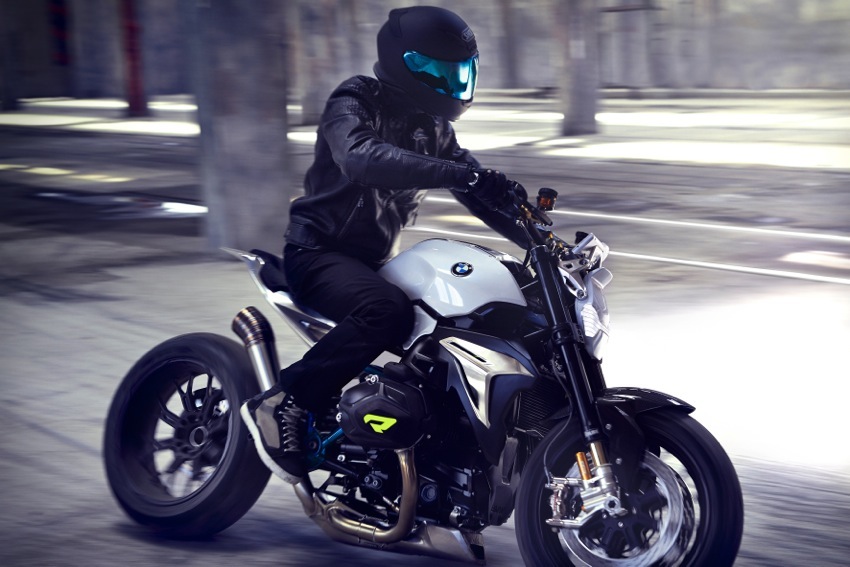 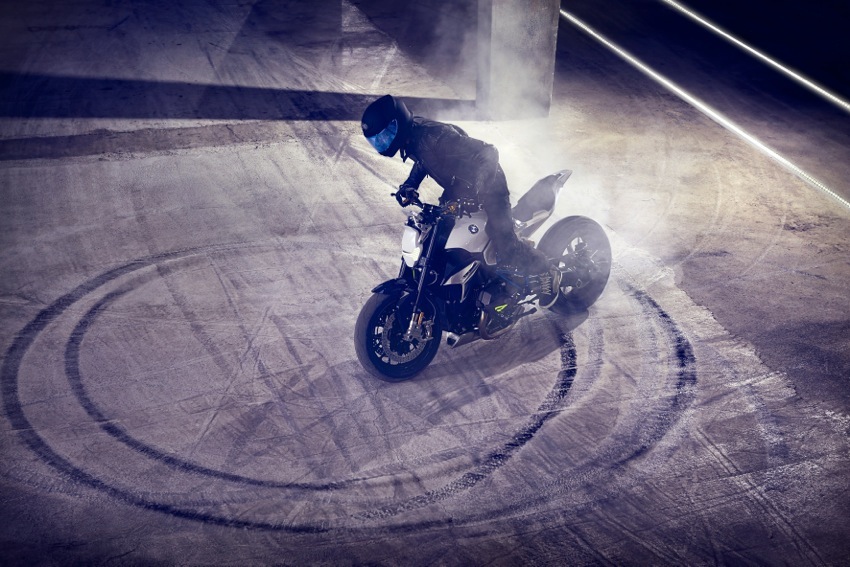 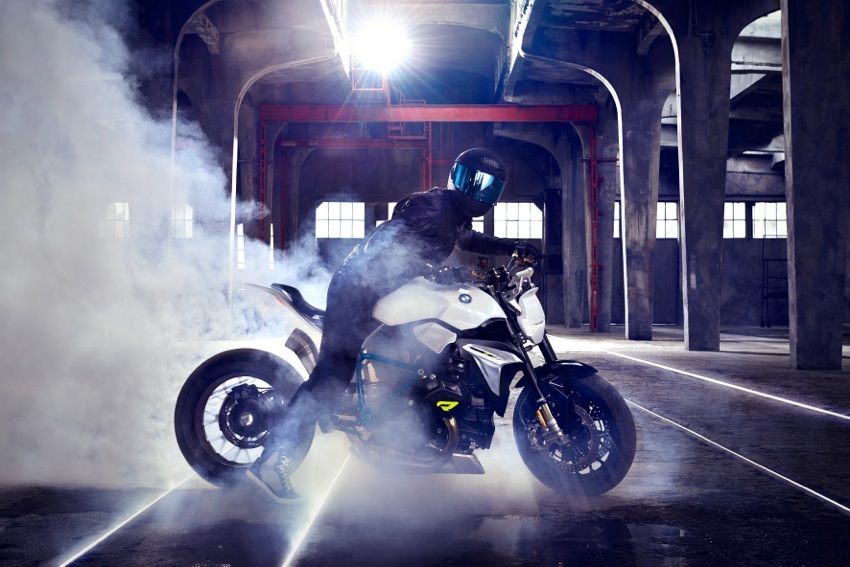 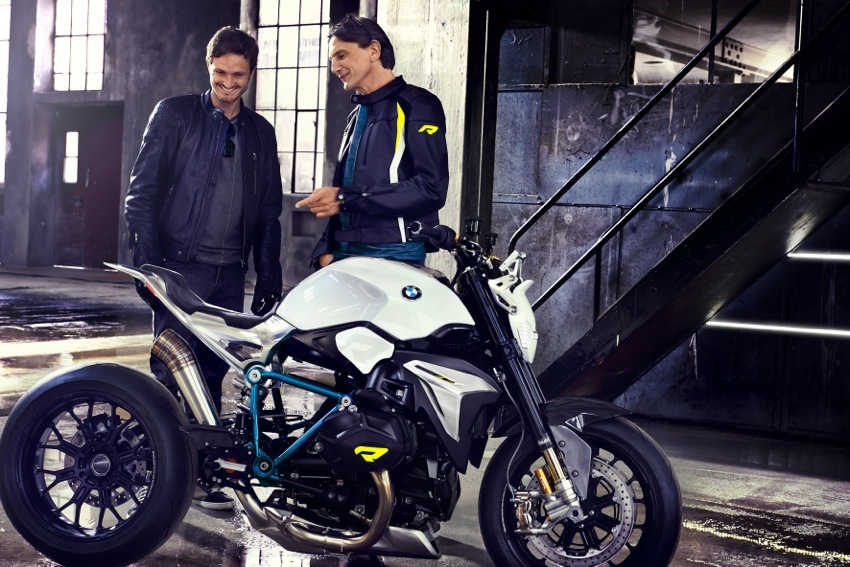 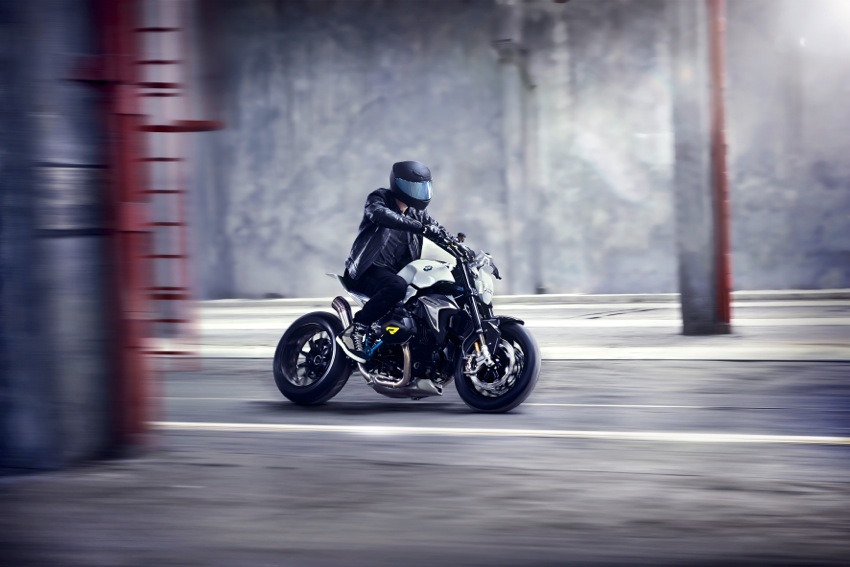 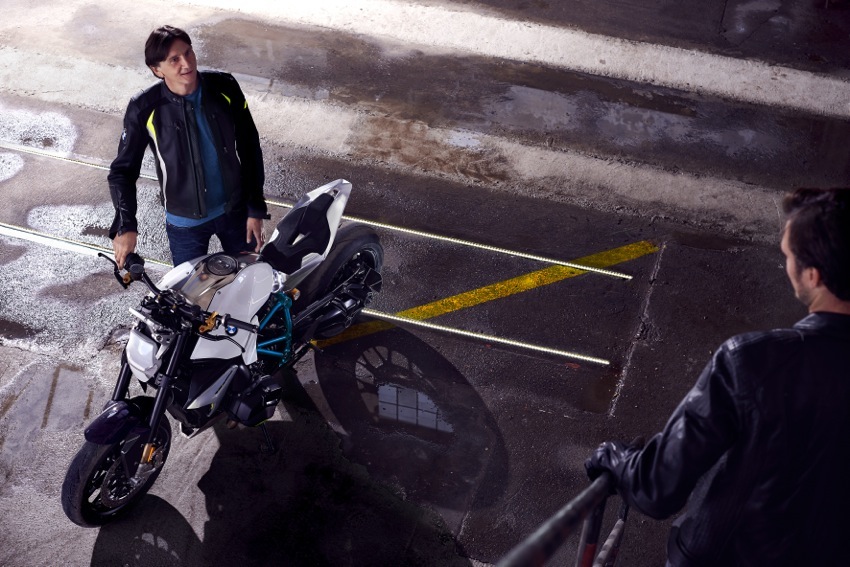 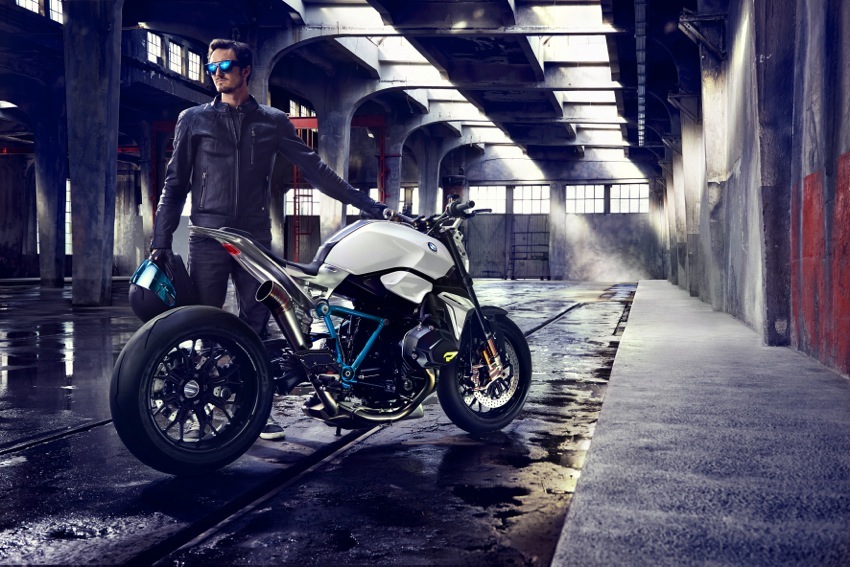