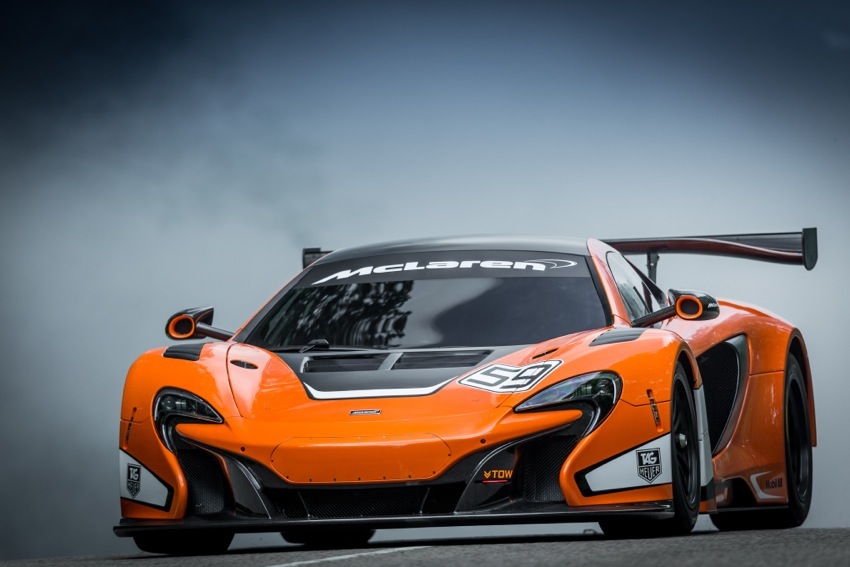 In the grounds of the famous Goodwood Estate, McLaren GT has today confirmed first details of the McLaren 650S GT3 – the latest generation track-focused racer which will contest GT3 championships across the globe from the 2015 season. Building on the highly successful 12C GT3, which has firmly re-established McLaren at the front of the GT grid over the past three seasons, the 650S GT3 was unveiled in front of fans and the global motorsport media at the 2014 Goodwood Festival of Speed. 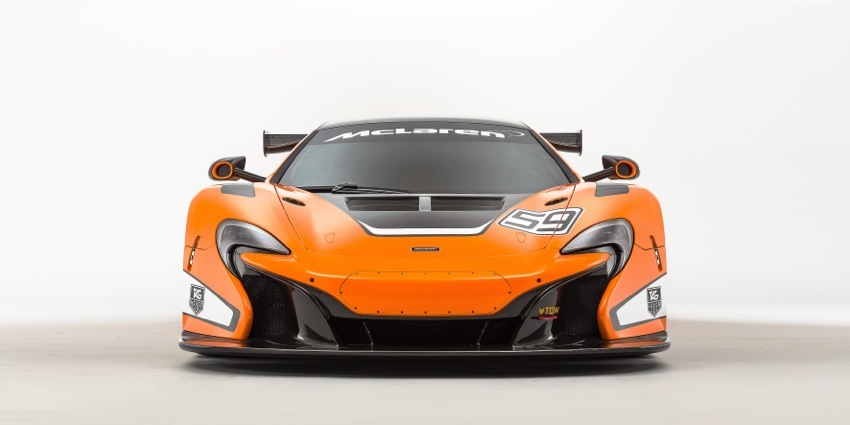 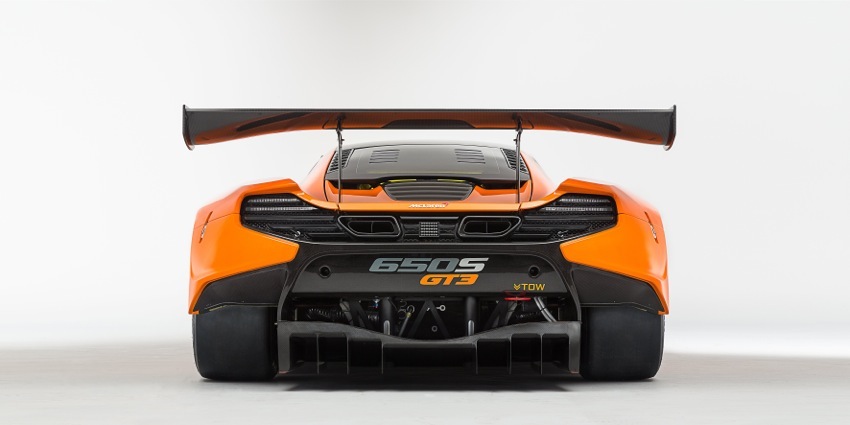 As the 12C GT3 continues claiming trophies around the world, the 650S GT3 has big shoes to fill, but it has been designed to do just that. The menacing and purposeful-looking racer is the second-generation GT3 car from McLaren GT, the GT race car building arm of McLaren, and follows in the slipstream of the 12C GT3, now competing in its third competitive season. To date, the 12C GT3 has secured three championship titles, 51 race victories and 71 further podiums, a number that continues to rise on a weekly basis, and currently leads the highly competitive Blancpain Endurance Series and the GT Asia championship. 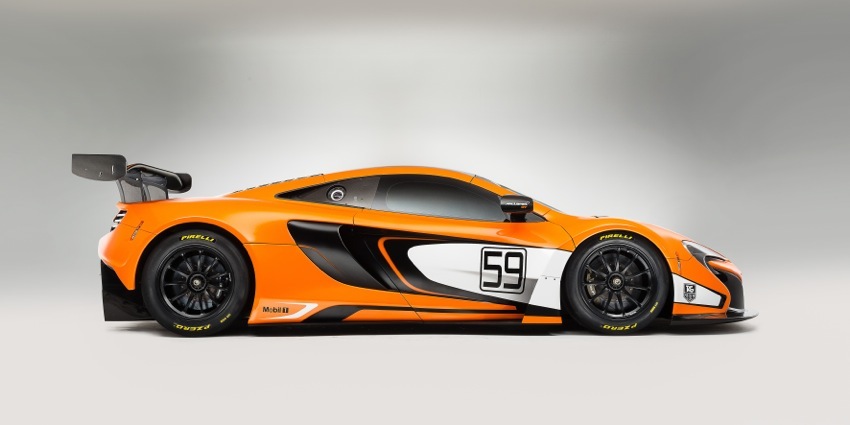 Based on the recently unveiled McLaren 650S, and built around the same lightweight carbon fibre MonoCell chassis, the GT3 iteration has been honed using CFD technology and the latest in automotive and motorsport simulation to offer enhanced aerodynamics and improved levels of cooling. At the front, an aggressive splitter and larger air intakes dominate the purposeful new look, incorporating the familiar McLaren ‘face’ – albeit a more aggressive and menacing version, while on the flanks, the all-new lightweight carbon fibre bodywork wraps around reprofiled air intakes, which offer further optimised cooling. The fixed carbon fibre rear wing works in tandem with the large carbon fibre splitter to complete the management of air as it is worked across, through and beneath the sleek lines of the 650S GT3. 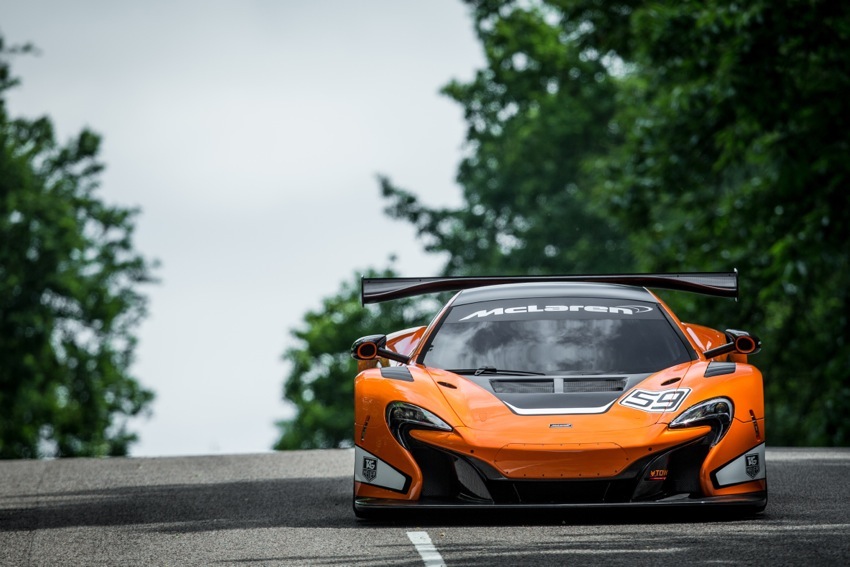 The road-going version has been designed and developed to provide ‘the ultimate in driver engagement on the road’, and the 650S GT3 uses this same approach. Revised suspension geometry, wider track and updates to the overall setup provide enhanced levels of drivability, optimising engagement for the wide range of drivers competing in GT racing. In addition, the updates have been made with added emphasis on endurance racing, pulling from the learnings over the past few years, and responding to feedback from the customer teams. 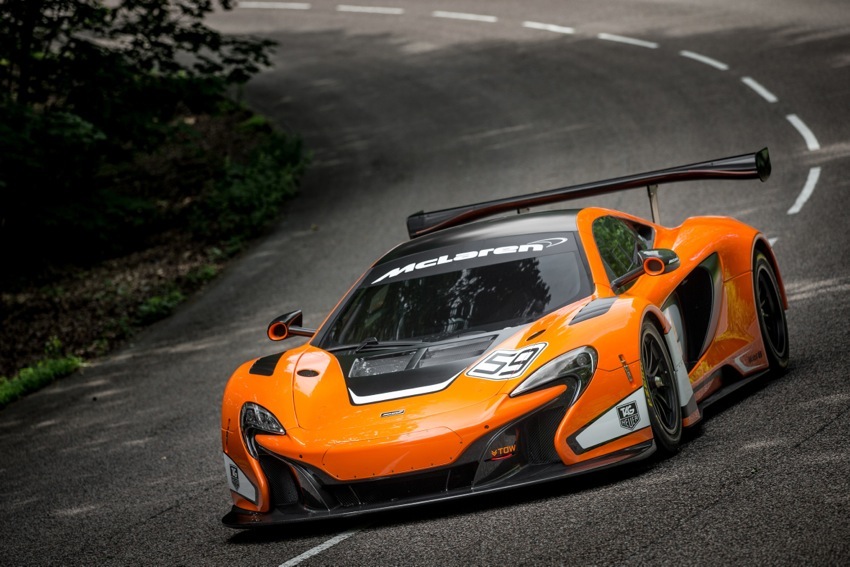 Reduced cost of ownership has been a priority during the design and development of the 650S GT3, and this has been achieved through extended component life, including increased engine and gearbox rebuild intervals, together with re-designed components and systems to reduce parts costs. Body panel design and fit have also been optimised which will not only minimise pit lane repair times but also aids weight distribution through the use of lighter components. 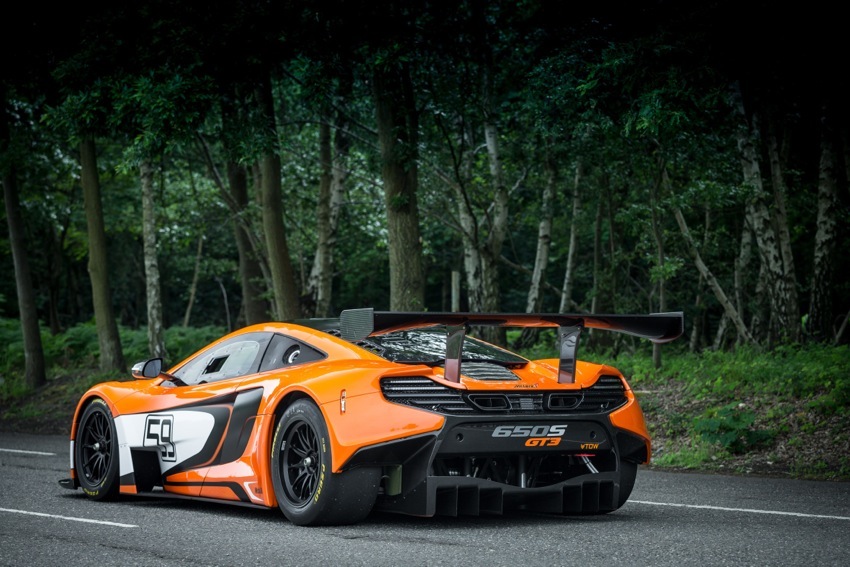 Increased levels of safety and refinement for the driver

Inside the cockpit, the 650S GT3 provides improved levels safety for the driver. Protection offered by the carbon fibre MonoCell chassis is further enhanced with the addition of an FIA-approved rollcage. Redesigned and lighter than that of the 12C GT3, the 650S GT3 rollcage provides a greater degree of driver comfort, with increased leg and headroom. 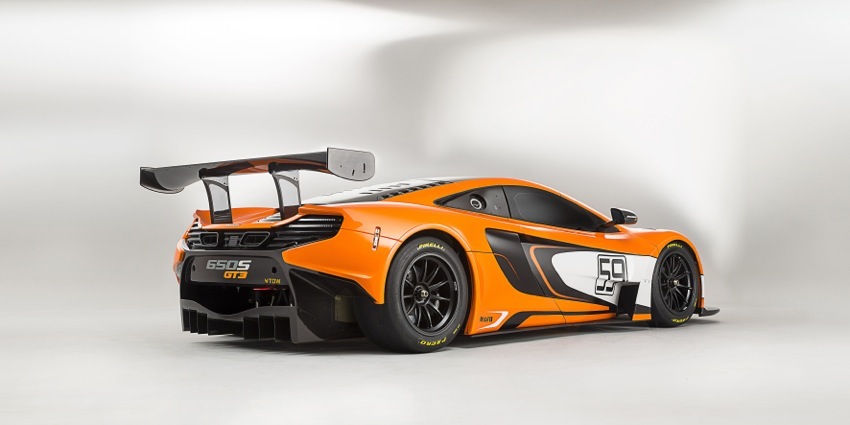 Another key area that has been optimised is the level of refinement, underlining the focus on endurance and driver engagement. As with its predecessor, the 650S GT3 is fitted with a bespoke motorsport digital dash display which sits behind the unique 650S GT3 steering wheel, inspired by the wheel design seen in the McLaren Mercedes Formula 1™ car. New to the 650S GT3 is a fully FIA-approved McLaren GT-developed race seat, fitted with a six-point race harness as standard. This seat offers increased levels of support and driver comfort through the use of bespoke moulded seat inserts. 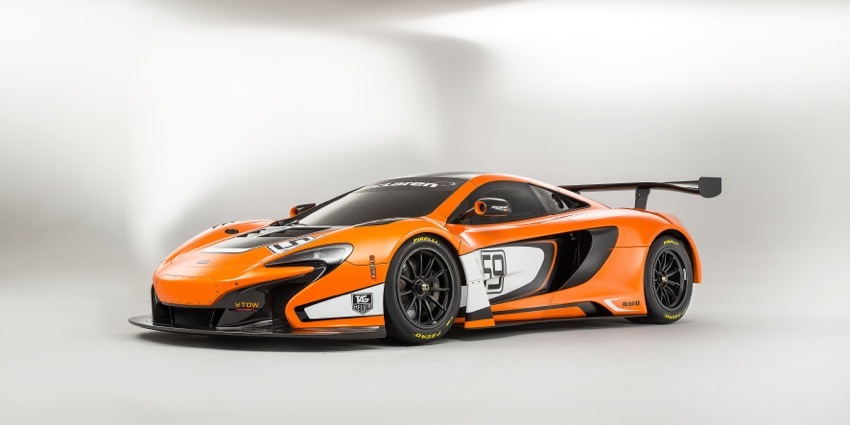 The layout within the cockpit has been revised to make it even more driver-focused than previously. The seat is directly mounted to the chassis, and the steering wheel and all-new motorsport pedalbox are then adjustable to bring them closer to the driver. The centre console is also developed from the latest 12C GT3 interior, reducing complexity, and features a membrane-type switch panel for ease of use. In addition to this, improvements have been made to further optimise ventilation and driver cooling. 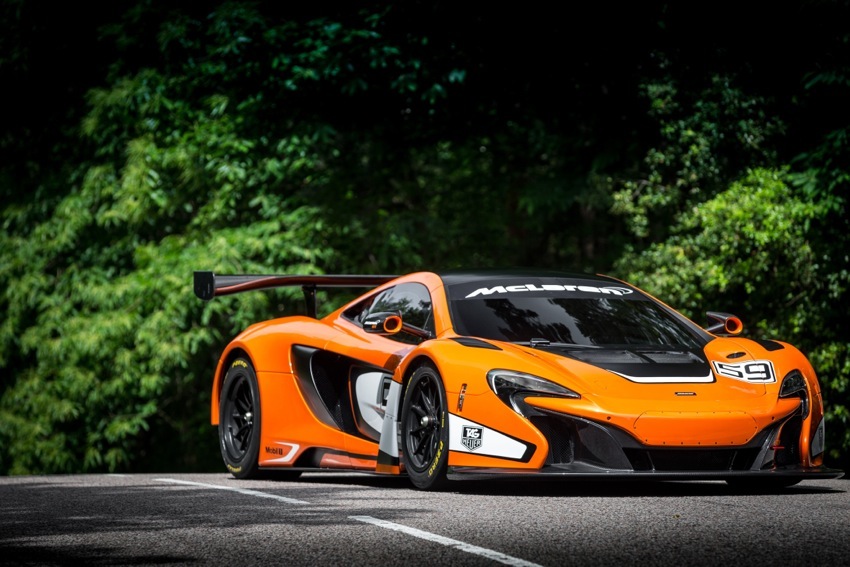 The 650S GT3 is equipped with the latest generation of the award-winning, 3.8-litre McLaren V8 twin turbo ‘M838T’ engine. Race-prepared and including a McLaren-developed ECU offering increased functionality to incorporate turbo boost and transmission shift control, the engine is coupled to an all-new six-speed sequential motorsport transmission. The 650S GT3 produces around 500PS – the same power as the 12C GT3, which is controlled by the FIA’s Balance of Performance (BOP) regulations. Cooling is improved through larger 650S intakes within the front bumper and re-profiled side intakes. In addition to this, the gearbox oil cooler has been relocated, now incorporated into the larger side intakes, giving the rear of the car a cleaner, more aerodynamic flow. 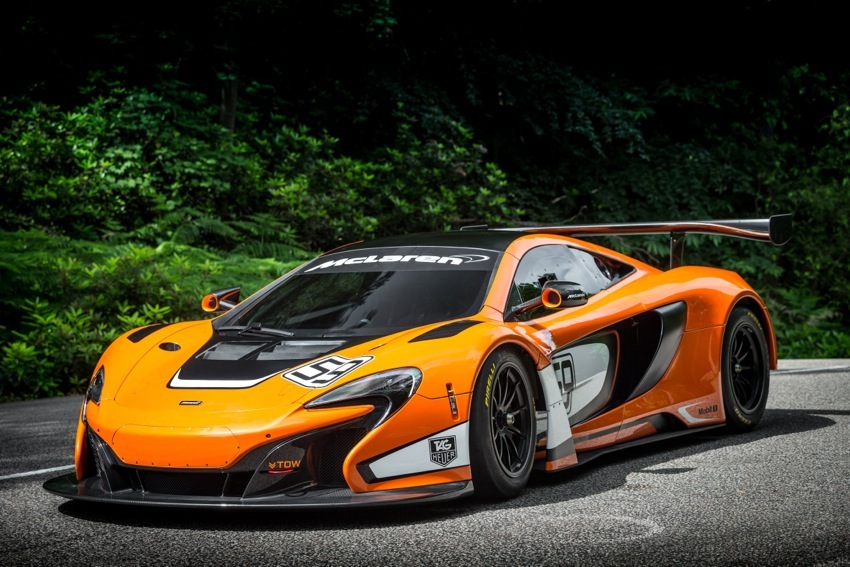 The 650S GT3 uses an all-new race-tuned suspension system with a 52mm wider track than the 12C GT3. The front suspension also allows the fitment of the latest generation larger diameter racing tyres . In conjunction with the optimised aerodynamic package, this provides increased levels of front-end grip and steering feel on turn-in. Newly designed forged aluminium wheels (front – 12.5” x 18”, rear – 13” x 18”) are held in place with a single wheel retaining nut on motorsport axles, while a revised hub bearing assembly and extended-life suspension components are another example of a simplified service item, and reduced maintenance costs. 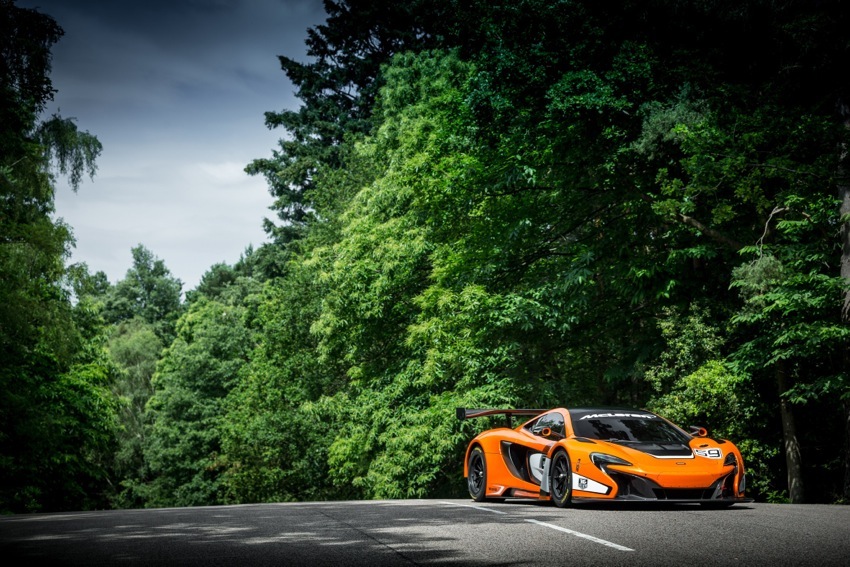 Behind the new design eight-spoke wheels, and bringing the power, aerodynamics and downforce under control is a newly-developed braking system with monoblock six-piston callipers on the front, and four-piston on the rear, with ventilated discs (380 x 35mm front / 355 x 32mm rear).

The 650S GT3 development programme has pulled significant data from the findings and lessons learned from the 12C GT3 programme. Testing of the 650S GT3 will continue throughout the summer with customer car production commencing in the autumn. Pricing for the 650S GT3 has been confirmed – £330,000 ex works, plus tax. 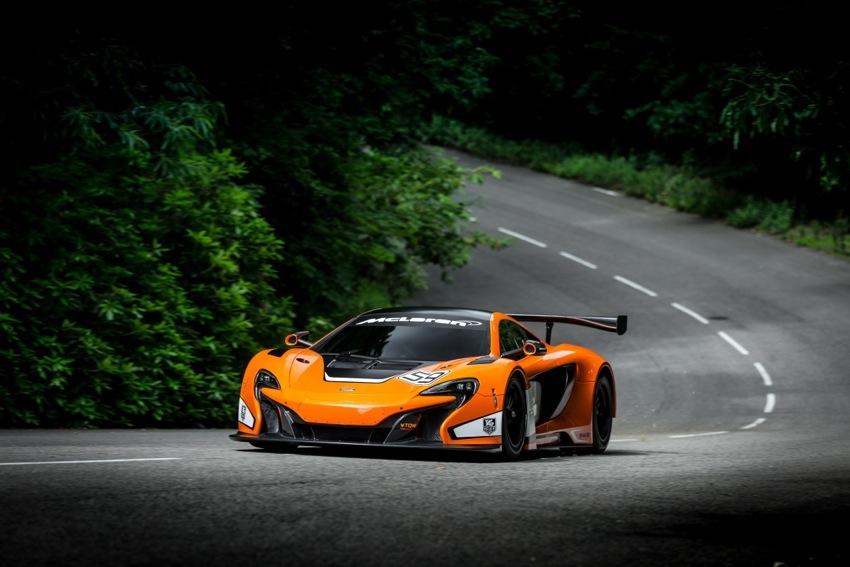 Existing owners of the 12C GT3 are also able to benefit from the updates and enhancements offered by the 650S GT3, due to the use of the shared chassis structure and award winning engine. This upgrade package further extends the life of existing 12C GT3 cars allowing them to continue racing competitively through a second GT racing life cycle. For many McLaren GT3 owners this allows them to race their existing car for an average of six seasons. 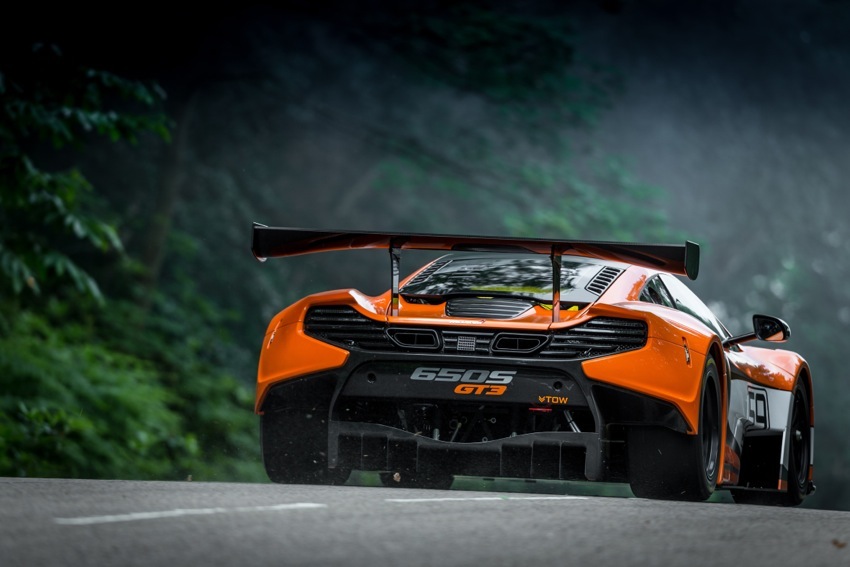 Around 15 examples of the 650S GT3 are planned to be produced and delivered for the start of the 2015 season. With the optional upgrade package for 12C GT3, this could see an additional 15 cars running the new design from next season.

The car unveiled carries the Goodwood Festival of Speed theme of ‘addicted to winning’, with its livery including the number 59. The number was carried by the now legendary McLaren F1 GTR chassis #01R at the 24 Hours of Le Mans in 1995, and claimed victory in the gruelling test of endurance on its debut – a feat that had never been achieved previously, and has not been repeated since. Deliveries of the 650S GT3 will commence from late 2014, and the competitive debut with customer teams in GT3-homologated series will start in 2015, 20 years on from the famous race victory. 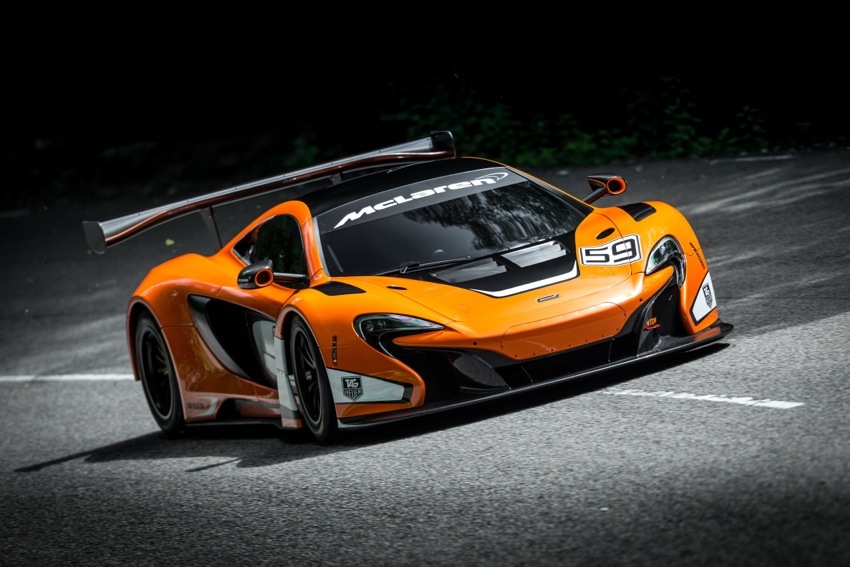