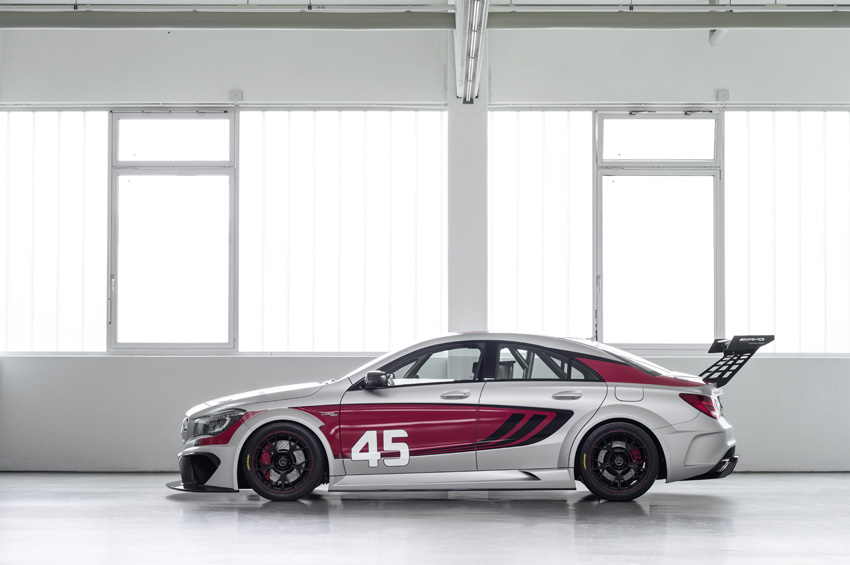 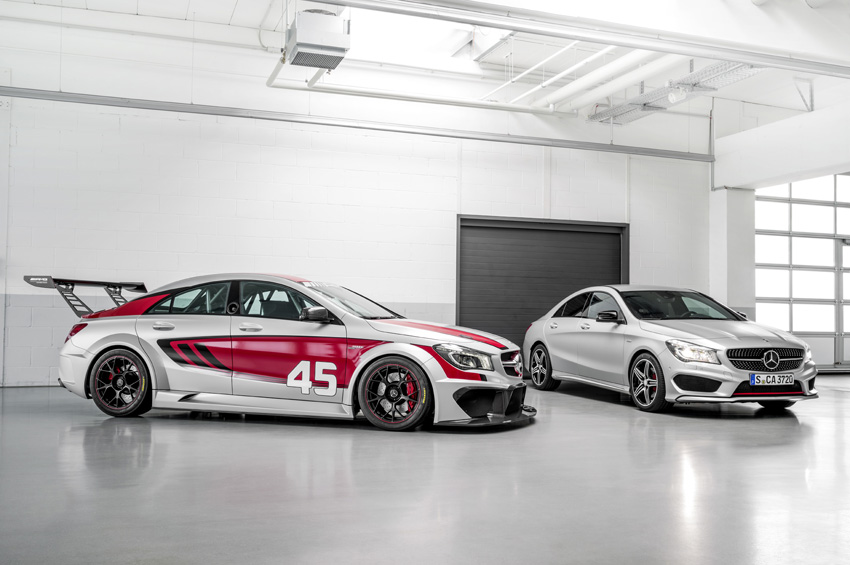 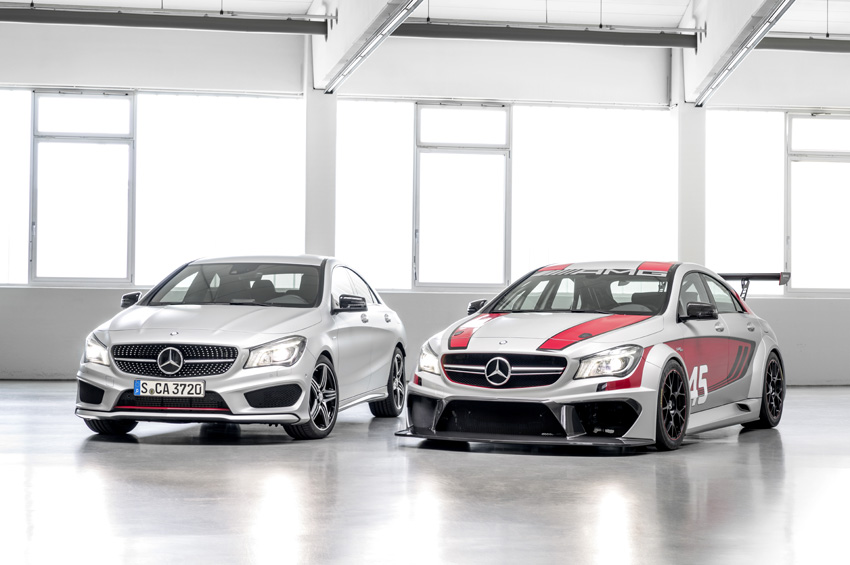 The standard version of the CLA 45 AMG, which has been available since June 2013, has the perfect genes for a competitive customer sports racing car: As the world’s most powerful four-cylinder engine in series production, the turbocharged AMG 2.0-litre unit generates 265 kW (360 hp) and maximum torque of 450 newton metres. As on the standard model, power on the racing version is transferred by the AMG SPEEDSHIFT DCT 7-speed sports transmission. Given sufficient demand, the near-series CLA 45 AMG Racing Series could enter various international race series such as national brand-specific trophies or the German VLN series (Veranstaltergemeinschaft Langstreckenmeisterschaft Nürburgring – Organiser’s association for Nürburgring long-distance championships). The technical specifications will vary according to the race rules and race series. The engine output and power transmission are variable, with permanent all-wheel drive or purely front-wheel drive possible as in the standard version. 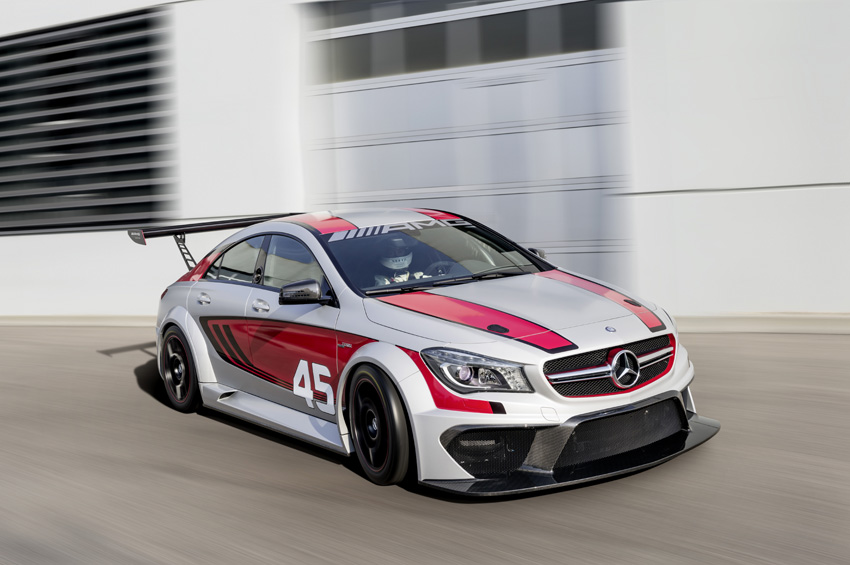 Ola Källenius, Chairman of the Board of Management of Mercedes-AMG GmbH: “With the CLA 45 AMG Racing Series we are providing a preview of another exciting customer sports racing car from Mercedes-AMG. The great success of our involvement with the SLS AMG GT3, which is now used by customer teams on five continents, means that we are very confident: in the popular four-cylinder segment too, we want to offer interested customer teams a competitive, near-series racing car with a high level of safety.” 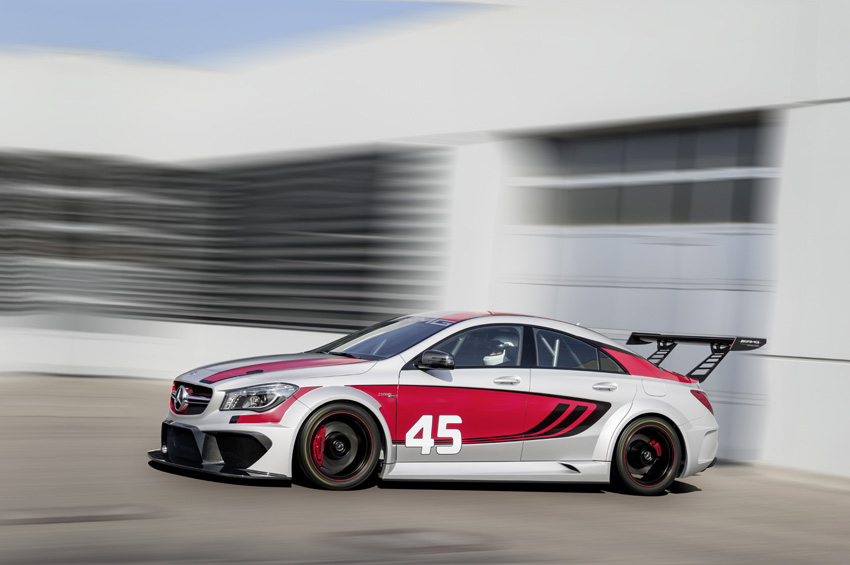 Uli Fritz, Head of AMG Customer Sport: “The large demand for a customer sports racing car for the extremely popular race series with turbocharged 2.0-litre cars encouraged us to present a showcar CLA 45 AMG Racing Series. Our involvement in customer sports with the SLS AMG GT3, which was able to win the “grand slam” of classic GT3 long-distance races, continues to spawn success in its fourth year.” 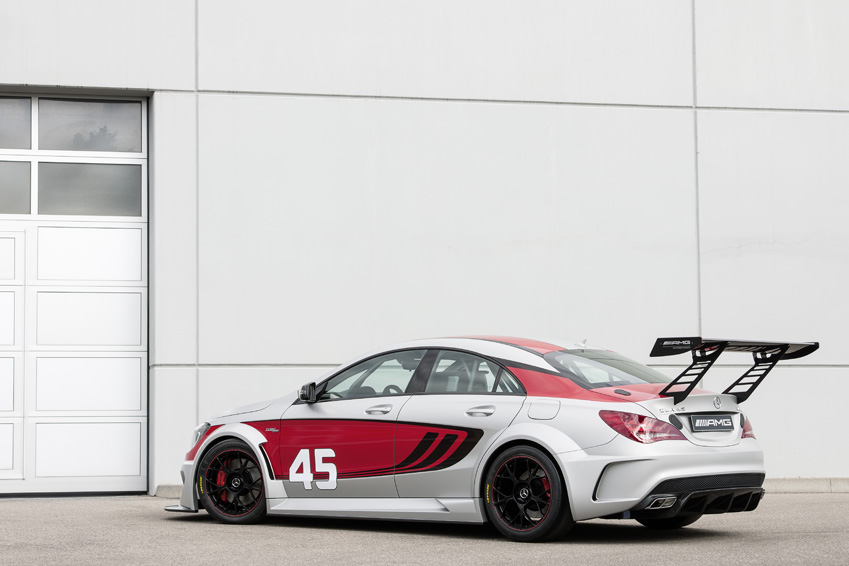 Spectacular racing car design
Typical racing car features made completely from carbon-fibre (CFRP) make the extravagant design of the standard CLA 45 AMG even more spectacular: they include a new front and rear apron, flared wings and side sill panels. In addition, treadless racing tyres ensure an impressive width. Thanks to carbon-fibre rear wings and large cooling apertures for engine and brake cooling, the CLA 45 AMG Racing Series makes an imposing impression even when stationary. For use on the racetrack, the already good aerodynamic attributes of the four-door high-performance coupé are further optimised by the newly developed carbon-fibre components: the front apron with a front splitter ensures additional downforce, as do the rear diffuser with three fins and the adjustable rear aerofoil. The air intake in the side sill panels ahead of the rear wheels ensures effective cooling of the rear brakes. Wheel arch vents in the wings, which are flared by over six centimetres on each side, increase the downforce at the front and rear axles. In true racing style, the bonnet and boot lid are fitted with quick-release catches. In short: the motor racing DNA of AMG, the performance brand within Mercedes-Benz, is immediately recognisable in the CLA 45 AMG Racing Series. 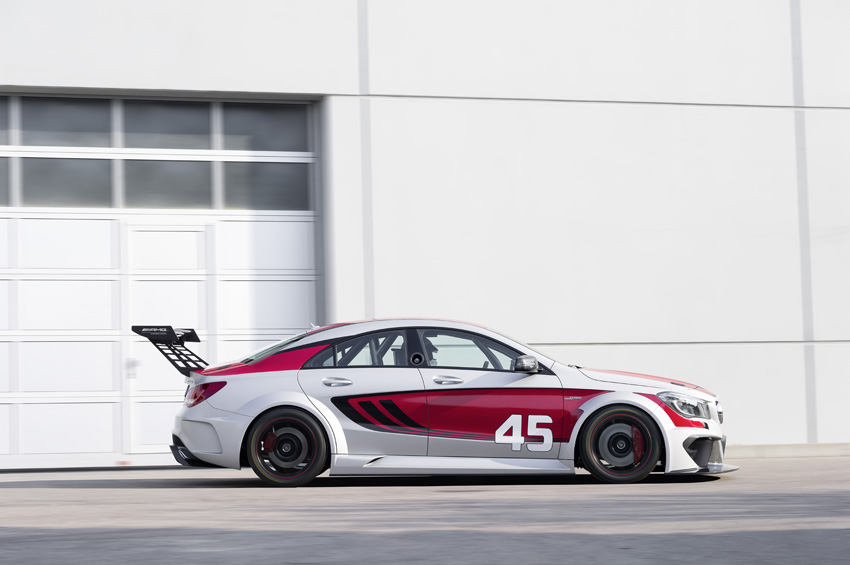 High level of safety in the interior
A functional racing car atmosphere predominates in the interior: the roll-over cage is made of high-strength steel. An exemplary level of safety is ensured by the carbon-fibre P 1300 GT racing bucket seat from Recaro, prepared for the HANS system (Head and NeckSupport), and the integrated fire extinguishing system. In the cockpit the AMG instrument cluster keeps the driver informed about the road speed, engine speed and the operating temperatures of the engine and transmission. The racing steering wheel with shift paddles for gearshifts allows perfect vehicle control. The centre console houses additional controls such as the central switch for the onboard electronics and switches for the hazard warning system and fire extinguishing system. 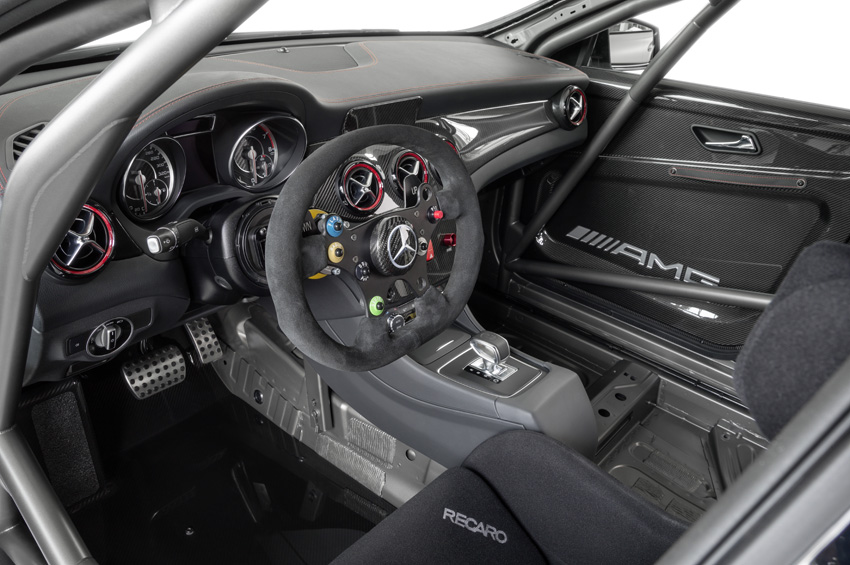 Special motorsports suspension allows an individual, track-specific setup
The special racing suspension has a wider track at the front and rear, and allows numerous adjustments for an individual racetrack setup. The suspension level, spring rate and damper characteristics are adjustable, as are the track and camber at the front and rear axles. The AMG high-performance braking system with ventilated discs all-round is equipped with an anti-lock system. The AMG light-alloy wheels in a cross-spoke design are shod with racing tyres in size 265-660-18 from technical development partner Dunlop, and to reduce unsprung masses the AMG light-alloy wheels feature a particularly lightweight forged construction. The electro-mechanical AMG speed-sensitive sports steering assists with agile handling. Fast wheel-changes during pit-stops are made possible by the pneumatic lifting system integrated into the underbody. 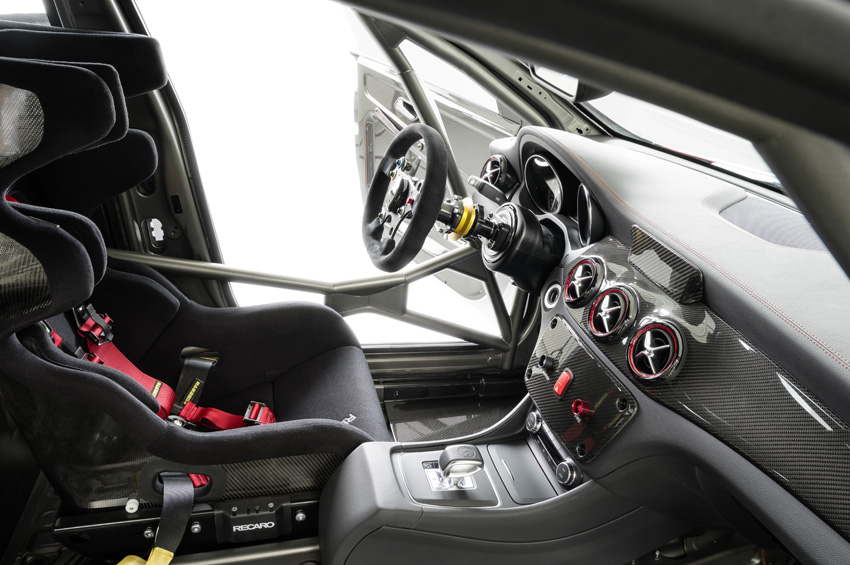 Like the SLS AMG GT3 before it, the CLA 45 AMG Racing Series was developed by Mercedes-AMG in close cooperation with HWA AG. HWA is responsible for the development and race appearances of the AMG-Mercedes DTM cars on behalf of and in close collaboration with Mercedes-Benz Motorsports. Professional racing drivers including the AMG brand ambassador Bernd Schneider share the cockpit during the course of the test and development programme. The HWA team, which originated within AMG, is one of the most successful teams in international motorsports: Ten driver’s titles in the DTM and ITC, as well as two overall victories in the FIA GT Championship, are compelling evidence. No other brand has won as many DTM races and DTM titles as cars from AMG-Mercedes.