Words | Photos by: our friends at Quattroworld — Mike Juergens 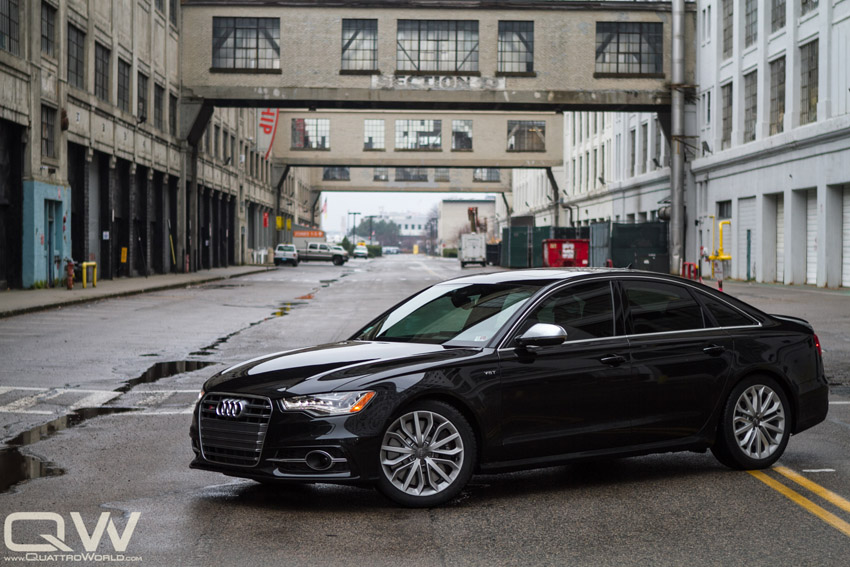 Stepping into Audi’s new S6 cabin feels a bit like entering the cockpit of Germany’s newest fighter jet. The seats are of the finest German leather and they immediately engulf the driver. The new diamond pattern stitching stands out with its high quality white contrasting thread against the black leather. The leather wrapped steering wheel is the prefect size and feels great in your hands as you take the controls.

There’s a lot of technology in this car that is new to Audi. Pressing the start button activates the heads-up-display which is patiently displaying 0 MPH, the new 4.0-liter twin-turbo V8 comes to life, the needles sweep and the navigation screen slides out of the dashboard. Tapping the car button on the Audi MMI controls allows you to turn the ultra precise dial to dynamic mode. The air suspension drops the car slightly and stiffens up the ride. Pulling the shifter into drive and one more click down into S transforms the car into the ultimate autobahn machine. 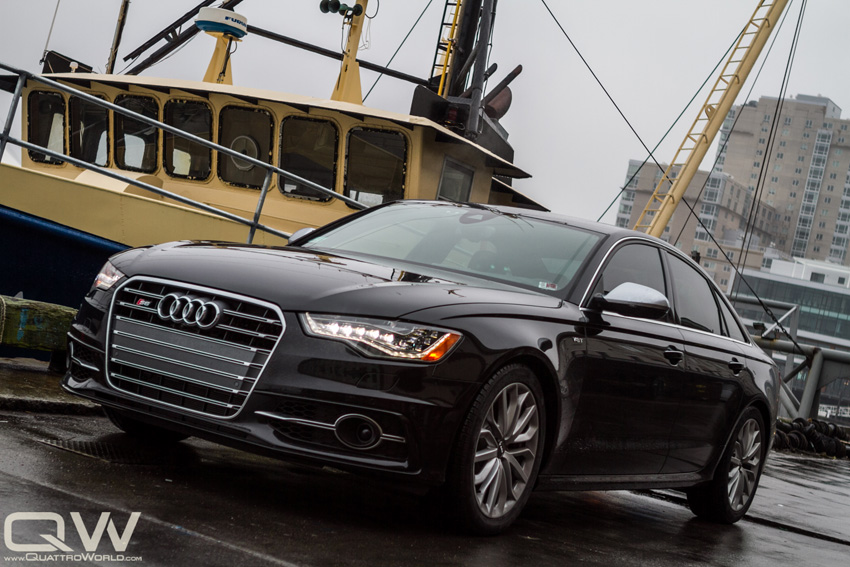 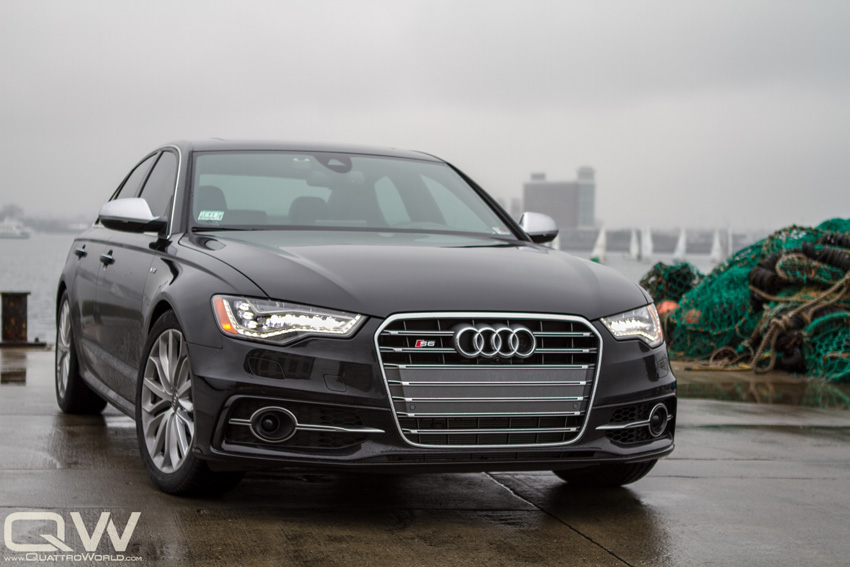 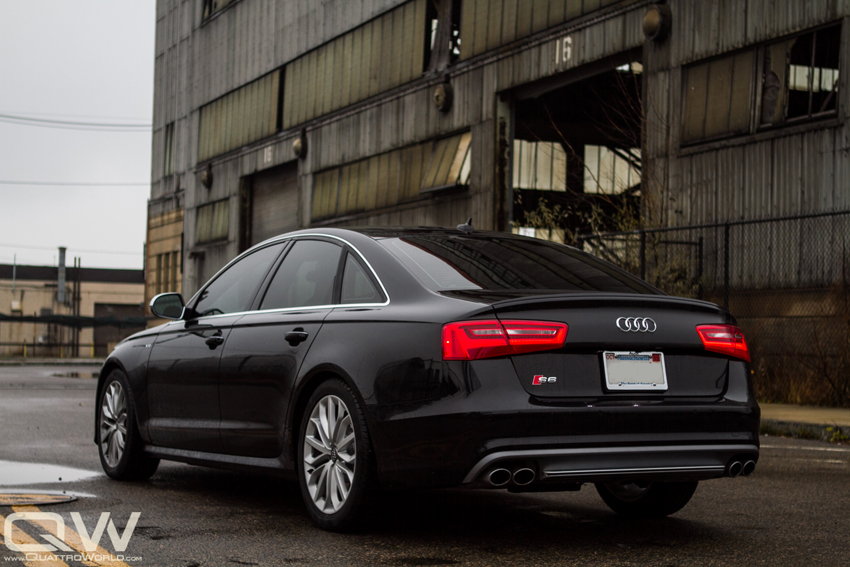 With just a slight depress of the throttle the S6 takeoffs. There’s nothing subtle about the acceleration and only slight inputs are required. There’s no complaining for the engine, transmission or steering. They just do as they are told. Merging onto the highway was very smooth and uneventful. There was no wild kick down from the 7-Speed S Tronic transmission. Just an incredible purr from the engine and we were at highway speed. Just a slight input again and we were able to speed up and switch lanes. The lack of effort involved with driving the car is refreshing. The power delivery is so smooth and consistent.

The beauty of the drive selects system in the S6, like the other Audi’s equipped with this feature, is it allows the vehicle to move from fighter jet to corporate jet with the twist of the MMI knob. The suspension, throttle, exhaust note, and transmission are all adjustable. When traversing city stop-and-go traffic or cruising on the highway, the dynamic throttle response and all 420 HP isn’t required. But they can be dialed in instantly. 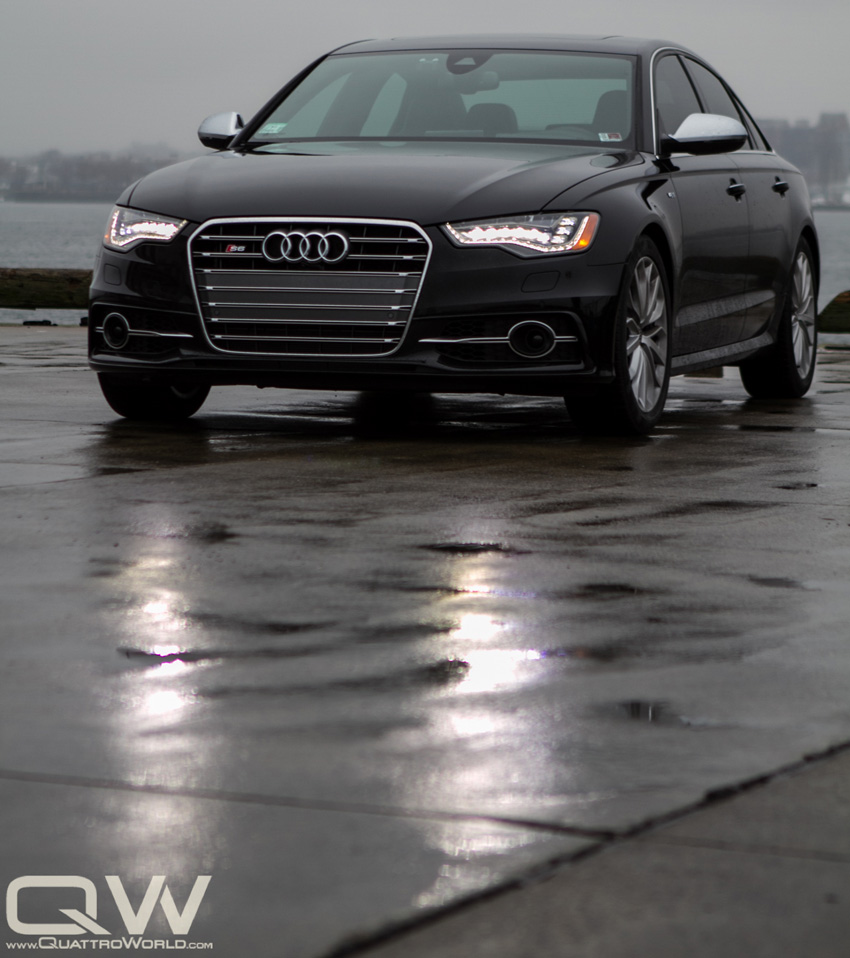 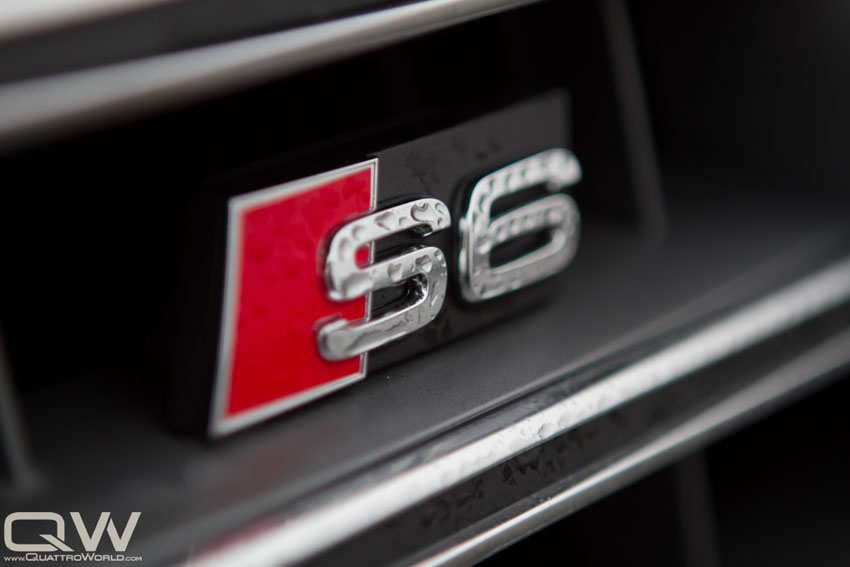 Cruising at highway speed, the V8 is capable of shutting down 4 of the 8 cylinders for maximum efficiency. Audi claims the car is able to achieve 27MPG on the highway and we noticed a slightly higher return. Audi has also put a great deal of technology into their cylinder deactivation system. In other competitors, the cylinder shutdown is often very noticeable. Audi has gone to great lengths to make sure this isn’t the case with their new engine. The engine mounts are active which means they vibrate at the same frequency that the engines vibrates. This stops the vibrations from transferring into the body of the car. There are also microphones strategically placed around the cabin to detect the engine noise and produce sound in a similar range to cancel out the engine noise. The cabin is incredibly quiet and allows you to have a conversation  at normal volume with all occupants of the car. Also,it allows you to fully appreciate the 1,300-watt Bang & Olufsen advanced sound system.

Audi has one again designed a car that will fit any lifestyle. Gone is the monstrous 5.2-Litre V10 from the previous S6, which was a bit unwieldy to most who drove it. In its a place is the latest high-tech engine from Ingolstadt. The S6 continues to raise the bar in an already busy segment.  There’s nothing about the new S6 that isn’t amazing. It starts at $71,900, and the car we drove just over $88,170, which is about $15,375 in options. Those looking to pick up an S6 without all the options will not be disappointed. The S6 certainly stands on its own without them. 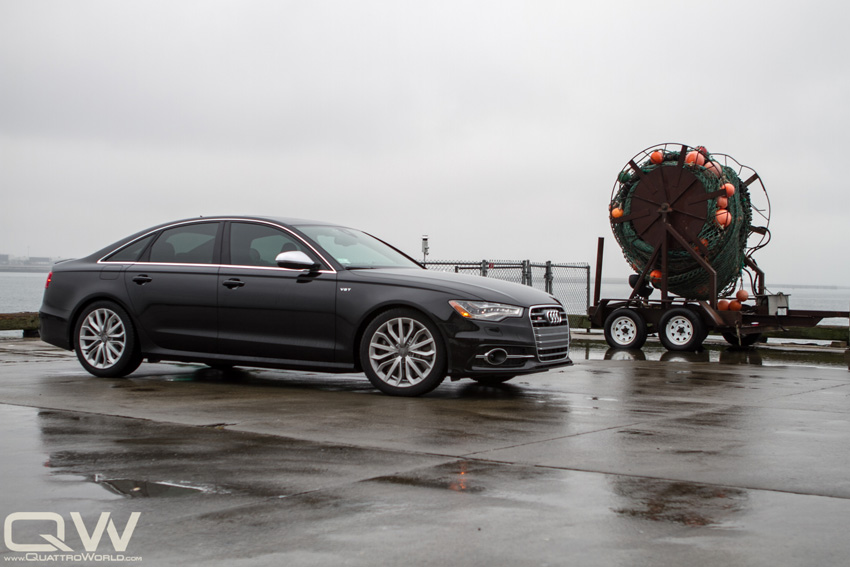 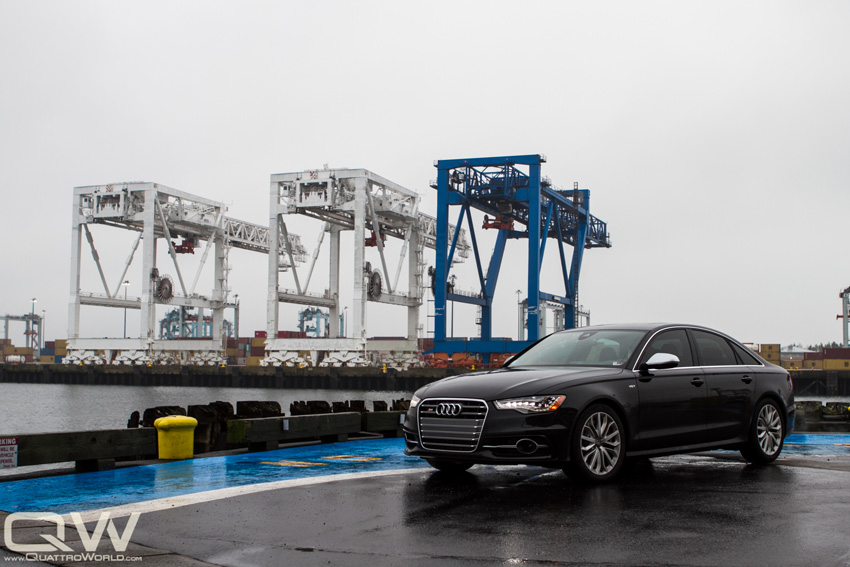 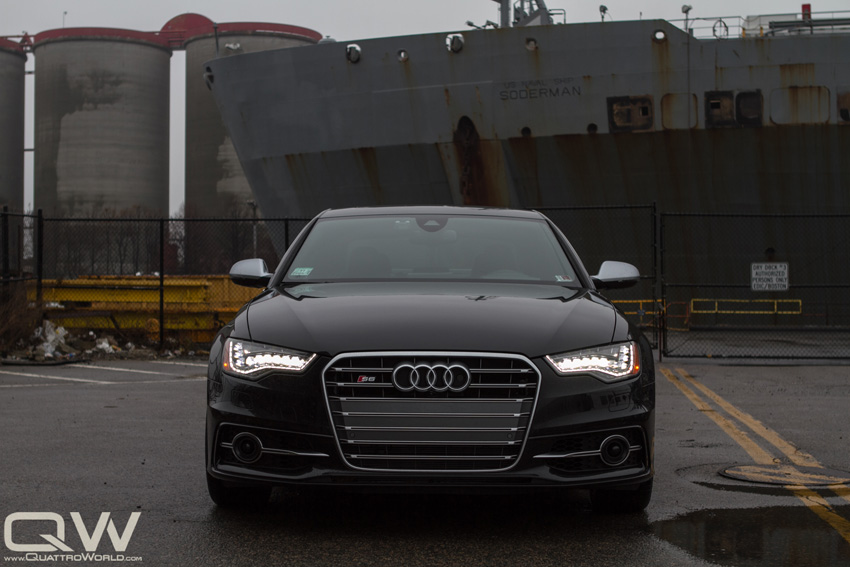 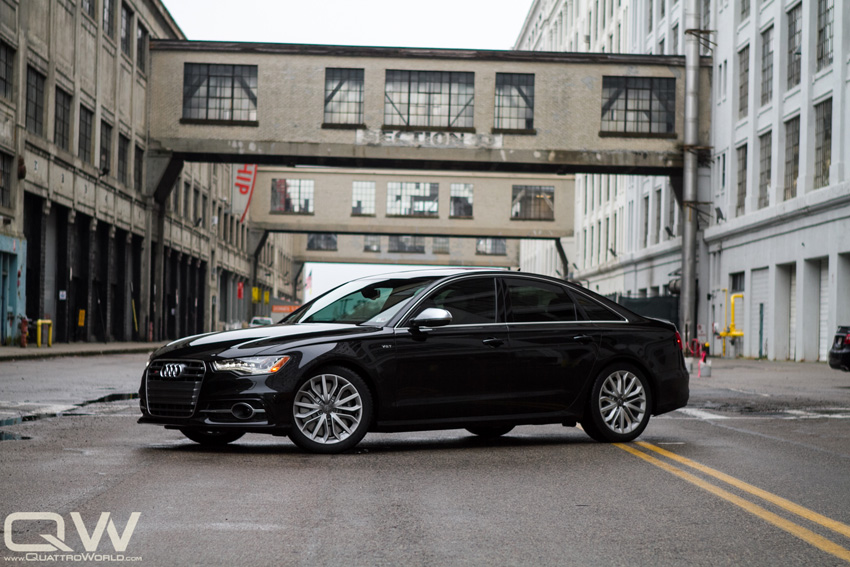 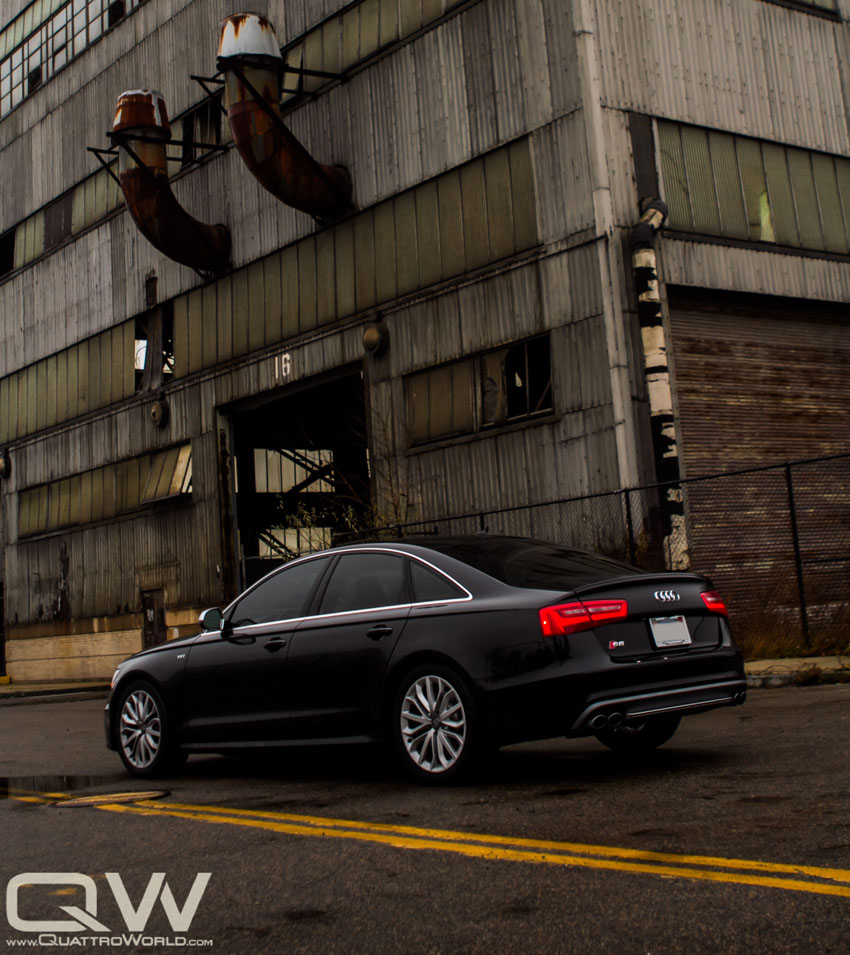