*posted in cooperation with Quattroworld*

The Audi R8 is the perfect everyday supercar; it’s precise, composed, focused. It is even Iron Man’s ride of choice. The steering input provides instant feedback to the driver. The 30:70 split quattro all-wheel drive system allows the tail to kick out when pushed but also helps the driver remain in full control. The throttle is snappy; it takes the slightest inputs and reacts instantly. The massive carbon ceramic brakes stop the R8 with the power of a super hero. The magnetic suspension is firm and helps keep the car well planted. 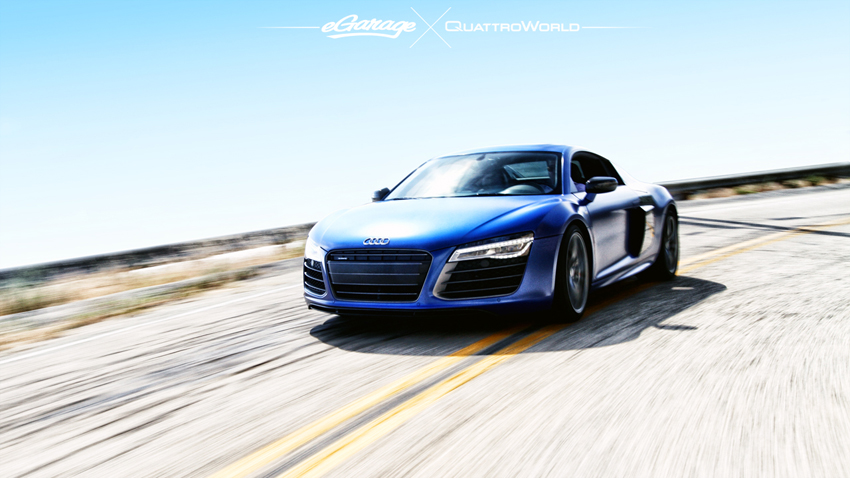 Oh, and the engines are the stuff of legends. The V10 is the same exact power plant that comes in the R8 LMS racecars. The monstrous 550-hp 5.2-liter V10 beast is engineered to produce the greatest symphony ever written–while positioned just a few inches from your head. The 4.2-liter V8 has been increased to 430-hp and paired with the 6-Speed manual makes it one of the most affordable supercars available. 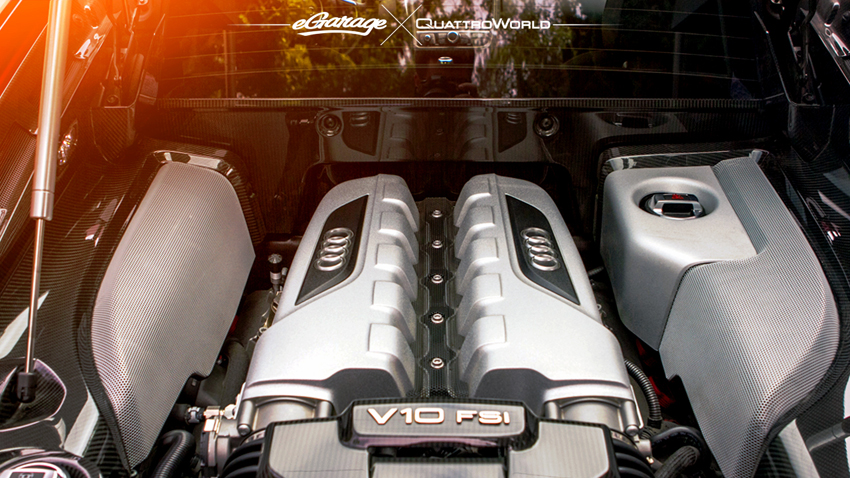 Audi invited us to Malibu, California to spend the day driving and putting the all-new 7-speed S Tronic through its paces. Stepping out of the back seat of a brand new Audi A8L TDI and onto the Stone Manor driveway I was greeted by a line up of 7 2014 R8s. 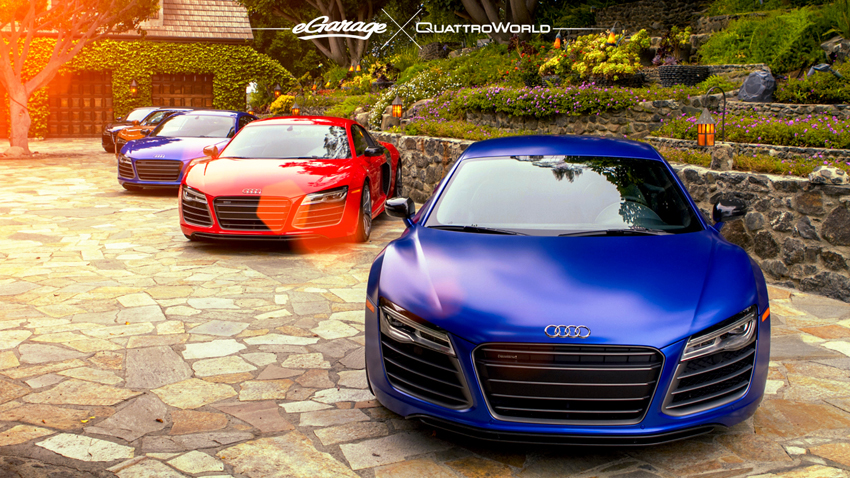 Audi isn’t new to dual-clutch gearboxes. It has been using them for many years with great success across their whole range. This is the first time one is feeding the quattro all-wheel drive system of the R8. The new 7-Speed S-Tronic, which swaps gears faster than your brain can process the changes, is incredible. Driving normally the gear changes are smooth and the only indication of the switch is the engine RPMs. The S-Tronic is very happy driving around town at normal speeds. 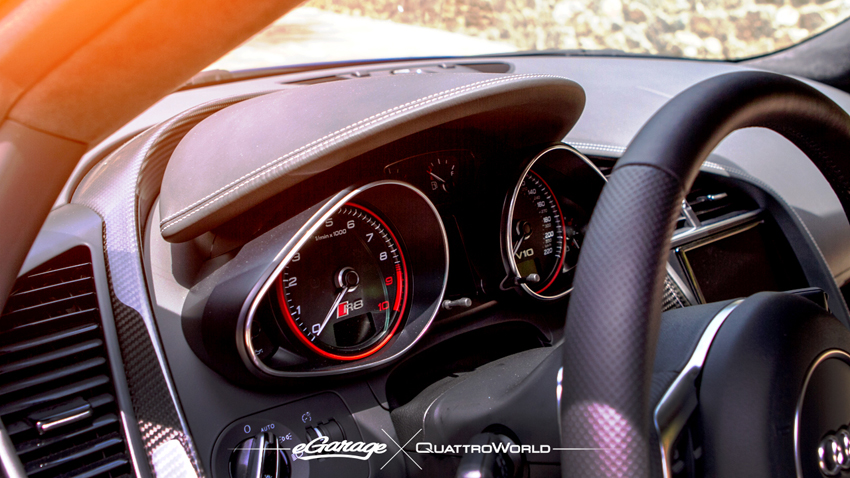 Unlike the past R Tronic gearbox, which the S Tronic has replaced, is a transmission that’s easy to live with everyday. The R Tronic, which was best when driven in manual mode, wasn’t very smooth when drive in Auto. When in M mode it was a great gearbox when driven hard. The new S-Tronic has rounded out the car to make it a truly everyday super car. 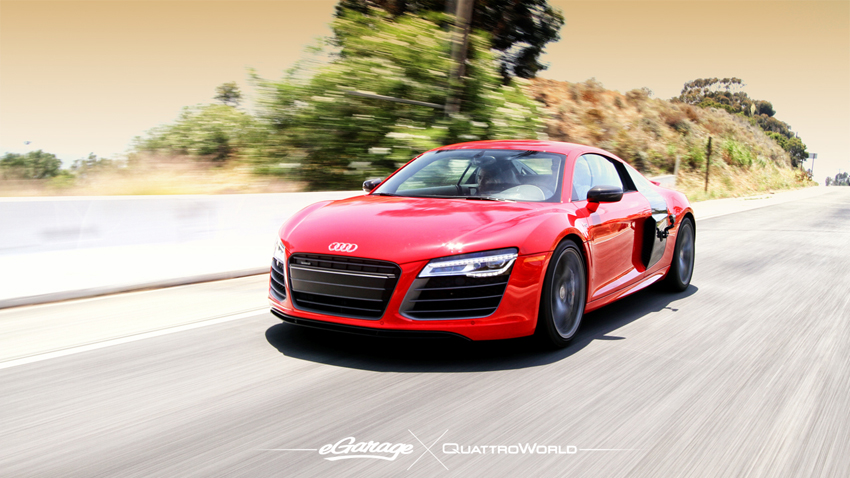 My first car of the day was a Samoa Orange R8 V8 Spyder. I couldn’t think of a better way to start the day. I got in, turned the key and the V8 roared to life. The second thing I did was to open the roof.  Which, would later lead to the optional sunburn. 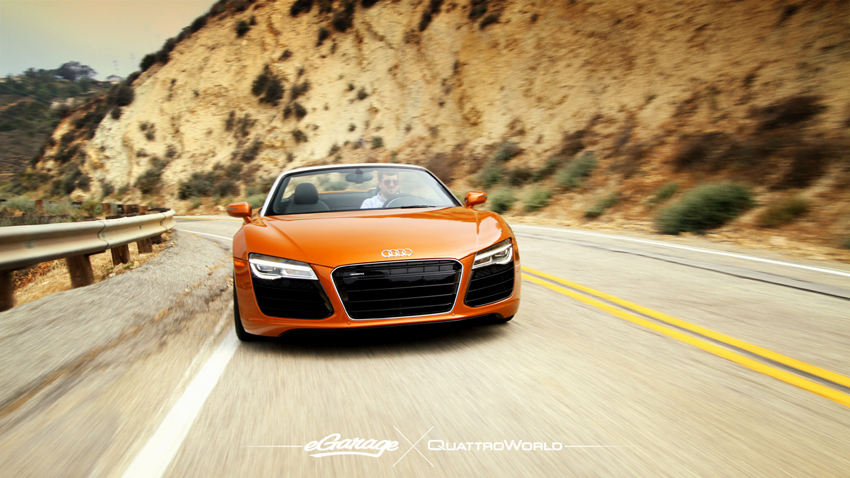 Many Spyders variants have a tendency to weigh more than their coupé variants. Audi has put a lot of effort into make sure this isn’t an issue. Starting with the all aluminum space frame, which is designed from the start to accommodate the lack of a fixed roof. For 2014, Audi made some additional changes to the Spyder: the weight of the top has been reduced to just over 92 pounds thanks to the use of carbon fiber-reinforced polymer (CFRP), aluminum and magnesium. 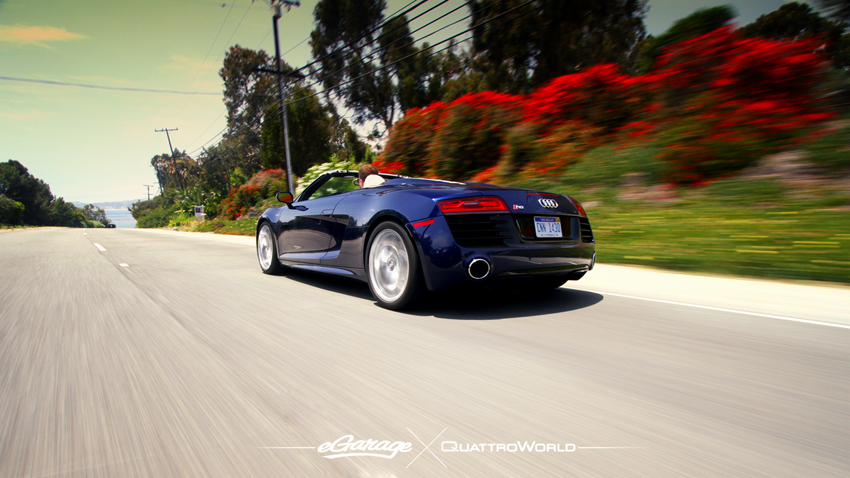 I moved the gear selector to A1 and followed a Sepang Matte Blue V10 Plus out of the driveway and into the Malibu Canyons. This would my first test of the new S-Tronic gearbox. The first thing I noticed was just how smooth the gear changes were driving in automatic and with the sport button off. There was no fuss, extra noise, and abrupt shifts, just a nice smooth drive. Next, I activated the sport button and the car woke up. The exhaust note became more apparent, the gears were being held longer, the shifts were quicker and it would automatically rev-match downshift as I was slowing down. Clicking the gear selector to the left switched over to M1. Pressing the throttle the car quickly climbs towards the red line before I pulled the upshift paddle for an incredible fast shift. With the combination of the Sport button and Manual mode the Spyder was quickly transformed into a topless rocket ship. 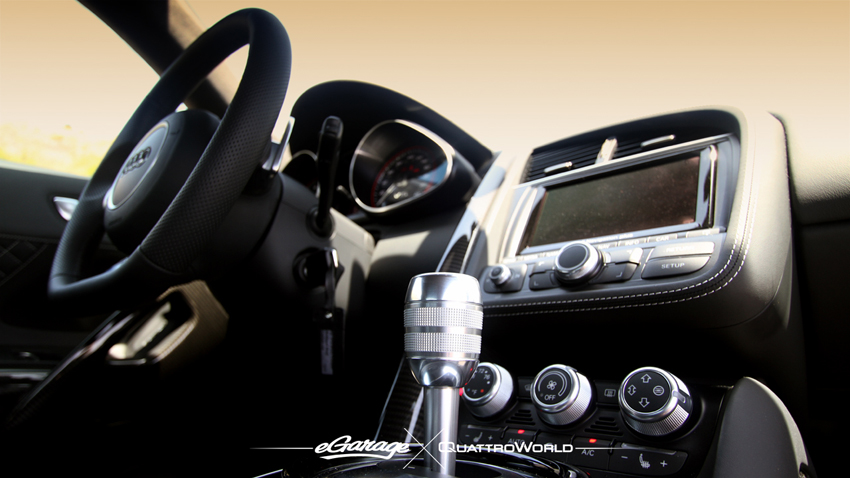 The latest version of the R8, the R8 V10 plus, the next top model and the most advanced R8 road car to date. Audi engineers have managed to reduce the weight by 110 lbs. when compared to the R8 V10 Coupé. A majority of the R8 V10 pluses weight savings comes from Audi’s use of carbon fiber-reinforced polymer (CFRP). Many of the exterior pieces including the sideblades, side mirror housings, front spoiler and the rear diffuser are all constructed using CFRP. The weight savings and extra power was quickly apparent especially when driving it back-to-back with the R8 V10 Coupé. 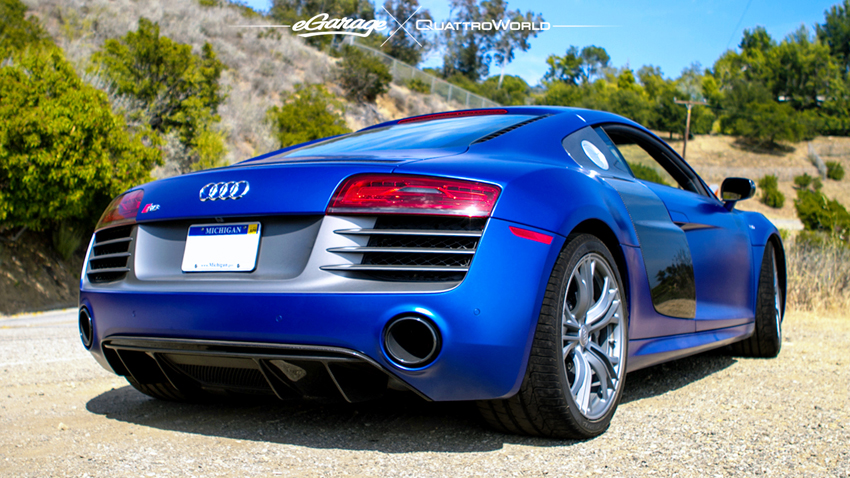 Driving the Plus through the Canyon was pure bliss. With the sport button engaged, manual mode selected the car really comes to life. I never once felt as if I had taken the car to the edge as when you push the R8 the edge seems to always keep it’s distance. Some people may fault the car for this reason but I only see it as a positive. A driver shouldn’t have to fear his car to enjoy it and the R8 could be enjoyed from the edge to the grocery store parking lot. The monstrous 5.2-liter V10 in the Plus is also increased by 25-hp over the V10 Coupé brining it to 550-hp. 0-60 arrives in 3.5-seconds which is even faster than the previous R8 GT. The extra power and the new S Tronic gearbox make this possible. 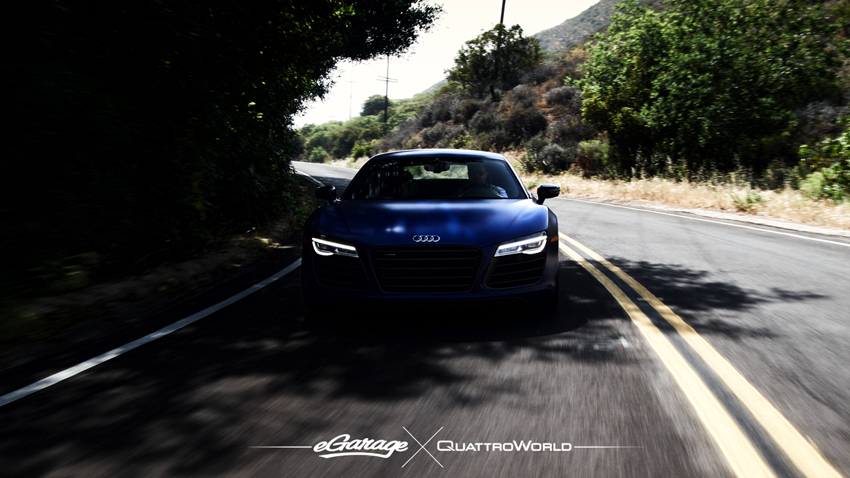 The R8 is a timeless car that everybody can enjoy. It’s able to quickly adapt to any driving condition and situation that you can find yourself in. With the quick press of a button or the sliding of a gear selector you can quick transform the R8 from a track monster to an everyday supercar.

Near the end of my time with the R8s, I pulled over at an overlook to admire the view and to listen to the sounds of the other R8s filling the canyon. The unique sound of the harmonic Audi R8s echoing off of the canyon walls was a perfect time for retrospect. It is one thing to going into this day thinking that it might just be the greatest day that I’ve experienced professionally, it is another thing altogether to look back on the day that just happened and realize that it actually was. 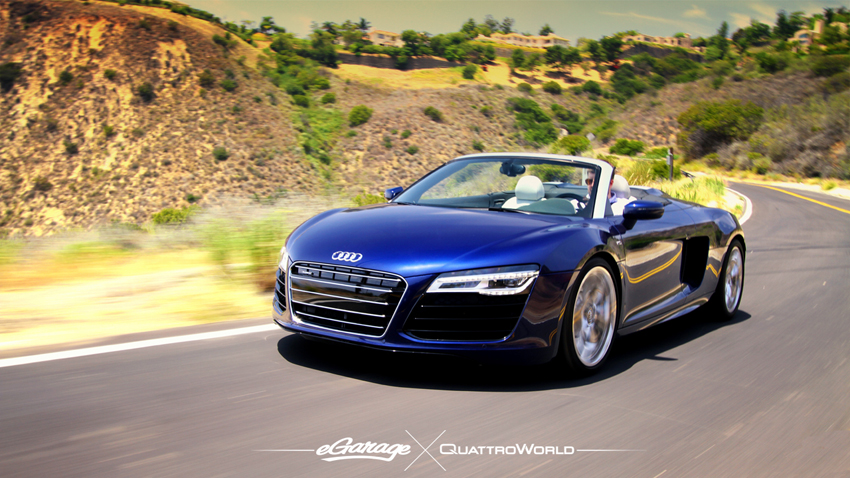 The Audi R8 is truly the everyday supercar. It has the looks, the power, and the engineering. And oh, it has the sound too, that sound, which I won’t ever forget. If you have the means, I highly recommend making everyday like the one I just experienced. 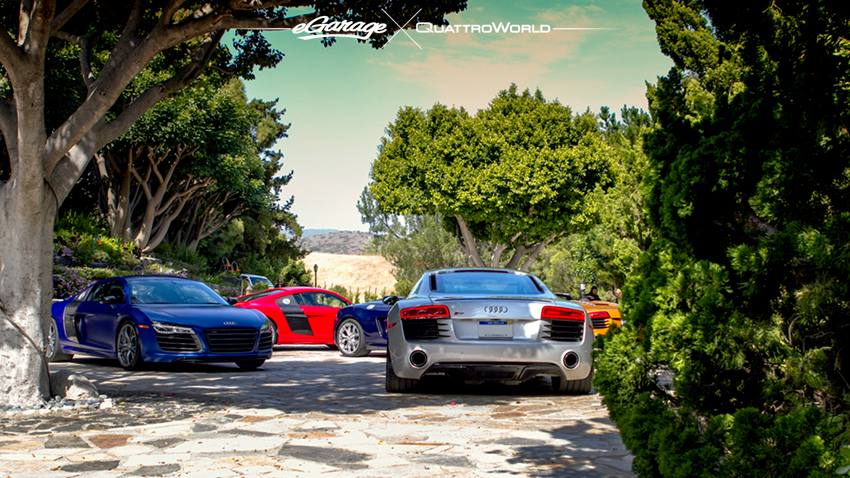