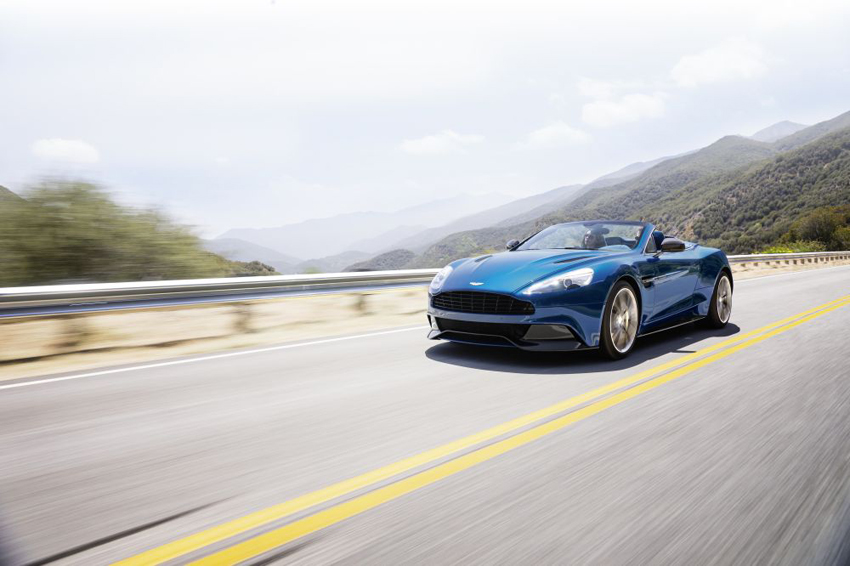 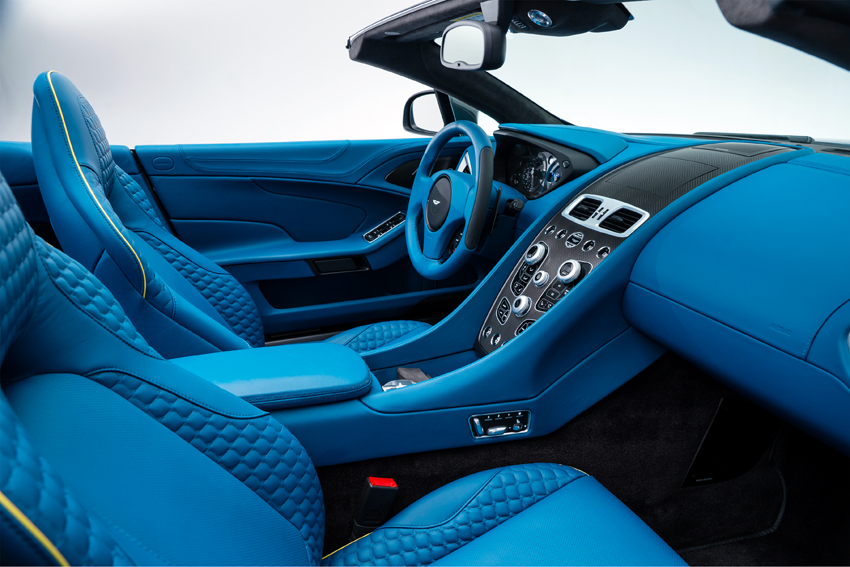 Alongside its coupe sibling, launched to worldwide acclaim last autumn, the Vanquish Volante sits at the pinnacle of the luxury British car maker’s sports car line-up. 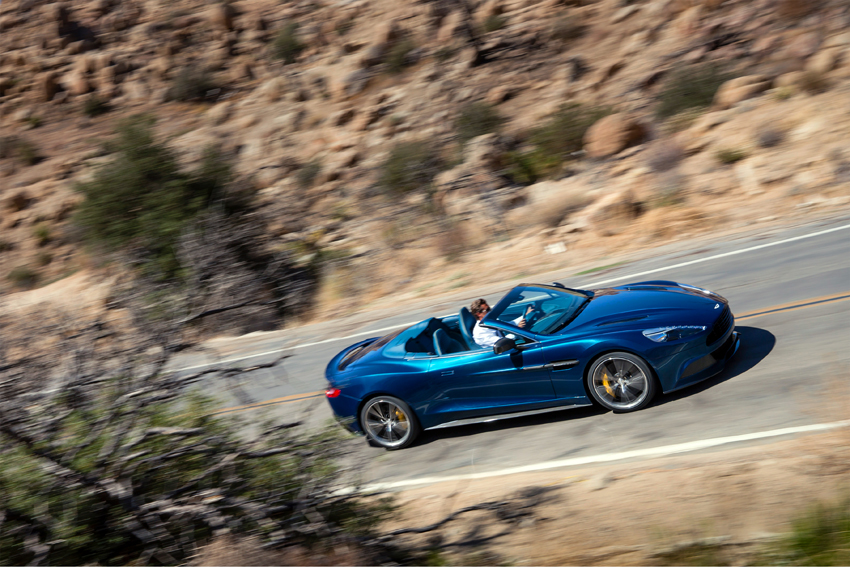 Benefitting from all of the technical, engineering and design advances present in the Vanquish coupe, the new Volante enhances the driving experience still further through the option of exciting convertible driving.

Instantly becoming one of the most beautiful cars in its class, Vanquish Volante crucially retains the coupe’s dynamic character and sporting capability. It boasts the same new AM11 6.0-litre V12 engine as the coupe and the same blistering performance figures, meaning the 0-62 mph sprint is despatched in just 4.1 seconds (estimated) while the top speed stands at 183 mph. 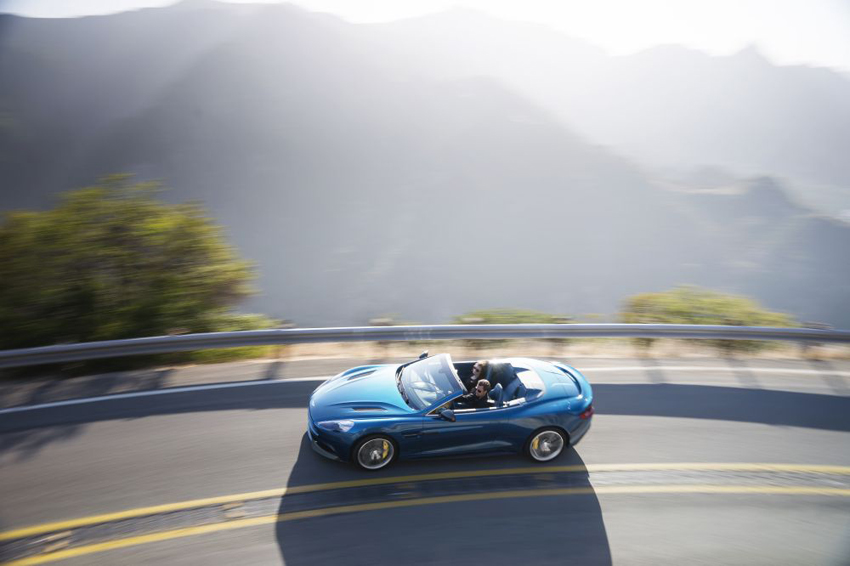 Announcing the arrival of the Vanquish Volante Aston Martin CEO Dr Ulrich Bez said: “This car is what luxury super GT driving is all about. Great performance, fantastic style and exhilarating Volante motoring in one superb package. 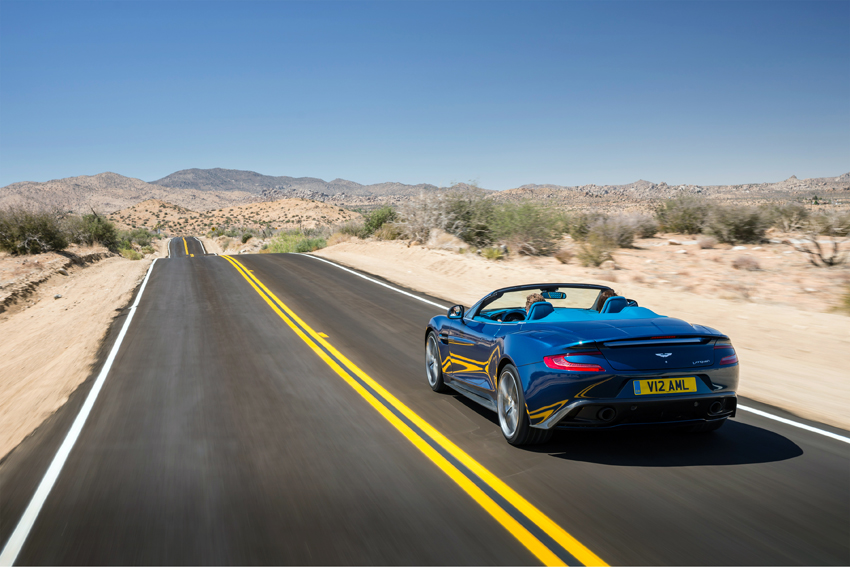 “Aston Martin is celebrating 100 years of excellence in 2013, and the arrival of this new sports car – our ultimate Volante – underlines that our mission to make the next 100 years even more successful is starting perfectly.”

The design of Vanquish Volante represents the latest take on Aston Martin’s iconic visual language. Styling cues such as the elegant waist, elongated side strakes and LED rear light blades are derived from the One-77 supercar while the folding fabric roof sits beneath a tonneau and decklid that have been aerodynamically tuned for optimum performance. 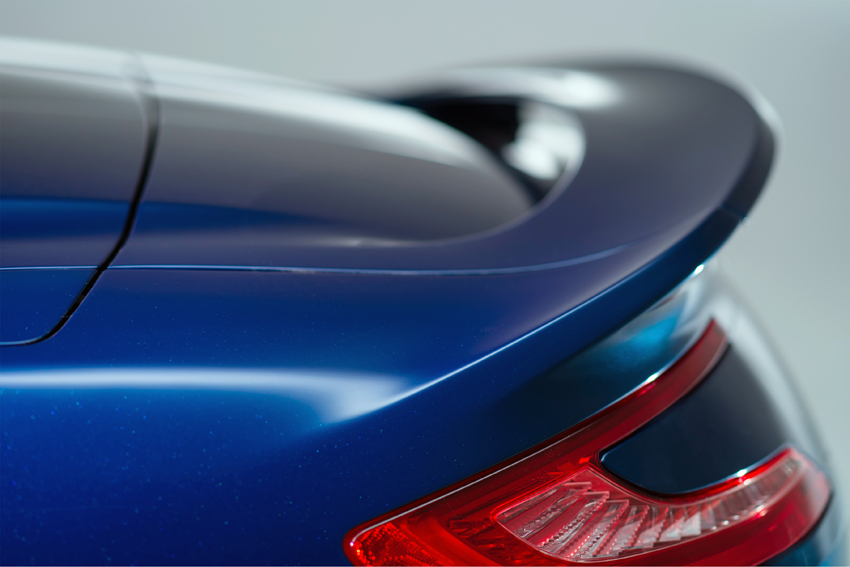 The windscreen, meanwhile, is now full height – a first for Aston Martin – which means that the glass runs up to meet the fabric roof, thereby achieving a particularly clean transition.

The Vanquish Volante’s ‘suit’ of carbon fibre panels cloaks a cabin that is both sophisticated and comfortable. The 2+2 cabin is elegantly attired in authentic and luxurious materials: full grain Luxmil leather with optional quilting, metal controls and satin chrome trim underscore the car’s well-appointed nature.

Each body panel on the car is constructed from carbon fibre not just because of its high strength-to-weight ratio, but also for its flexibility of form. This not only reduces mass but means that fewer individual body panels are required – reducing joints and contributing to a more coherent and svelte shape.

As practical as it is well-dressed, the Vanquish Volante boasts a boot that’s fully 50% larger than that of the previous DBS Volante. It measures 279 litres – roof up or down – and makes the new Aston Martin the perfect choice for continent-crossing grand tours as well as daily drives. 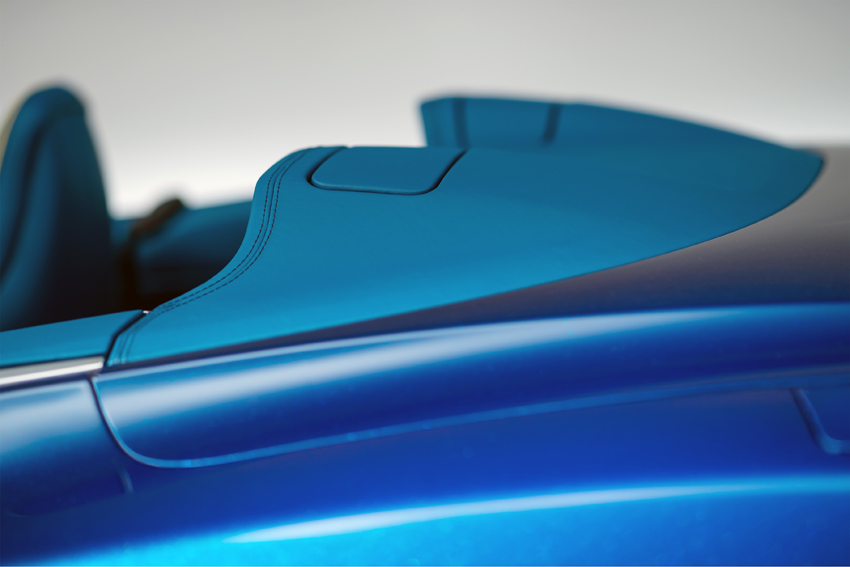 Perhaps one of the most striking interior design elements is the centre stack with refinements providing a more elegant form that is also more intuitive and accessible for both driver and front seat passenger. 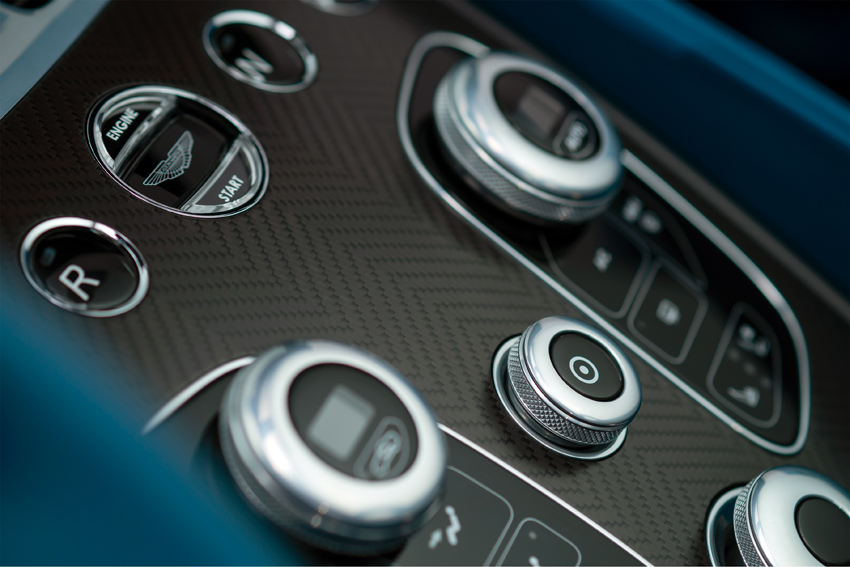 A direct descendent of the One-77 centre stack, the Vanquish and Vanquish Volante’s set-up retains familiar elements such as the ECU engine start button and glass gear selection buttons while featuring a new infotainment system and a significantly more user-friendly design.

The facia trim now stretches down the whole centre stack and is manufactured from a single piece of material giving a uniform finish. 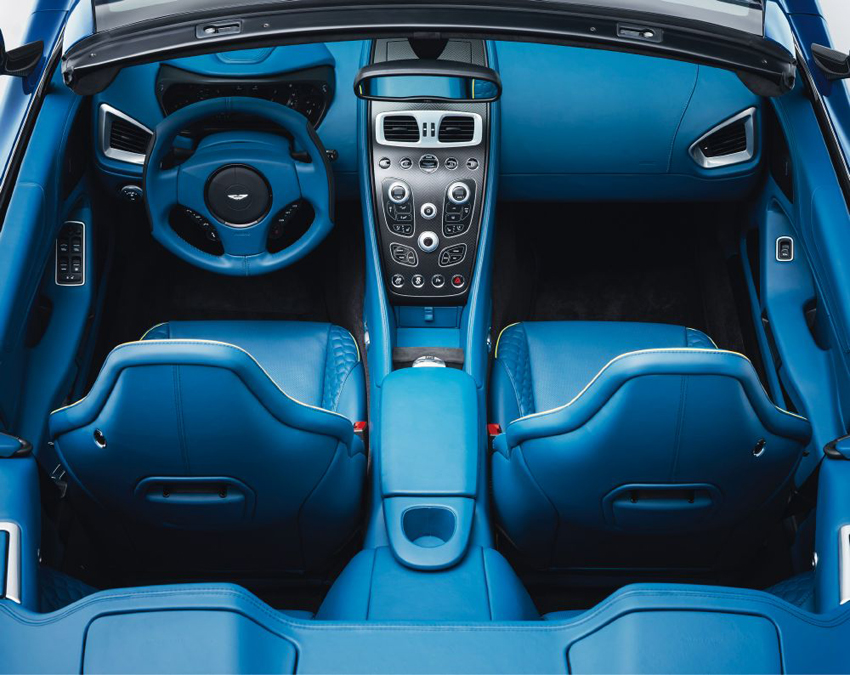 The user interface boasts a simple, ergonomically efficient layout as well as technological updates that make it the brand’s most advanced in-car system available today. 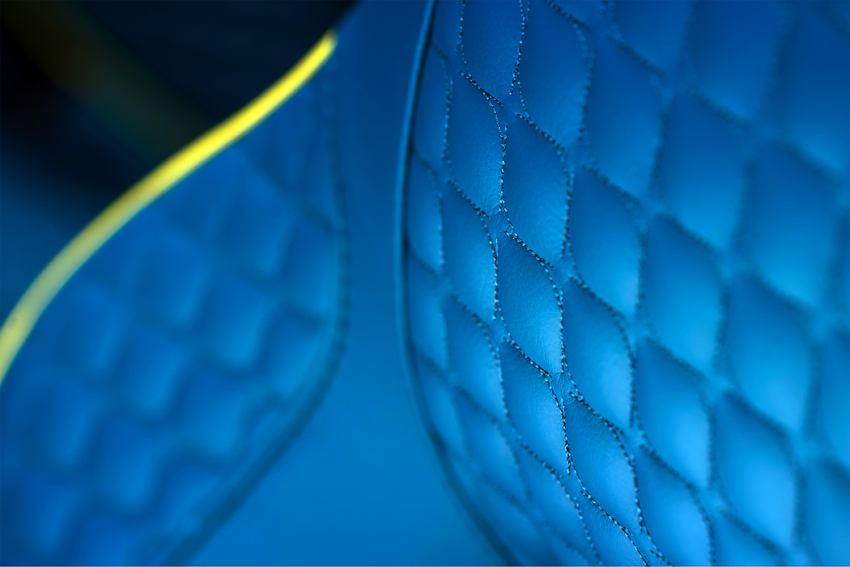 Capacitive glass buttons with illumination and haptic feedback feature in the rest of the centre stack’s switchgear. Haptic feedback is more commonly found in touch-screen mobile phones and Aston Martin became among the first significant luxury car manufacturers in the world to use the technology in a series production model when it debuted on Vanquish coupe in 2012. 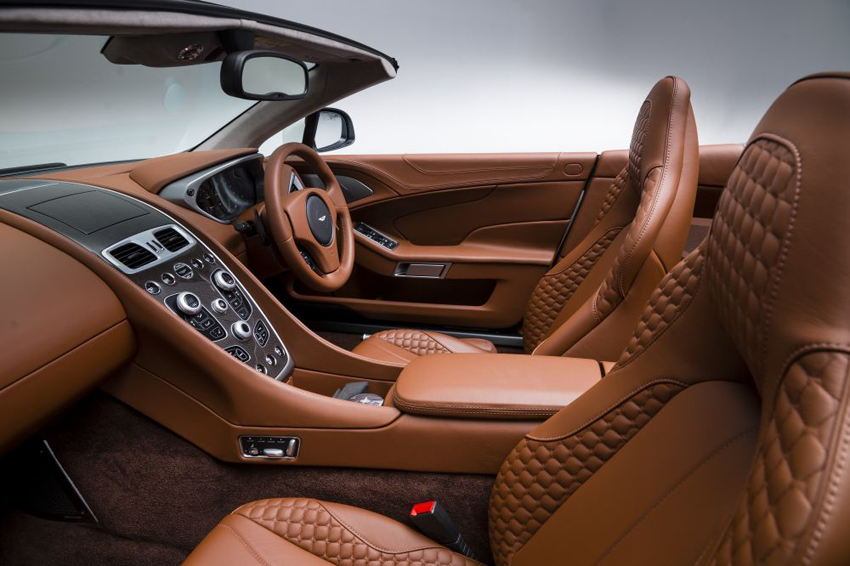 Aston Martin Design Director Marek Reichman explained: “Vanquish Volante is a sports car, of course, but more even than that it is the ultimate Volante. A car which follows a long line of elegant Aston Martin convertibles, this super GT is sculpted to convey sophistication as much as raw power.

“The aerodynamically shaped tonneau, the proportions of the folding fabric roof, the luxurious nature of the cabin – these elements have been pored over by the Design team, working with our Engineering colleagues, to ensure we deliver the aesthetic appeal for which Aston Martin is renowned around the world.” 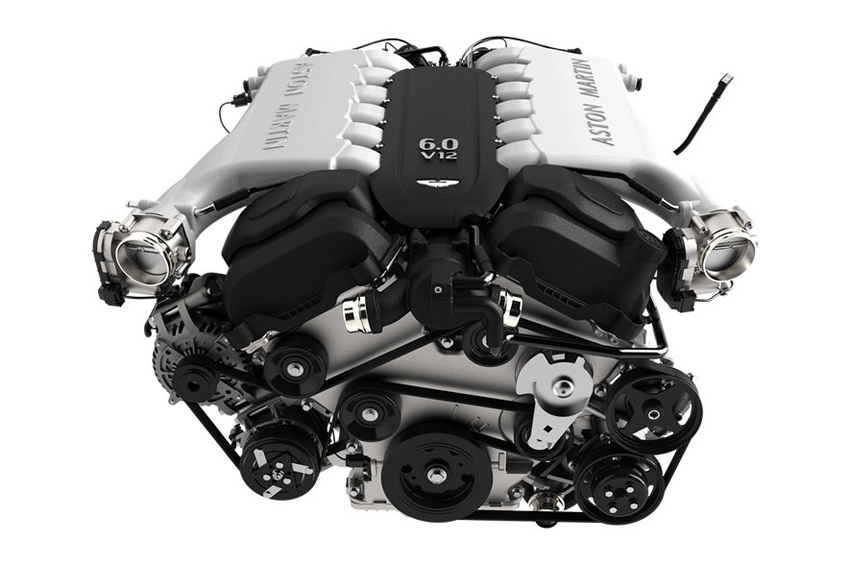 The dynamics have been tuned precisely, with new springs and damper settings calibrated to deliver the same crisp handling yet compliant ride as the coupe.

Strenuous efforts have been made to limit the new car’s weight; contributing to its impressive performance, agile handling and compelling power-to-weight ratio. The combination of controlled weight, near-perfect 51:49 weight distribution, a powerful V12 engine and a performance-honed six-speed transmission unite to make the Vanquish Volante as rewarding on the move as it is beautiful standing still. 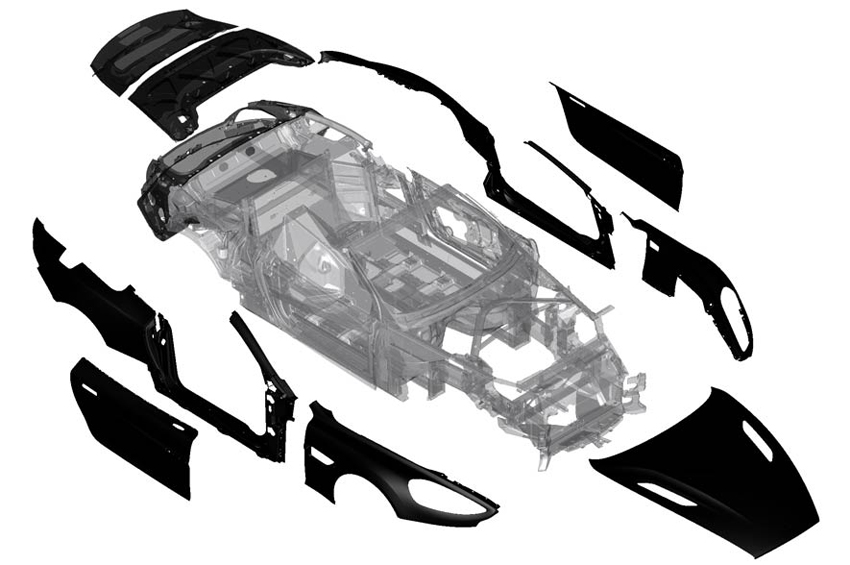 Like its coupe counterpart, the Vanquish Volante uses the latest generation of Aston Martin’s class-leading VH (Vertical Horizontal) architecture, a lightweight bonded aluminium structure that provides outstanding strength and rigidity. In this iteration, the Vanquish now includes the addition of significant semi-structural carbon fibre components, as well as the use of bonding derived directly from the latest aerospace technologies.

As well as being light, strong and flexible in its application, the gen4 VH architecture is also extremely rigid. The new Vanquish Volante is, in fact, 14% torsionally stiffer than the DBS Volante which preceded it, making it highly resistant to flex and allowing for responsive and predictable handling. 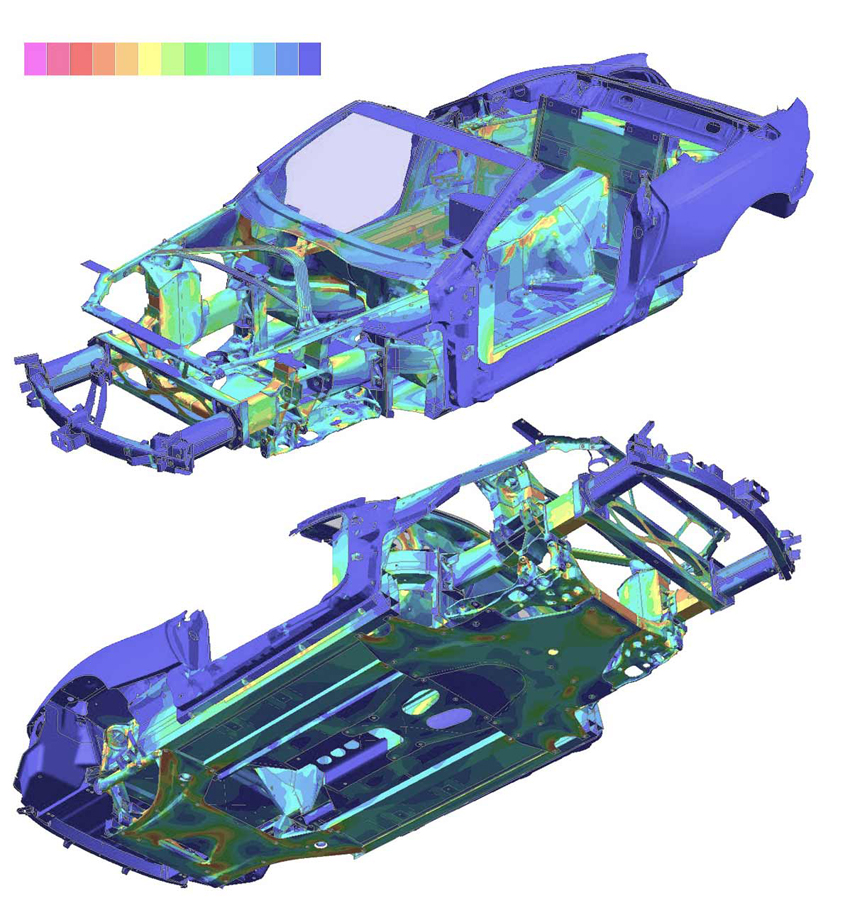 This rigid structure also provides an ideal foundation from which the suspension can control the vehicle effectively, further highlighting the importance of the body structure and the effect it has on the dynamic performance of the car. 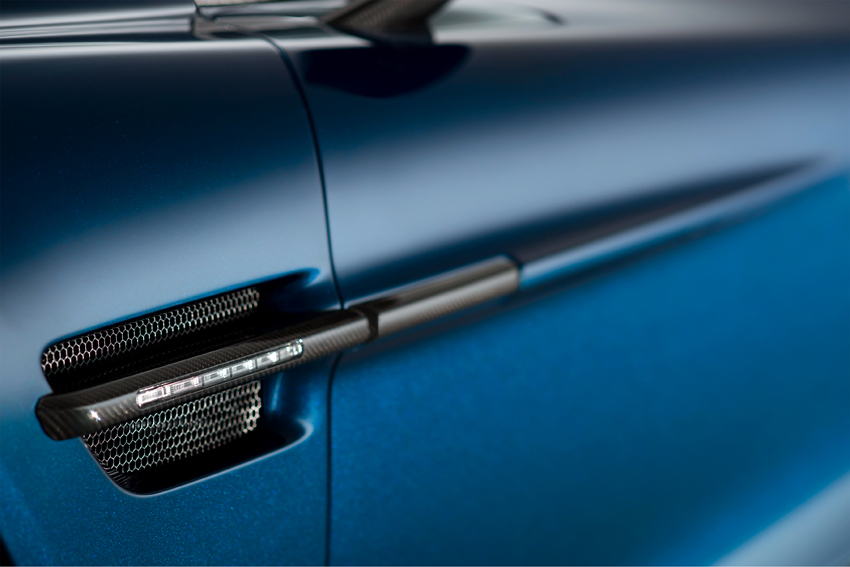 Aston Martin’s engineering teams have worked particularly hard to minimise the weight outside the wheelbase of the new car to reduce yaw inertia. As a result, carbon fibre has been used extensively in the rear structure and the weight of the aluminium front structure has been limited.

To take full advantage of its precise and rigid architecture, the Vanquish Volante employs a battery of sophisticated technologies including Dynamic Stability Control (DSC) and Positive Torque Control (PTC).

The ADS automatically alters the suspension settings to ensure the driver has high levels of control at all times, with the ability to respond quickly to different driving conditions. The different damping modes available help significantly broaden the Vanquish Volante’s character, adapting its set-up to suit the driver’s mood and requirements. Thus it can be a cruising GT car in Normal mode with the capacity to morph into an assertive sports car in Sport and Track modes. 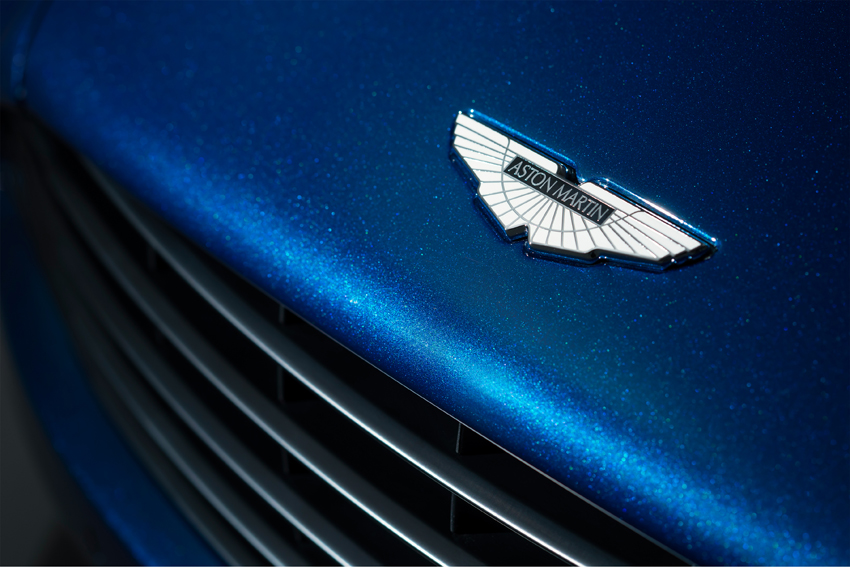 The damper settings are determined by an electronic control unit which takes sensor readings from the car’s systems including throttle position, brake position, steering wheel rotation and vehicle speed. This data establishes the prevailing driving conditions and the demands the driver is making on the car. 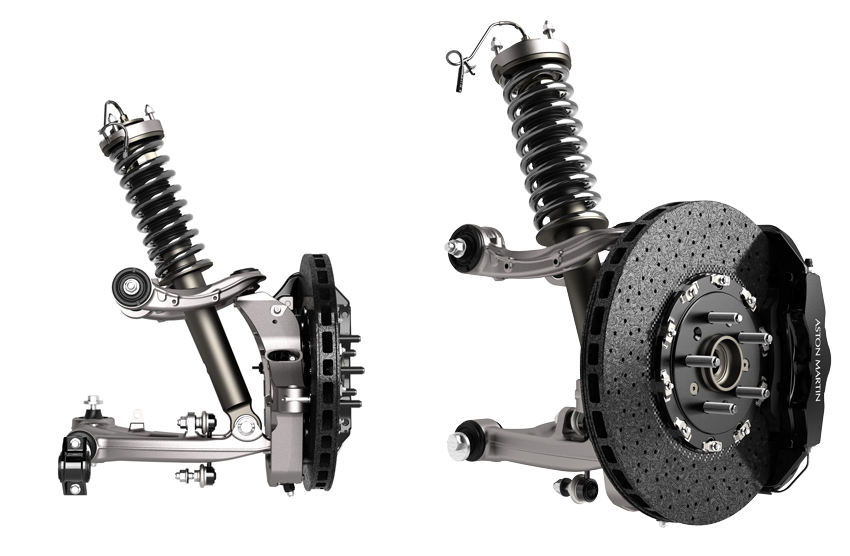 The car’s braking system features third generation Brembo Carbon Ceramic Matrix (CCM) parts to deliver shorter stopping distances with resistance to fade in even the most demanding driving conditions. CCM brakes are also lighter than a conventional system, reducing the weight of the car overall and, in particular, the unsprung weight and rotational masses, further enhancing the performance of the suspension. 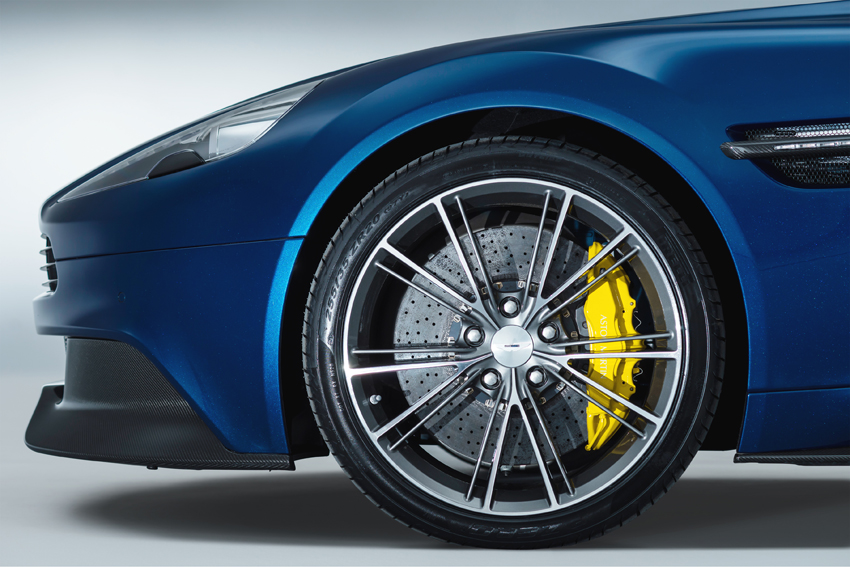 Aston Martin CEO Dr Ulrich Bez added: “Vanquish Volante, like the Vanquish coupe before it, uses the very latest technologies employed in the very best ways to create a sports car which is easy to control, and to enjoy dynamic performance at the finest level. 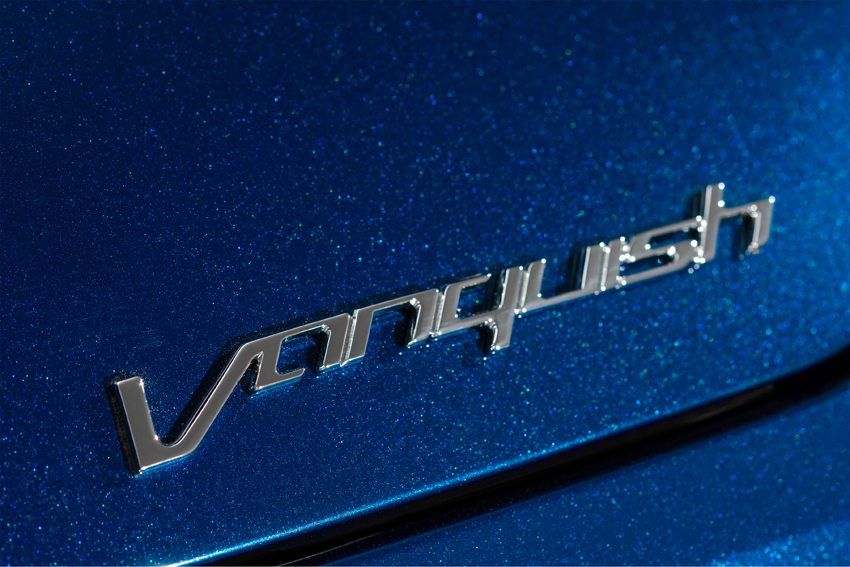 “This is not simply a great-looking car – this is a great car engineered and crafted for the connoisseur by people dedicated to delivering exceptional sports cars with clearly defined characters.”