eGarage Stories in Motion™
The Mercedes-Benz A 45 AMG: Driving Performance for the new generation 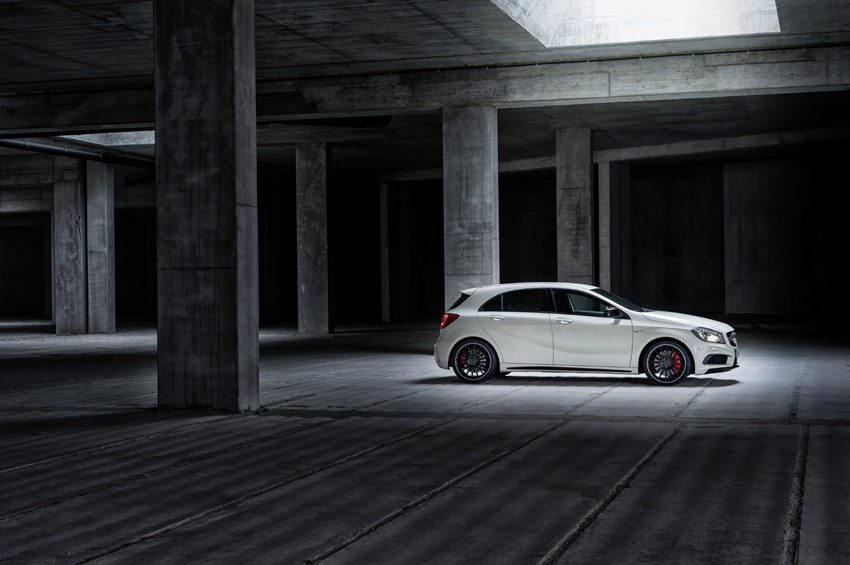 The A 45 AMG sees Mercedes-AMG embarking on a new era. For the first time in the company’s history extending back over more than 45 years, Mercedes-Benz’s performance brand is offering a fascinating high-performance vehicle in the compact class, representing a dynamic proposition for a new target group. With a maximum output of 265 kW (360 hp) and up to 450 Newton metres of torque, the AMG 2.0-litre four-cylinder turbo engine is the most powerful series production four-cylinder engine in the world. The sensational power density of 133 kW (181 hp) outstrips even the most powerful super sports cars. At the same time, the engine also boasts supreme efficiency and complies with the EU6 emissions standard. The A 45 AMG also leads its segment in terms of fuel consumption, running on 6.9 litres per 100 kilometres in NEDC combined mode. These credentials indicate that a further high-performing member of the BlueDIRECT family is now taking to the road. The performance-oriented AMG 4MATIC all-wheel drive onboard the A 45 AMG sets new standards in the car’s segment. 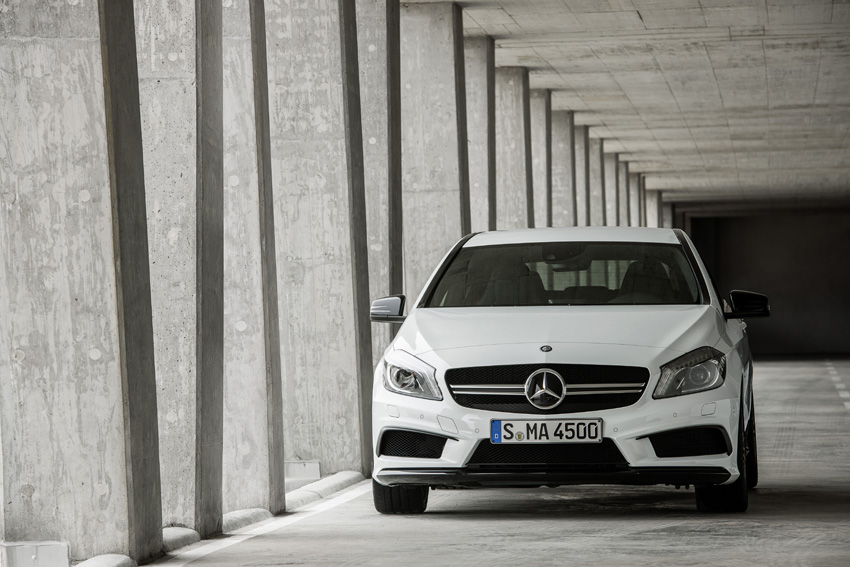 The substance of the new Mercedes-Benz vehicle architecture for front- and all-wheel drive provides the perfect basis for the A 45 AMG and at least two other high-performance premium automobiles from Affalterbach. In designing and developing the A 45 AMG, the experts at AMG have drawn on the company’s decades of experience in motorsport and the production of powerful, high-performance vehicles. As such, the A 45 AMG will inherit the corporate DNA and embody the AMG brand claim “Driving Performance” to perfection: a fascinatingly sporty driving experience combined with impressive craftsmanship and pronounced individuality. 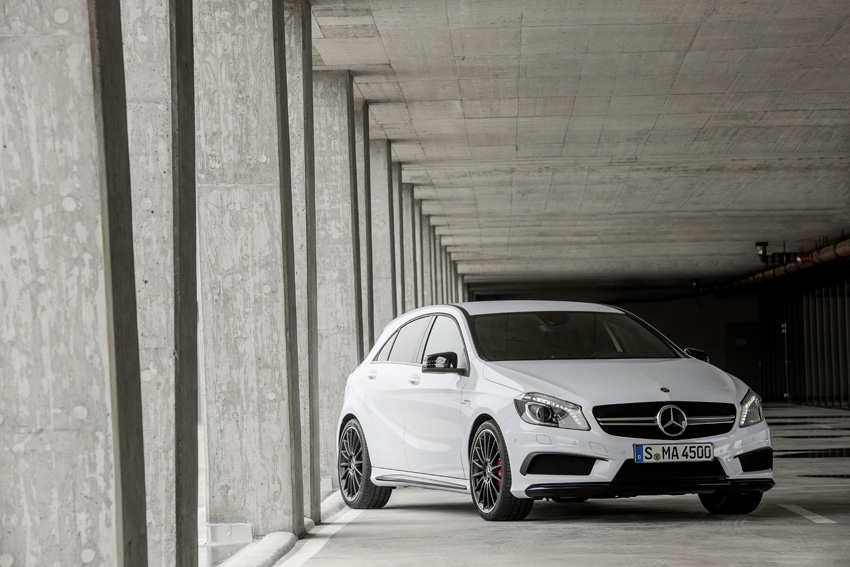 “The A 45 AMG will enable Mercedes-AMG to appeal to new customers and tap new markets,” observes Ola Källenius, Chairman of Mercedes-AMG GmbH. We are adding an extremely attractive model with exceptional performance data to our range of unique high-performance automobiles.” 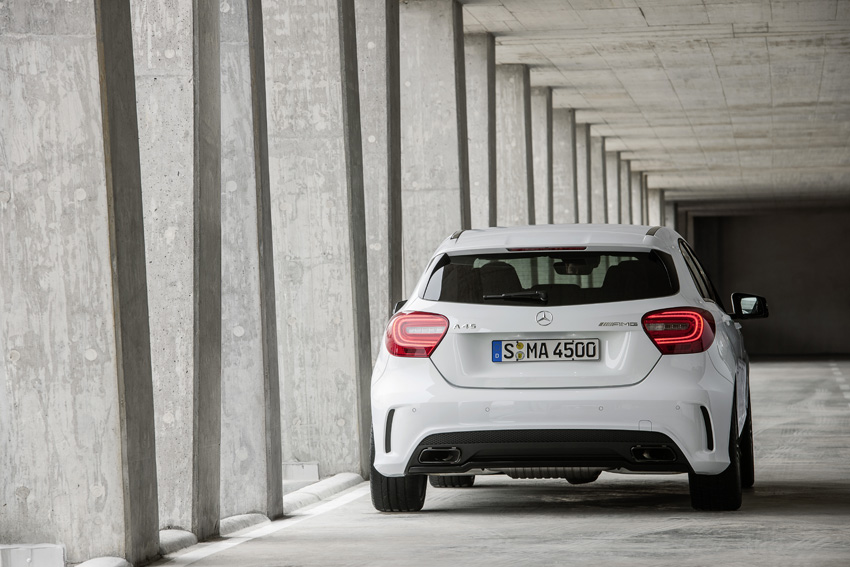 “With the new A 45 AMG we have well and truly achieved our aim of developing the most dynamic, powerful and efficient four-cylinder series production car,” comments Tobias Moers, Head of Overall Vehicle Development and Board Member of Mercedes-AMG GmbH. With its impressive high-tech package and the performance-oriented AMG 4MATIC all-wheel drive, the A 45 AMG is a thoroughbred AMG through and through.” 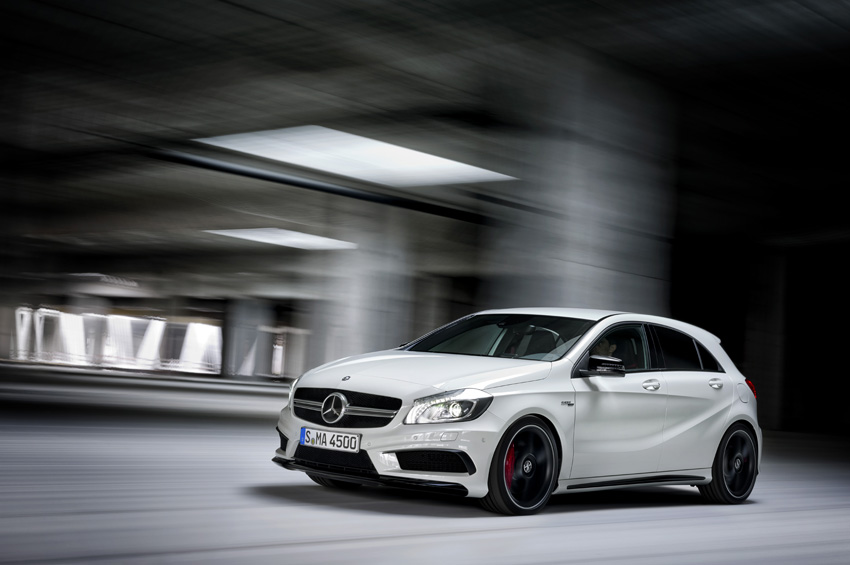 Dynamic and individual vehicle for new target group
Spanning the age range from 30 to mid-40, the target group is younger than
the AMG clientele to date. In successful careers and with an independent frame of mind, these customers seek a dynamic and individual vehicle. They wish to lend expression to their style- and trend-oriented way of life with a car from a recognised high-performance brand. The A 45 AMG provides the predominantly urban target group with an agile high-performance vehicle. Mercedes-AMG accommodates their tech-savvy and individual outlook on life with an extremely broad selection of optional equipment and appointments, colours and materials. 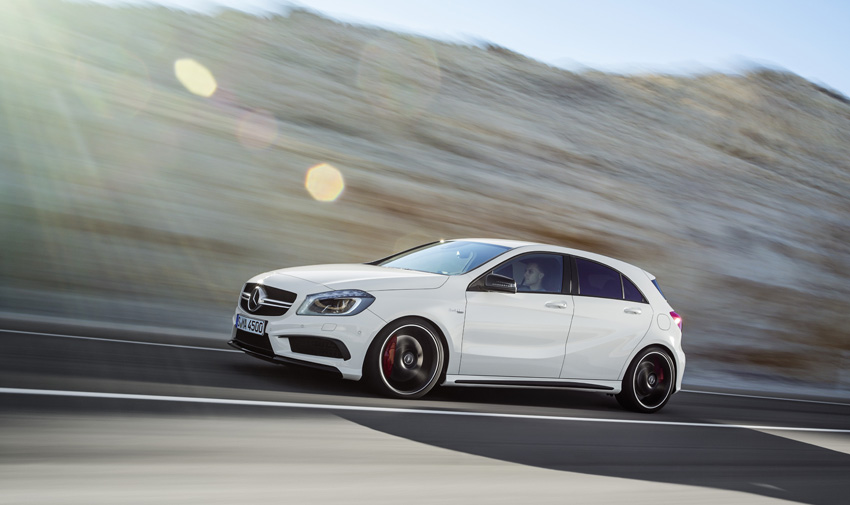 Typically AMG: the most powerful series production four-cylinder engine in the world
In the A 45 AMG, Mercedes-AMG has developed a typical high-performance vehicle for the younger target groups. Two figures show that the A 45 AMG holds pole position in its displacement segment: the newly developed AMG 2.0‑litre turbo engine is the most powerful series production four-cylinder turbo engine in the world. A maximum output of265 kW (360 hp) and up to 450 Newton metres of torque are unmatched by any other mass-produced turbocharged four-cylinder engine worldwide The power density of 133 kW (181 hp) is also absolutely unrivalled. In this discipline, the new AMG high-performance turbo engine even outstrips the most powerful super sports cars.
The high power and torque output and the combination with the performance-oriented AMG 4MATIC all-wheel drive as standard lead to extremely dynamic performance: the A 45 AMG accelerates from zero to 100 km/h in 4.6 seconds, while its top speed stands at 250 km/h (electronically limited). The specially developed AMG engine is also a model of efficiency – the A 45 AMG also leads its segment on this front, with fuel consumption of 6.9 litres per 100 kilometres in NEDC combined mode. This is accompanied by particularly low exhaust emissions: the A 45 AMG already complies with the EU6 emissions standard which is not scheduled to enter into force until 2015, combined with the limit for the particle count per kilometre of 6 x 1011 which will be mandatory from 2017. 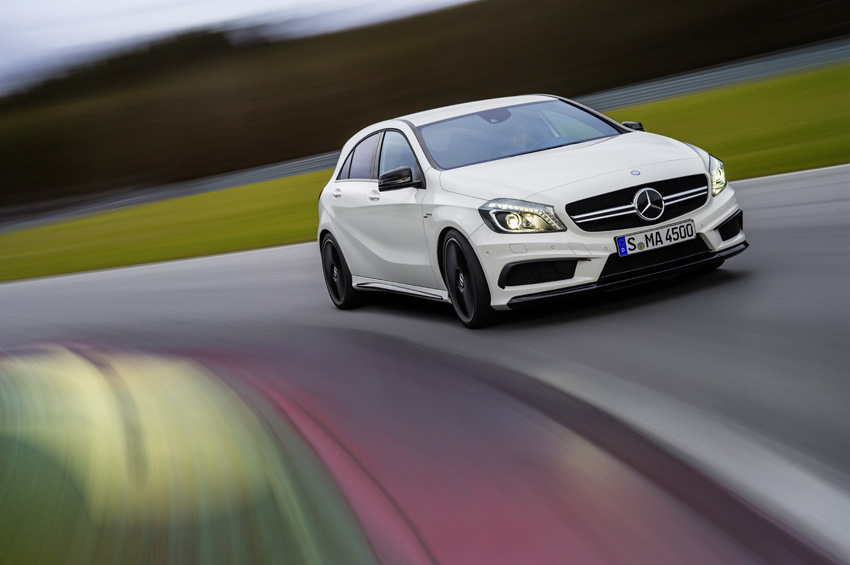 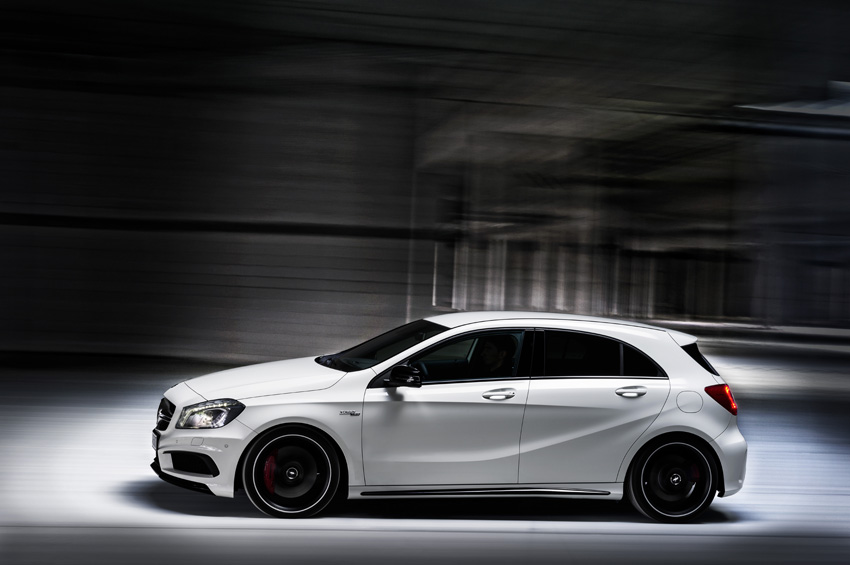 Twin-scroll turbocharger and AMG sports exhaust system with exhaust flap
Mercedes-AMG addresses the essential challenges concerning the response of small-displacement turbo engines by means of a twin-scroll turbocharger, maximum derestriction of the exhaust system and an innovative injection strategy. The twin-scroll technology provides for a more spontaneous build-up of charge pressure, making effective use of exhaust gas back pressure, exhaust gas temperature and exhaust gas impulse. This results in a swifter build-up of torque right from the lower rev range. As a positive side-effect, the twin-scroll technology also benefits fuel consumption and exhaust emissions. At a maximum charge pressure of 1.8 bar, the AMG 2.0-litre four-cylinder turbo engine also leads the field in this respect.
The AMG sports exhaust system features large pipe cross-sections and an automatically controlled exhaust flap. This technology, which is familiar from the SLK 55 AMG, reconciles the two apparently conflicting aims of tangible dynamism and hallmark Mercedes comfort on long journeys. The flap is continuously adjusted by map control according to the power called up by the driver, load status and engine speed. The two striking tailpipes of the AMG sports exhaust system emit a fascinating, full engine sound which is particularly impressive during powerful acceleration.
An AMG Performance exhaust system with exhaust flap and featuring a dedicated tailpipe trim design is optionally available for the A45 AMG. This provides for an even more emotional and striking engine sound when the throttle is open and during gear shifting. The double-declutching function during downshifting and the interruption of ignition and injection during upshifting under full load produce a particularly throaty sound with the AMG Performance exhaust system and create a level of emotionality which is otherwise the reserve of engines with more than 4 cylinders. 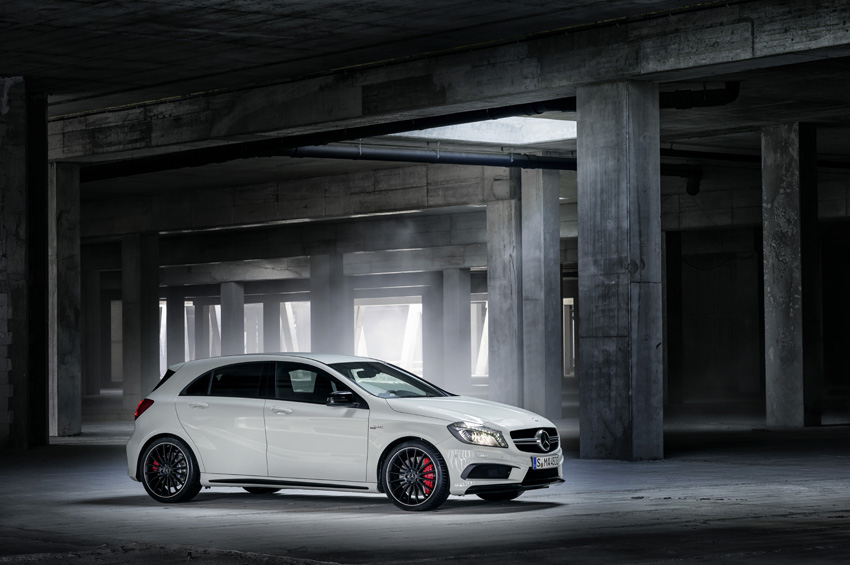 High-performance cooling system with components from the SLS AMG
The high driving dynamics of the A 45 AMG call for a highly effective cooling system. On the basis of the components belonging to the SLS AMG, a low-temperature circuit is additionally deployed for air-water charge air cooling of the four-cylinder turbo engine. The large cooler section at the front level of the cooling module is supplemented by an additional cooler in the wheel arch. Together with the charge air cooler which is connected in series, a high-performance electric pump ensures the required flow through the water coolers located behind the large intake ports. This provides for ideal cooling of the highly compressed charge air, thereby contributing towards optimum engine performance.
Cooling of the transmission oil is integrated in the water cooling circuit for the engine. The water cooler positioned behind the front apron is supported by the heat exchanger which is fitted directly on the transmission and supplied with cooling water as required by means of an auxiliary pump.
Engine production – a tradition of hand-built excellence
Similarly to all eight- and twelve-cylinder engines, the new AMG 2.0-litre four-cylinder turbo engine is also hand-built according to the traditional AMG philosophy of “one man, one engine”. An exclusive assembly line has been set up for the new AMG engine at the Mercedes-Benz engine production plant in Kölleda – where all BlueDIRECT four-cylinder engines are built for the A- and B-Class models. A characteristic feature of the “one man, one engine” production process is the AMG engine plate bearing the signature of the responsible engine fitter. Apart from serving as an AMG hallmark confirming superlative production quality, the AMG engine plate also attests to the peerless DNA of Mercedes-Benz’s high-performance brand. 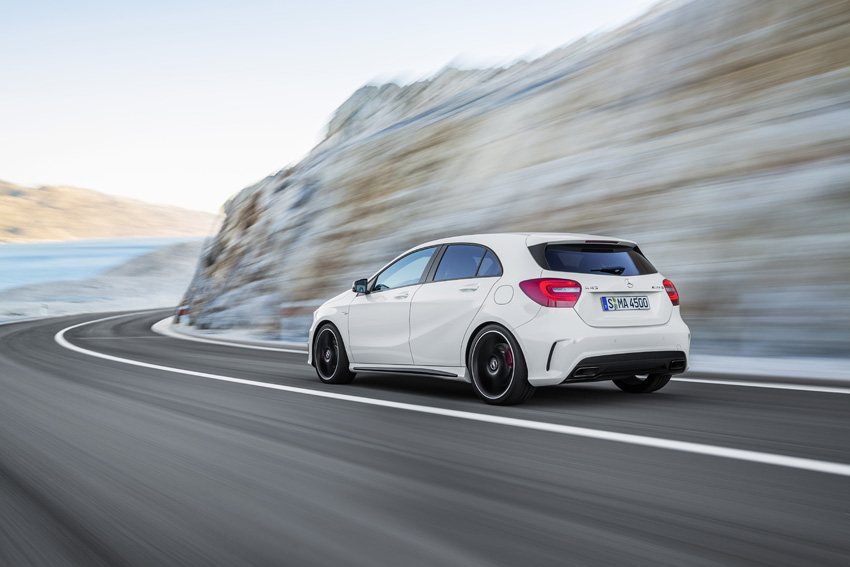 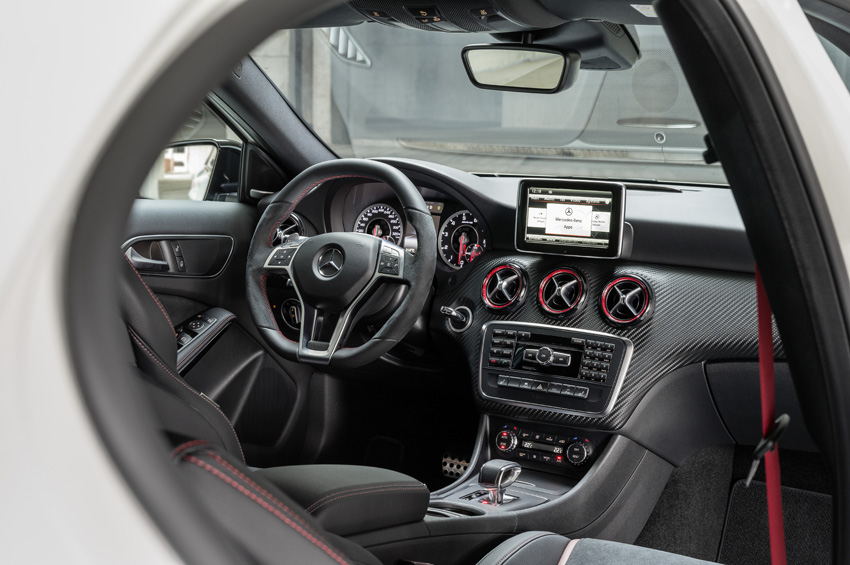 Expressive and exclusive: the A 45 AMG “Edition 1” 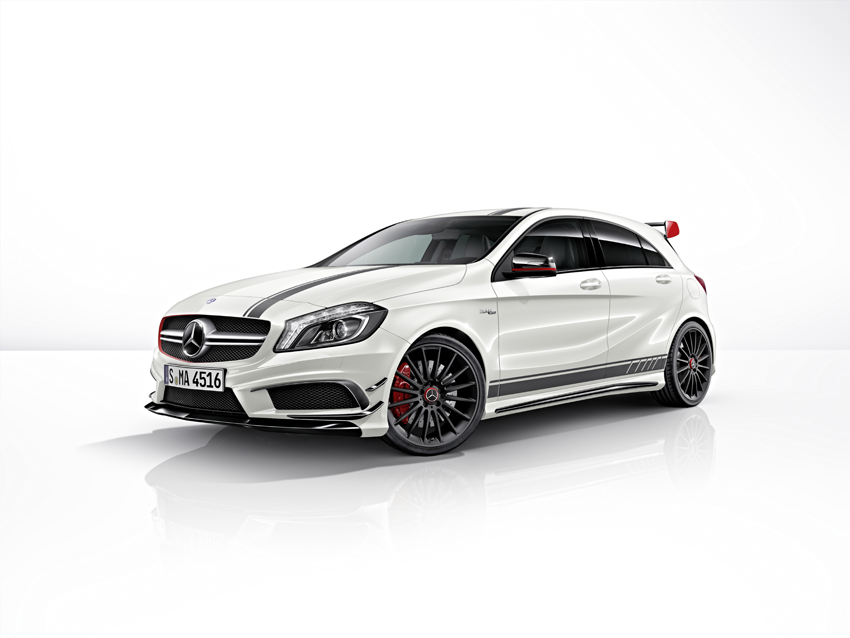 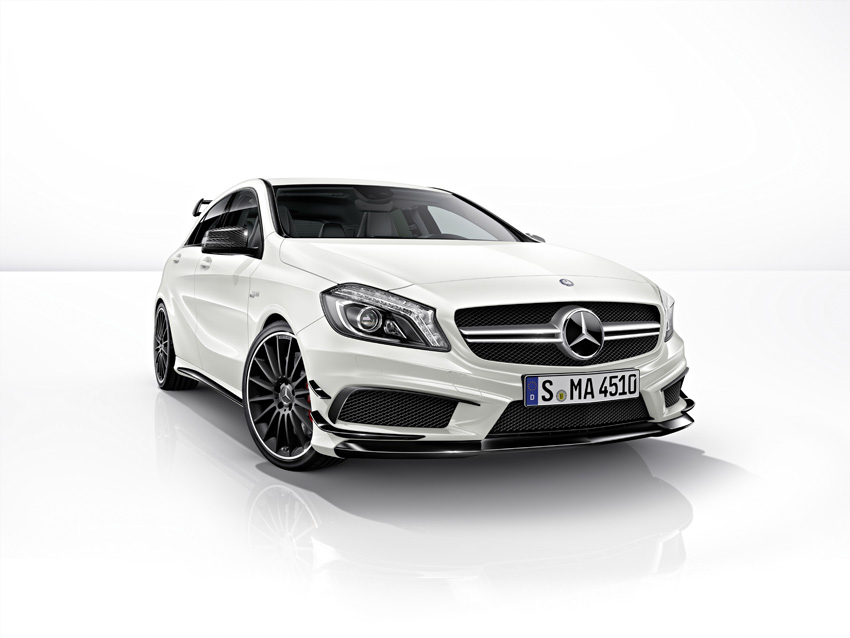 The A 45 AMG “Edition 1” stands apart both on a technical level and in terms of appearance. As is familiar from the CLS 63 AMG Shooting Brake, the fully appointed “Edition 1” model variant boasts an expressive composition of exclusive exterior and interior details. The A 45 AMG “Edition 1” focuses on the car’s affinity to motorsport: the exterior paint finish in cirrus white corresponds with the AMG sports stripes in matt graphite grey on the bonnet, roof and sides. The red highlights on the radiator grille, exterior mirrors and rear aerofoil leave a lasting impression. These highlights combine to perfection with the red painted brake callipers and the AMG multispoke light-alloy wheels painted in matt black with special AMG hub caps in central-locking look. The 8 x 19 light-alloy wheels are fitted all-round with tyres in size 235/35 R 19. Both the AMG Night package and the Aerodynamics package feature as standard for the “Edition 1”, providing the perfect finishing touch to the model’s motorsport-inspired character. 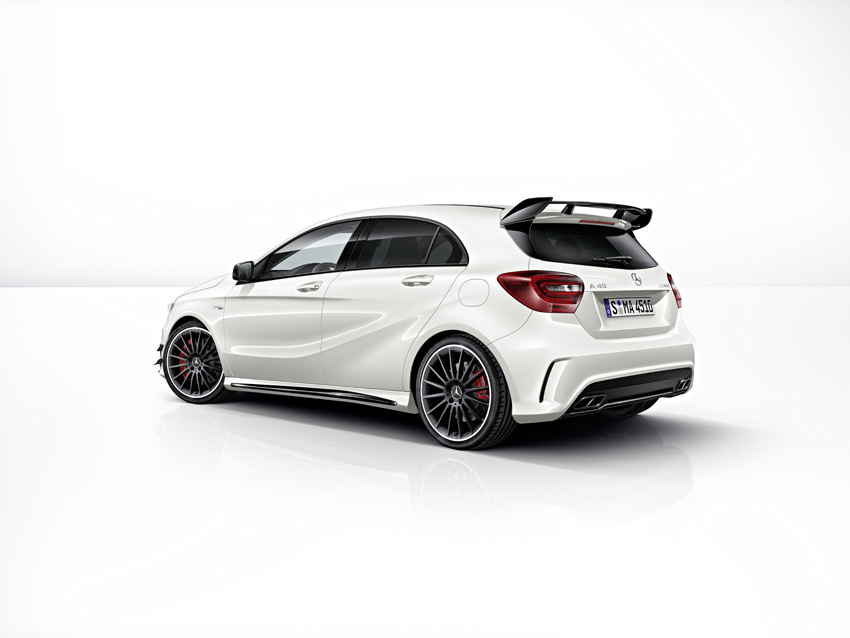 Black and red dominate the interior of the A 45 AMG “Edition 1”, too. Red contrasting stitching embellishes the AMG Performance seats in ARTICO man-made leather/DINAMICA microfibre, the top section of the dashboard in ARTICO man-made leather and the AMG Performance steering wheel in nappa leather/DINAMICA microfibre. Other visual highlights are the E-SELECT lever with embossed AMG emblem and the “Edition 1” badge on the AMG DRIVE UNIT.
Various social media measures have also been developed for the A 45 AMG: the website devoted to the A 45 AMG (URL: www.mercedes-amg.com/a45) allows the new star from AMG to be discovered in interactive mode. Comments, films and pictures from fans of the AMG Twitter and Facebook pages are also displayed for all visitors on the site’s social wall, accompanied by an option for users to publish their own statements.
The sales release date will be 8 April 2013; the market launch in Germany will begin this June. 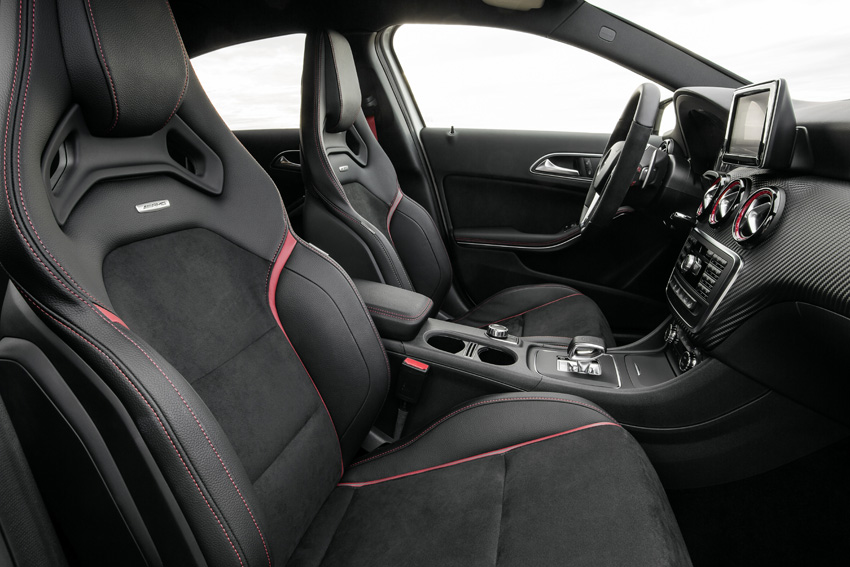