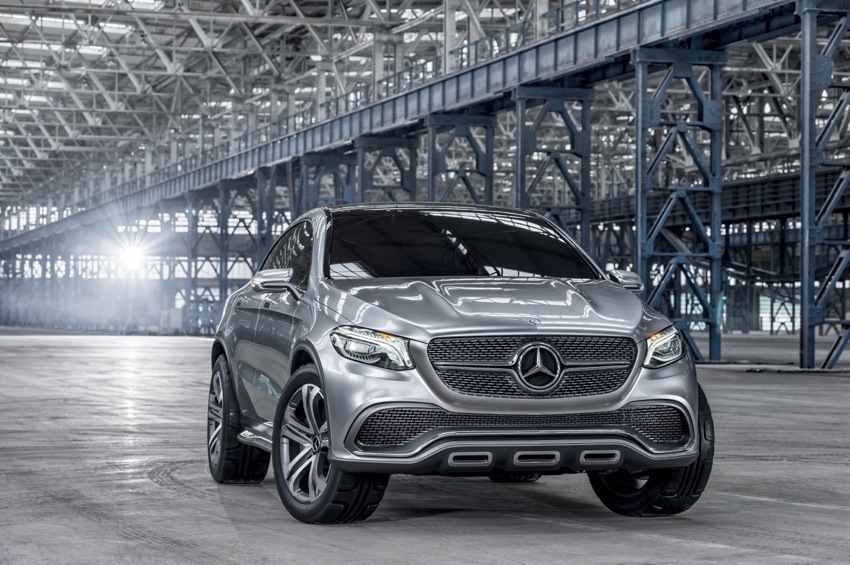 With the Concept Coupé SUV, Mercedes-Benz is raising the standard to a new, higher level in literally multiple respects. This extremely sporty study impresses as a typical representative of the long-standing coupé tradition at Mercedes-Benz, with a flowing side line, stretched greenhouse and striking radiator grille with central chrome louvre. At the same time the Concept Coupé SUV stands out with its muscular wings, large wheel arches, imposing 22-inch wheels, high beltline and generous ground clearance. Its dynamic handling on the road is also on a superior level. Not only thanks to air suspension, but also to the networking of the powertrain, suspension and interior that it realises. The variable dynamic control system “Dynamic Select Control” provides four fundamentally different transmission modes and an individually programmable setup. 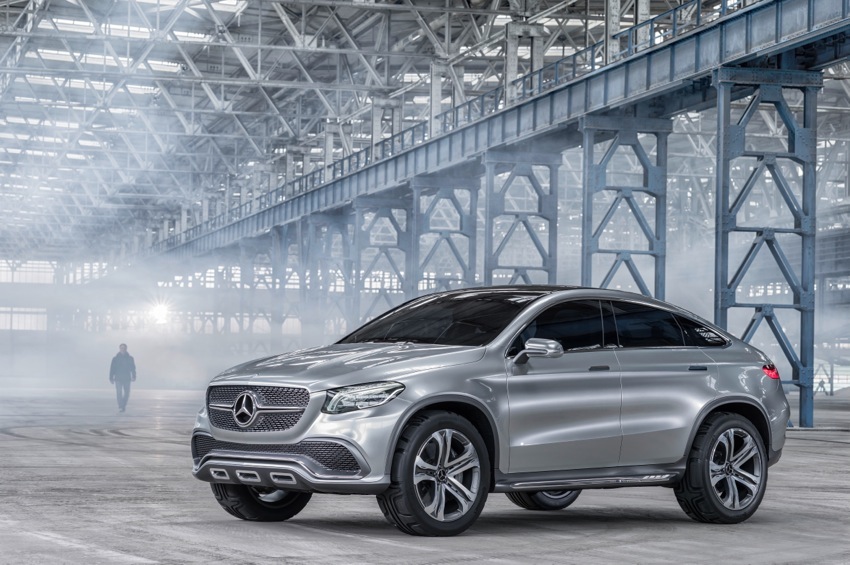 “Sensual as a coupé – visionary as an SUV,” is the succinct choice of words used by Gorden Wagener, Head of Design at Mercedes-Benz, to describe the physiognomy of the Concept Coupé SUV. The four-door, all-wheel drive Coupé has a length of almost five metres, and an imposing width of a good two metres thanks to its broad shoulders and flared wheel arches. At the same time it has a modest height of around 1.75 metres, exhibiting the flat, extended roofline that is typical of a sports coupé. “The Concept Coupé SUV stands out thanks to its extreme proportions and in doing so interprets our hallmark Mercedes coupé design idiom perfectly. With its superior sportiness it conveys a sense of modern luxury and aesthetic aspirations of sensual clarity”, continues Gorden Wagener. Like the recessed door handles, frameless side windows blend perfectly into the vehicle flanks to accentuate the coupé-like character even
further. 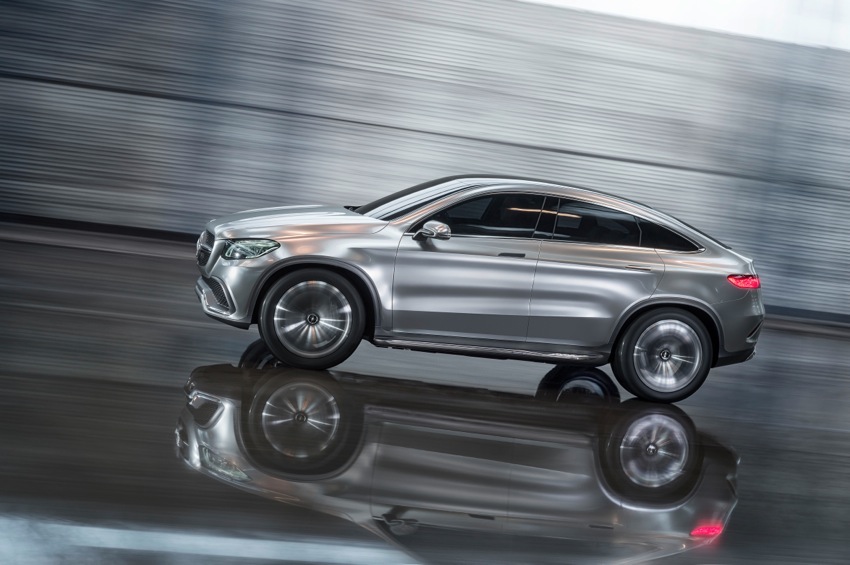 In line with a tradition and like all recent study vehicles, the Concept Coupé SUV is painted in the “ALU-BEAM” paint finish, which is also reminiscent of the technically ground-breaking Silver Arrows of the 1930s and 1950s.
The upright sports grille with single louvre, framed by the three-dimensionally designed modern, all-LED Multibeam headlamps, is the major feature of the front end with its short, stylish overhang. Soft cubes dominate the grille insert, and the forward-sloping bonnet with its typical Mercedes power domes underlines the membership of the Concept Coupé SUVin the line-up of particularly sporty Mercedes-Benz models. A discreet reference to the SUV genes of this study is provided by the harmoniously integrated, illuminated side sills, which are reminiscent of the running boards found on classic SUVs or off-roaders. Indicators have always pointed the way in the best sense of the word, however in the Concept Coupé SUVthey take on a new form. The direction indicators operate with a moving digital light band whose lighting elements light up sequentially from inside to outside, indicating the change in direction in two ways. 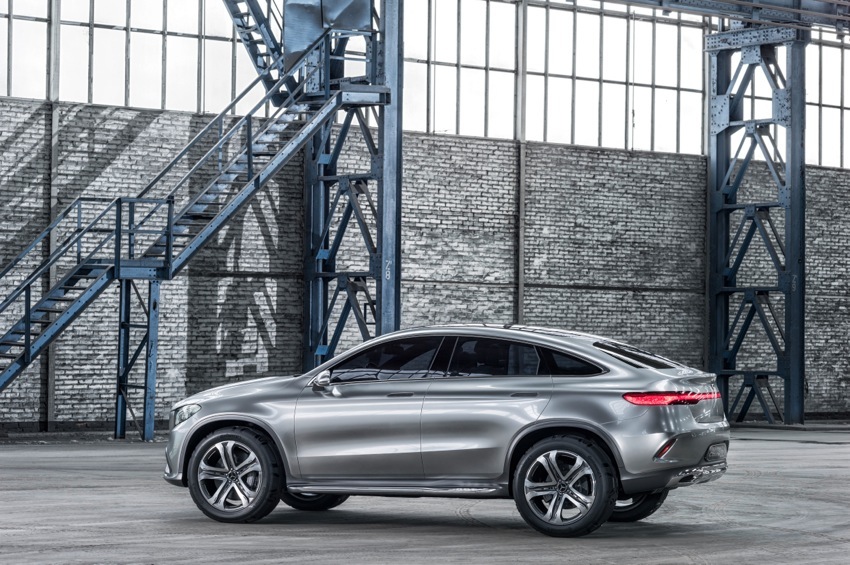 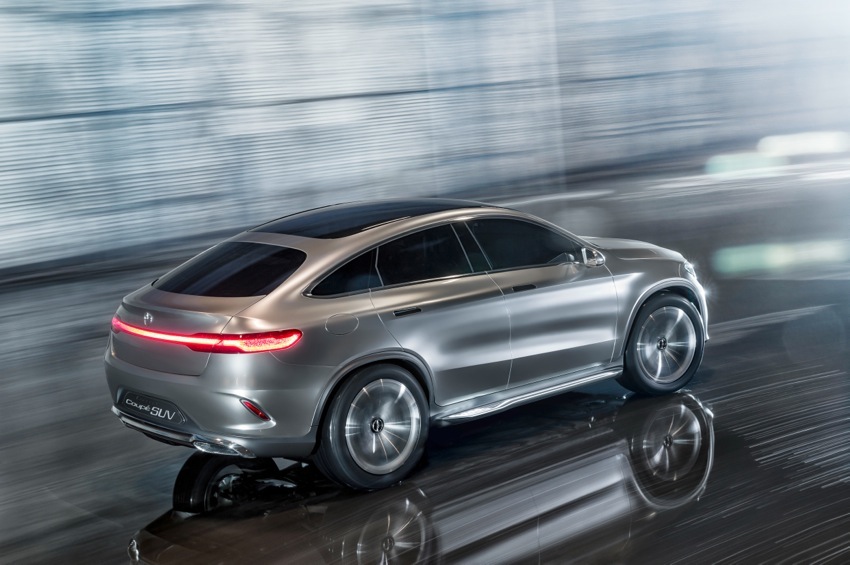 Elegant rear end: in the style of the S-Class Coupé
The coupé-like nature of the Concept Coupé SUV is also emphasised by the design of the rear end with its obvious elements of the design line first presented with the S-Class Coupé, which will be followed by all coupé models from Mercedes-Benz in future. The styling characteristics of this include the slim band of rear lights with their ruby-like, three-dimensional look and the registration plate now incorporated into the rear bumper. Another feature that has for generations distinguished the large coupé models from Mercedes-Benz is the typical shape of the rear window which is rounded off at the top. A discreet SUV reference is made by the simulated underguard into which the tailpipes of the dual-flow exhaust system are integrated. Polished aluminium predominates here, as on the integral door handles, the side sills, the front air intakes and the edging of the greenhouse.
Wide, flush-fitted 22-inch wheels with tyres in size 305/45 R 22 make the vehicle sit squarely on the road, and leave no doubt about the passion of the Concept Coupé SUV: at very first glance this trailblazing study signals its sporty, dynamic ambitions. 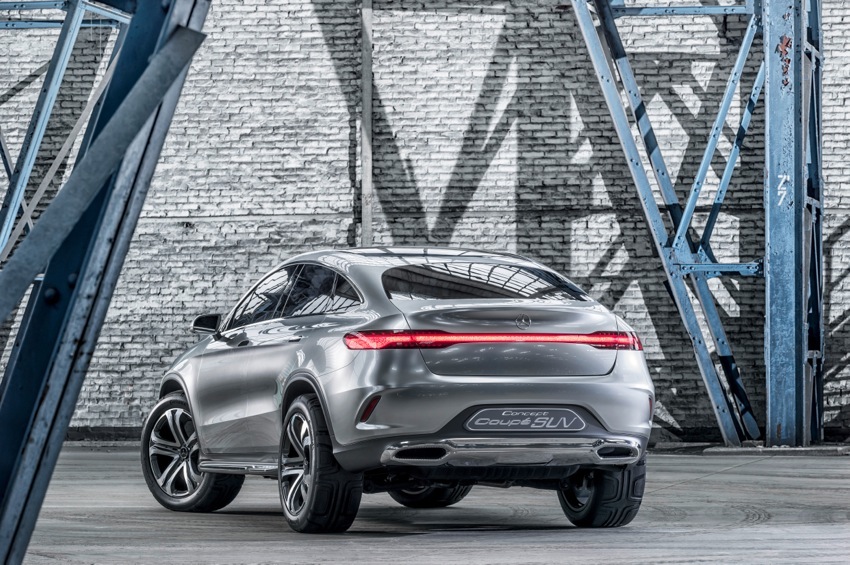 Haute Couture: the Mercedes-Benz coupé range
Developing and creating new model families and vehicle classes has traditionally been one of the strengths of Mercedes-Benz, the inventor of the automobile. This is particularly obvious in the history of its coupés, and most especially in the very recent past. Models such as the four-door Coupés or the Shooting Brakes in the CLS-Class have not only created completely new vehicle classes, but have also had a lasting influence on the model policies of different manufacturers, found numerous imitators and proved to be an outstanding sales success. The same can be said of the CLA-Class, which has been able to transfer the success of the CLS into the compact class and is also extraordinarily popular with customers. With the Concept Coupé SUV, Mercedes-Benz is now taking a similar approach. The study follows this coupé theme within the SUV sector consistently and demonstrates how a four-door, all-wheel drive series production coupé might look. 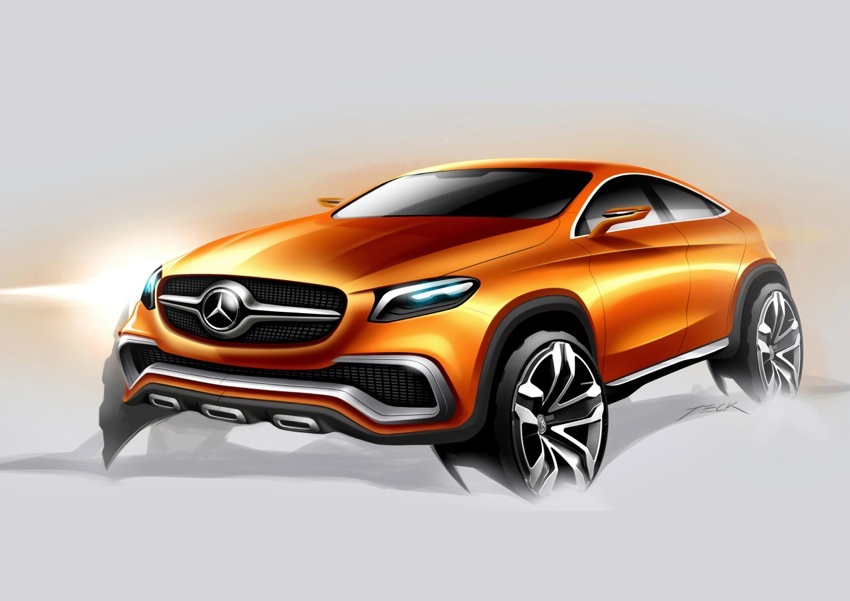 Concept Coupé SUV – pilot project for new SUV worlds
As a compact all-rounder, the GLA has already translated the suggestion of a coupé-like design idiom into an SUV format, thereby giving indications of a new SUV line from Mercedes-Benz which the Concept Coupé SUV now fully brings to perfection. With this concept car, Mercedes-Benz is announcing the possible expansion of the previously uniform SUV off-roader family: The Concept Coupé SUV illustrates the possibilities of a more sporty and dynamic “on-road line”.The model families of the GLA, GLK, M, GL and G-Class stand for a versatile and superior “off-road line”. 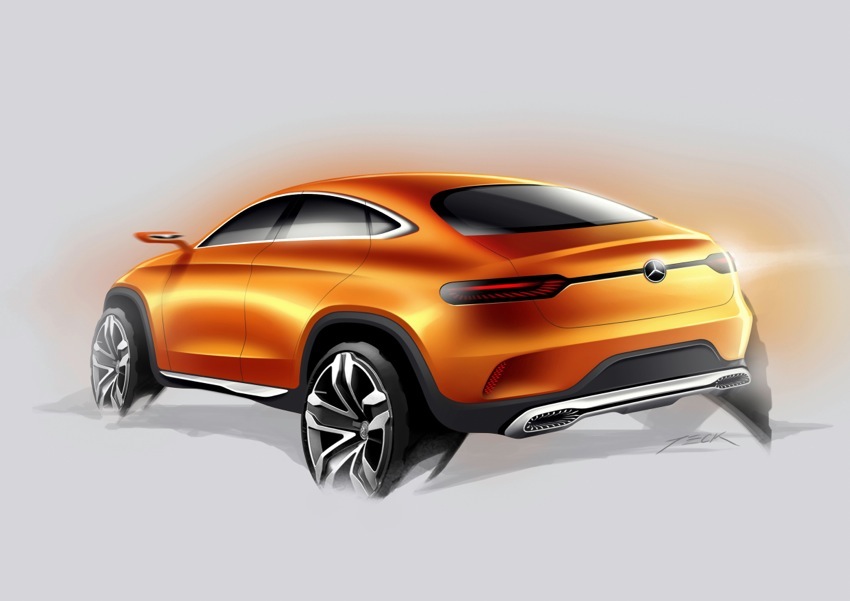 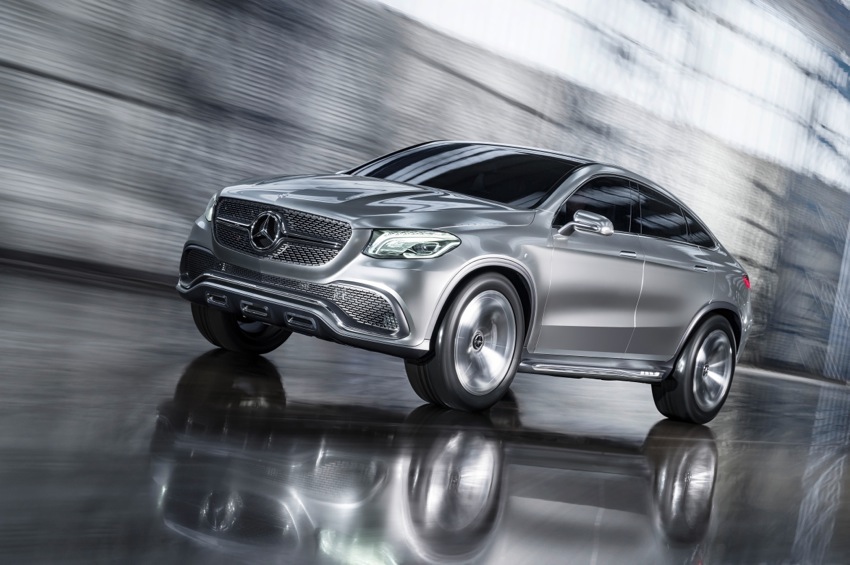 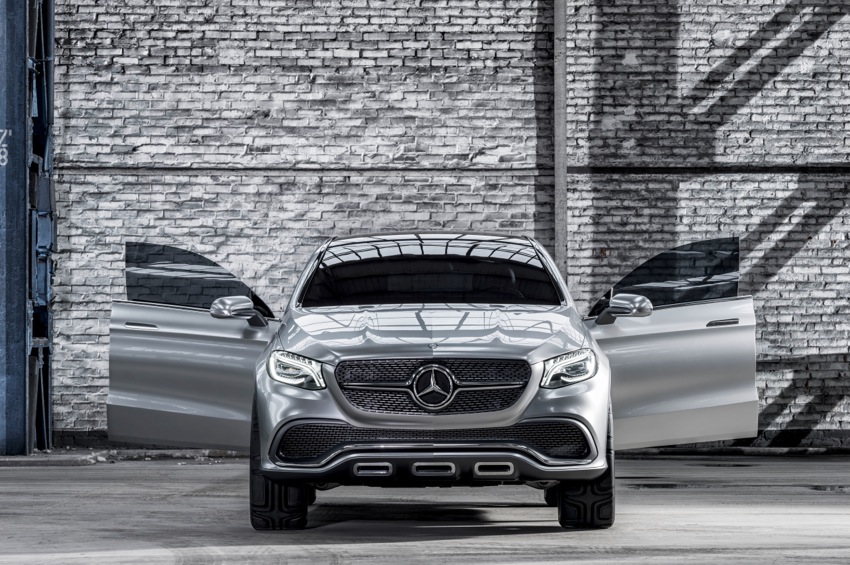 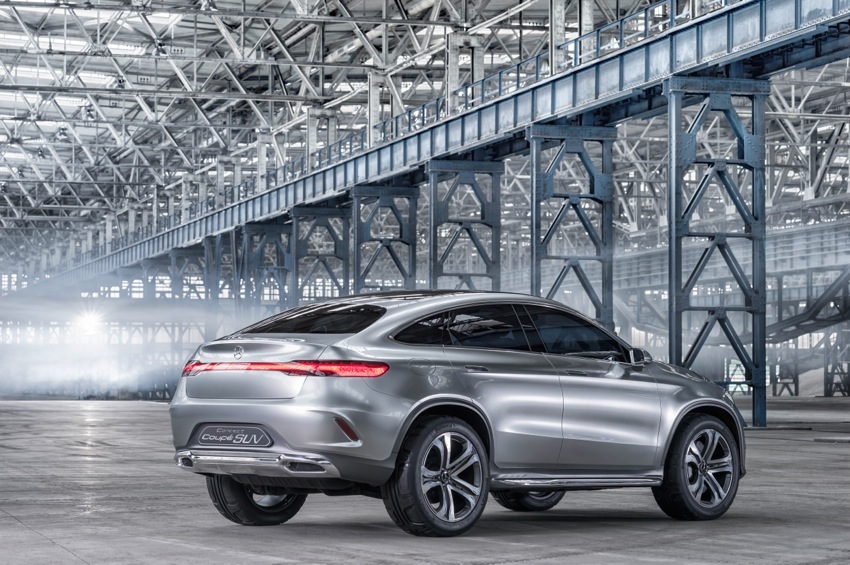 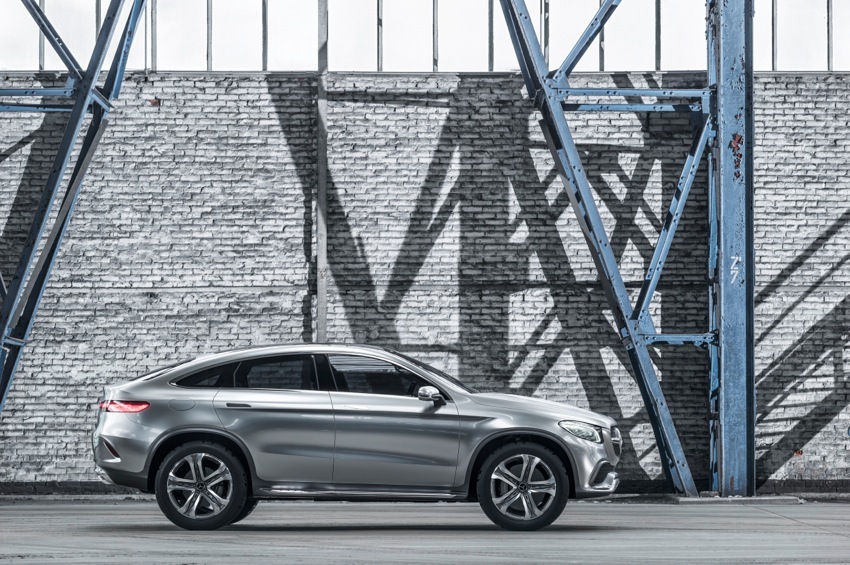