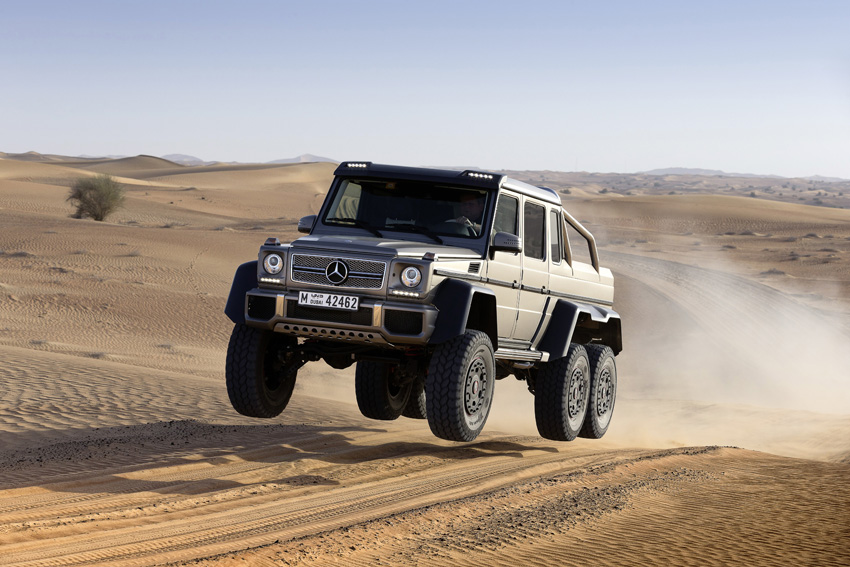 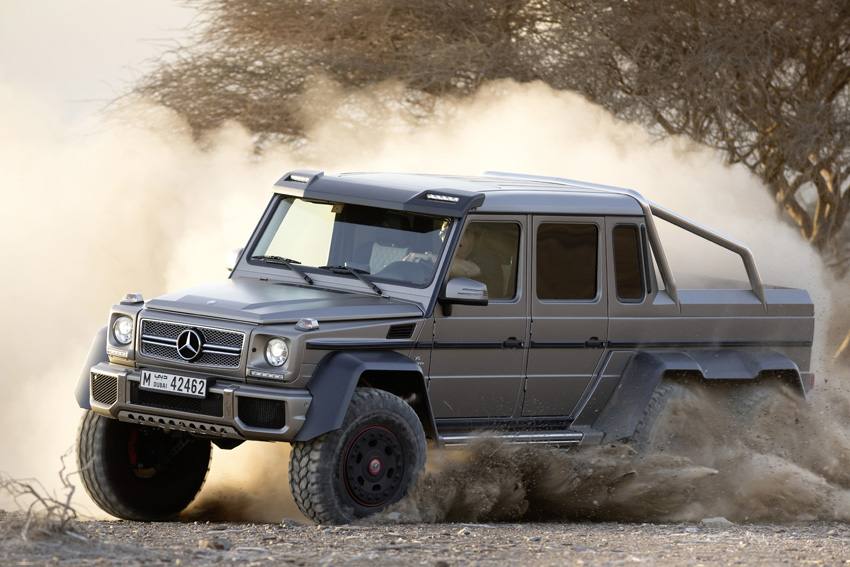 Superior 6×6 all-wheel drive technology, AMG V8 biturbo power and looks that leave no room for any doubt: the Mercedes-Benz G 63 AMG 6×6 near-series show vehicle is an off-roader which represents the last word in forward-thrusting power far from the beaten track. 400 kW (544 hp), a 6×6 drive, low-range ratio, five differential locks, portal axles, tyre pressure control system and a special chassis allow this pickup to make good progress in environments where the concept of individual mobility normally bites the dust as soon as the road ends. But anyone who imagines that this is a Dakar-Rally-style vehicle is on the wrong track. Thanks to the wealth of interior enhancements from the AMG stable, the occupants can enjoy the highest possible degree of comfort, even when negotiating the worst that the combined forces of topography and meteorology can throw at them. The exclusive touches even extend to the load area which is finished in solid bamboo. 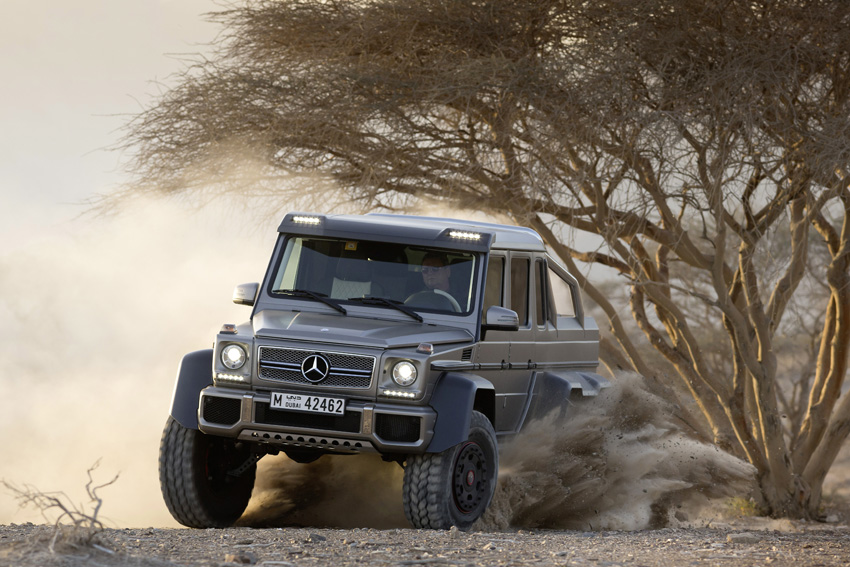 The Mercedes-Benz G 63 AMG 6×6 near-series show vehicle brings together the best of three worlds. The latest, revised G-Class series-production models lend the superior off-roader the effortless superiority and refinement of a vehicle which has dominated the off-road scene for 34 years. They are also the source of the up-to-date interior concept with the contemporary dashboard featuring impressive new instruments and a large, central colour display. Unreserved robustness as well as practicality and a can-do attitude to off-road driving are the traits inherited from the military and the commercial G-Class models. Finally, the renowned Mercedes-AMG luxury and performance division contributes the superior engine technology and the interior which is as luxurious as it is comfortable. 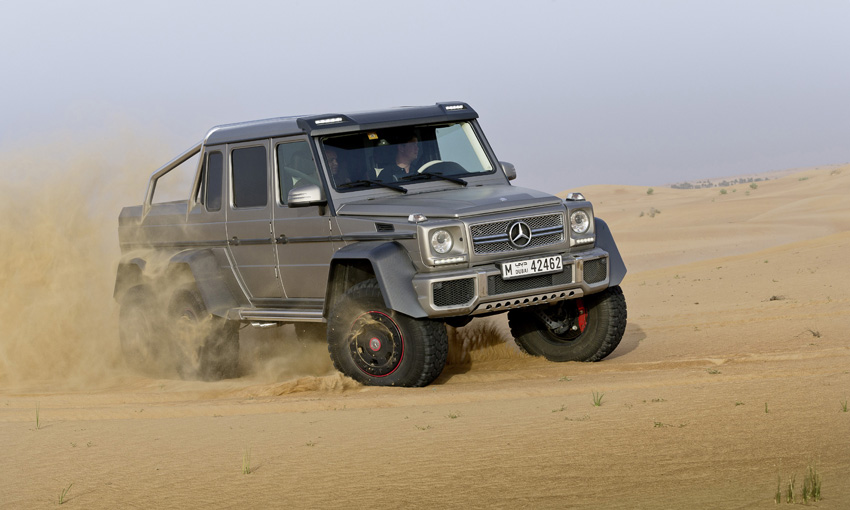 6×6 technology: to the ends of the earth – and beyond 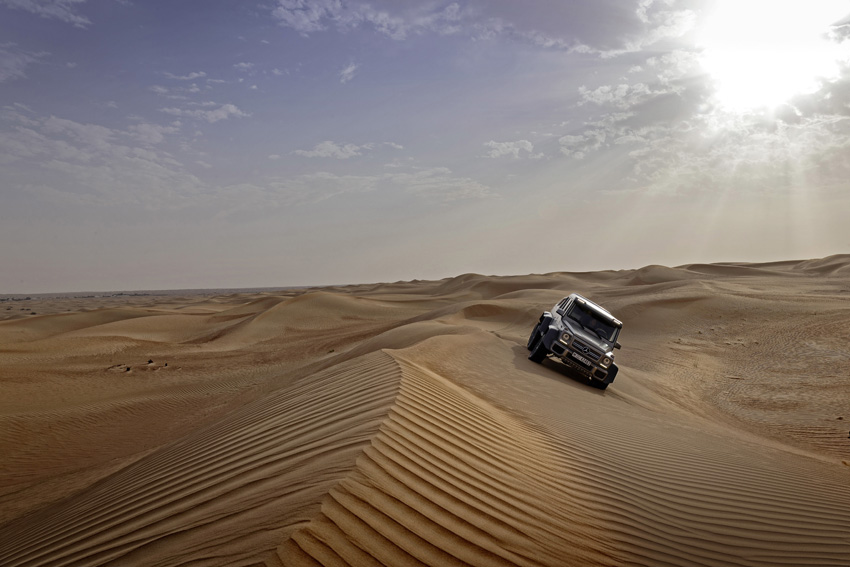 A look at the key data of the G 63 AMG 6×6 makes it clear that this model’s off-road world begins at a point where anything less than a vehicle with caterpillar tracks would have to capitulate. Six driven wheels, an off-road low-range ratio in the transfer case, portal axles, five differential locks which can be engaged on the move and a tyre-pressure control system which allows the pressure in the huge 37-inch tyres to be adjusted in record time while the vehicle is running – all these are features which one seeks in vain in conventional cross-country vehicles. Together, they ensure that the G 63 AMG 6×6 has driving dynamics which are more than a match for the toughest terrain. As a result, the show vehicle is able to storm up the highest sand dunes with ease while sand tracks hold no fears thanks to its unshakable directional stability. Rocky terrain is negotiated with all the agility of a mountain goat; fording a river becomes almost child’s play thanks to the impressive fording capability of one metre. And anyone exploring the on-road performance is certain to be impressed by the catapult-like acceleration of this 3.85-tonne pickup. 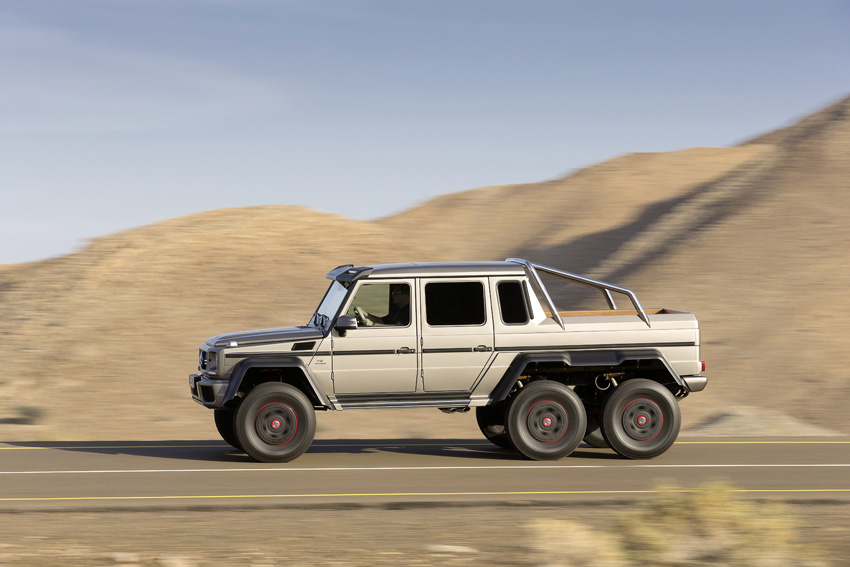 Despite its unique drive technology, the show vehicle does not actually represent a new development in terms of technology. After 34 years of G-Class production, there is such a large array of “G” parts to draw on that the G 63 AMG 6×6 uses almost exclusively series-production components under the skin. A case in point is the drive train: the AMG V8 biturbo engine with 400 kW (544 hp) and 760 newton metres of torque, the AMG SPEEDSHIFT PLUS 7G-TRONIC automatic transmission paired with the front drive system from the G 63 AMG and a rear twin drive train from the 6×6 version which has already proven its reliability in service with users such as the Australian army. Plus the ingenious portal axles, which also have military origins, here making their debut in a civilian vehicle. 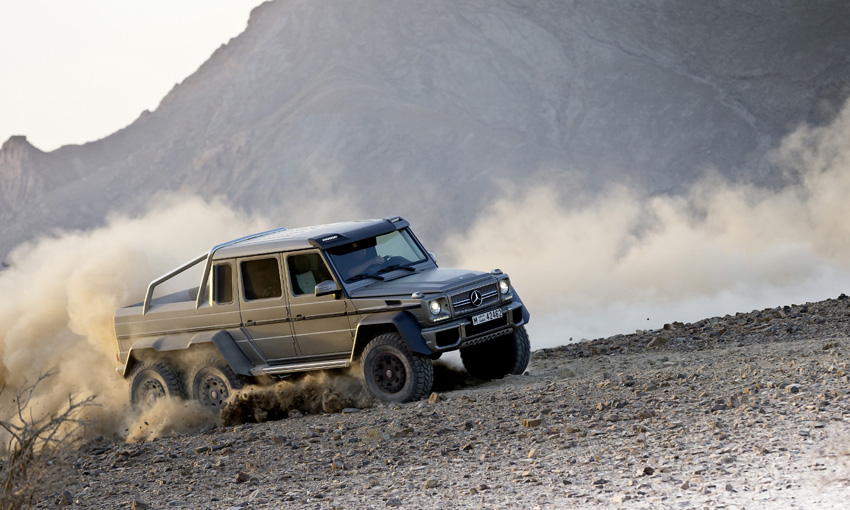 Independent and neutral: the chassis 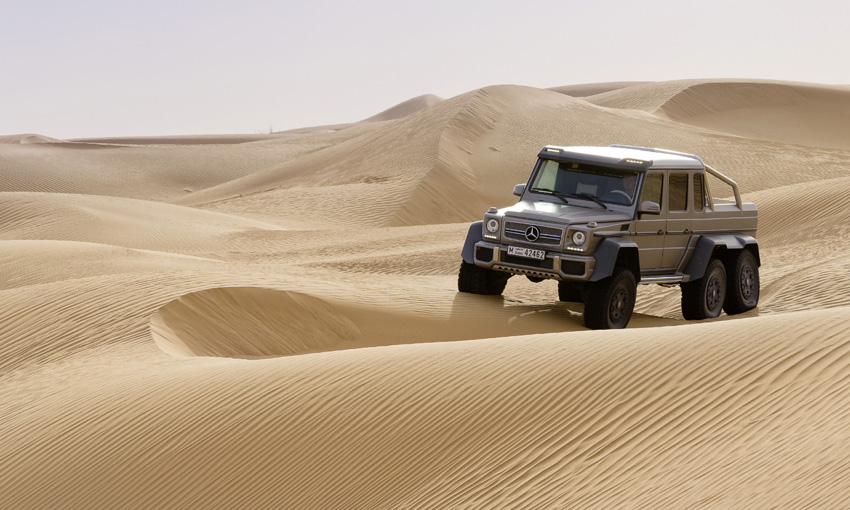 The chassis is largely based on the current production configuration, the only difference being that the helical springs and dampers have been adjusted to take account of the changed characteristics of the three-axle model. For the springs, too, the engineers were able to draw on the comprehensive array of “G” parts, which includes no less than 15 different spring rates. While the front axle takes over the reinforced springs from an armoured special-protection variant, the first rear axle has been given a significantly harder spring rate and the second rear axle a softer one. This set-up, together with the rally-proven, adjustable gas-pressure shock absorbers, results in a perfect symbiosis of sporty dynamism and composed comfort, on or off the road. 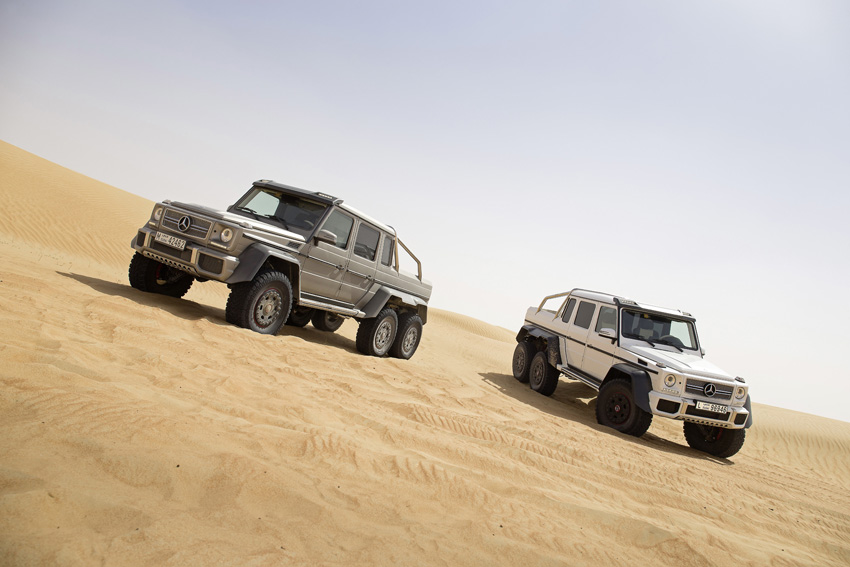 Macho outside – S-Class inside 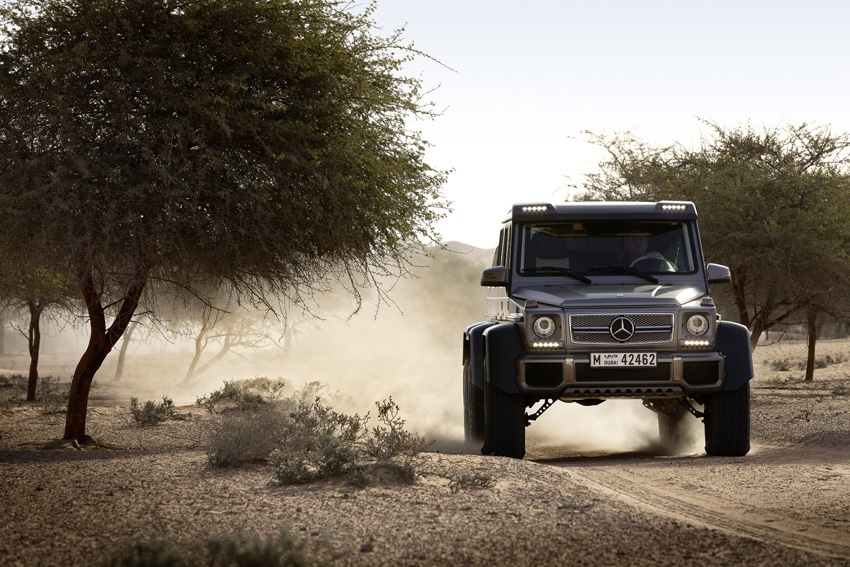 Visually, the G 63 AMG 6×6 pickup leaves no room for any doubt as to its true calling. The large tyres on the three axles, the huge ground clearance, the height of almost 2.30 metres and the width of some 2.10 metres as well as the clean-cut lines of the pickup immediately inspire respect. Like the G 63 AMG and G 65 AMG models before it, the super off-roader with its 5.87-metre-long body has the characteristic AMG brand face with the “twin blade” radiator grille. Other visual highlights include the use of elegant carbon fibre for the integrated LED light strips above the windscreen as well as for the large flared wheel arches while the rear load area section has a distinctive stainless-steel roll-over bar. The load area, which is lined with particularly tough and durable bamboo, can be accessed by means of a tailboard.
Sporty luxury, the hallmark of AMG, is the defining characteristic of the interior. The G 63 AMG 6×6 welcomes its occupants aboard with an exclusive ambience of classic red or light brown designo leather with contrasting topstitching and attractive diamond-pattern quilting. The four electrically adjustable individual seats are heated and ventilated. The rear compartment is equipped with a special centre console while the roof liner and pillars are finished in an Alcantara® covering.The rear panel is trimmed in leather. 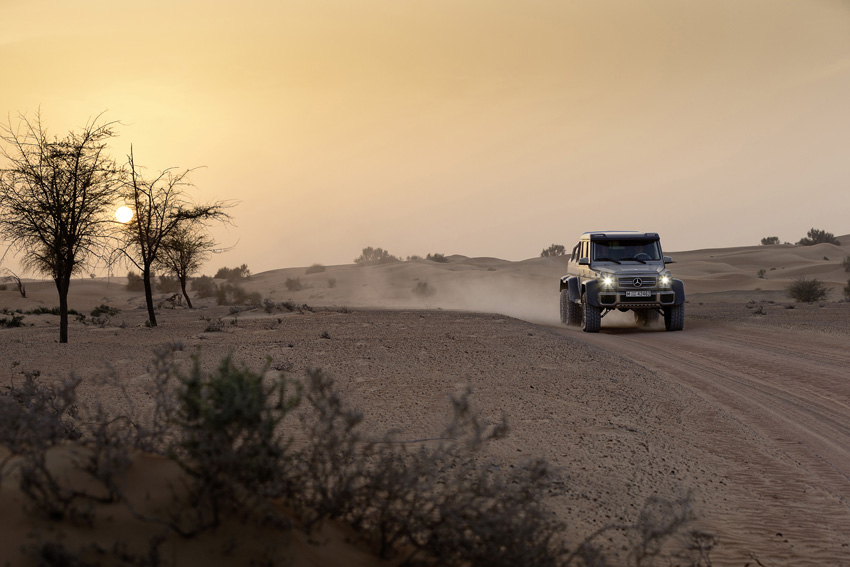 Graz is the centre of the “G” world 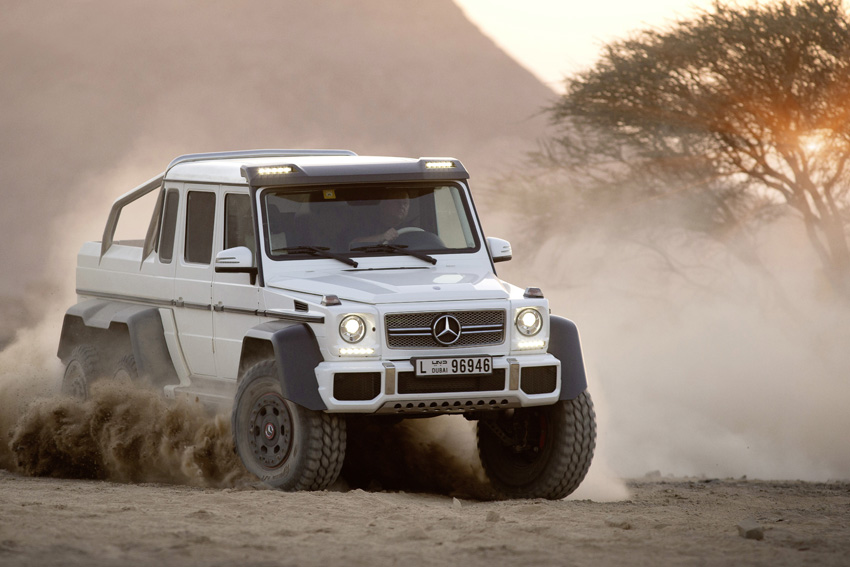 The two G 63 AMG 6×6 vehicles which have been built to date were developed with Mercedes-Benz at the helm. The Graz-based Mercedes-Benz G-Class development department is the centre of competence for all “G” projects and is responsible for development and series support of the legendary cross-country vehicle. Furthermore, Graz in Austria has been the production site for all civilian and commercial G-Class vehicles since 1979. The response to the near-series show vehicle will determine if and when the Mercedes-Benz G 63 AMG 6×6 enters small-series production. 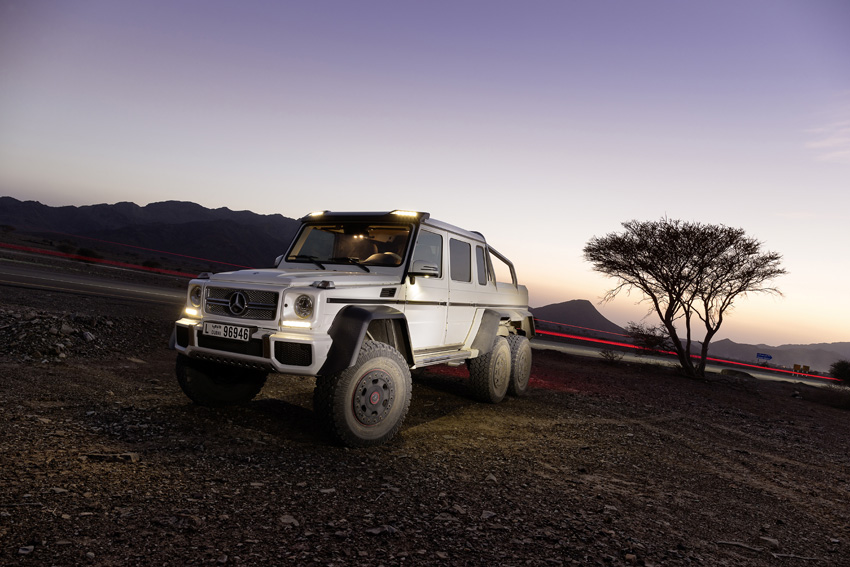 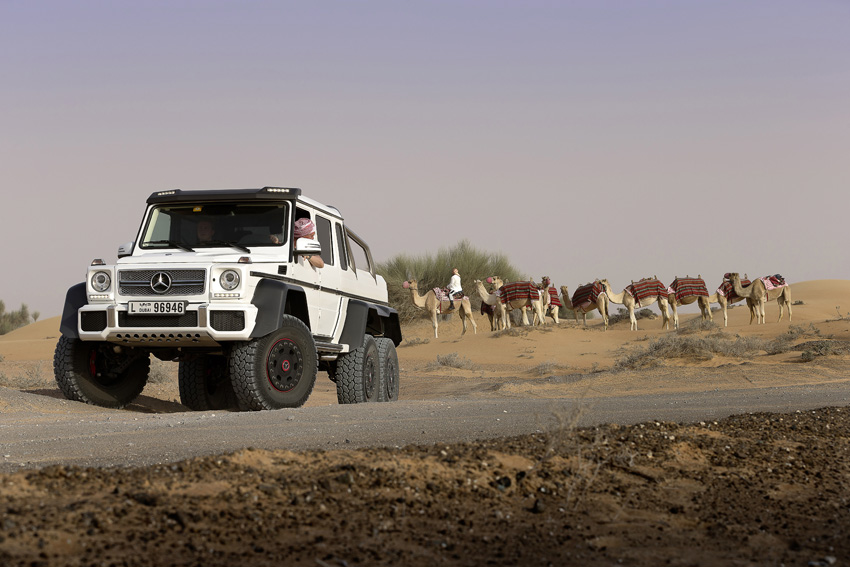 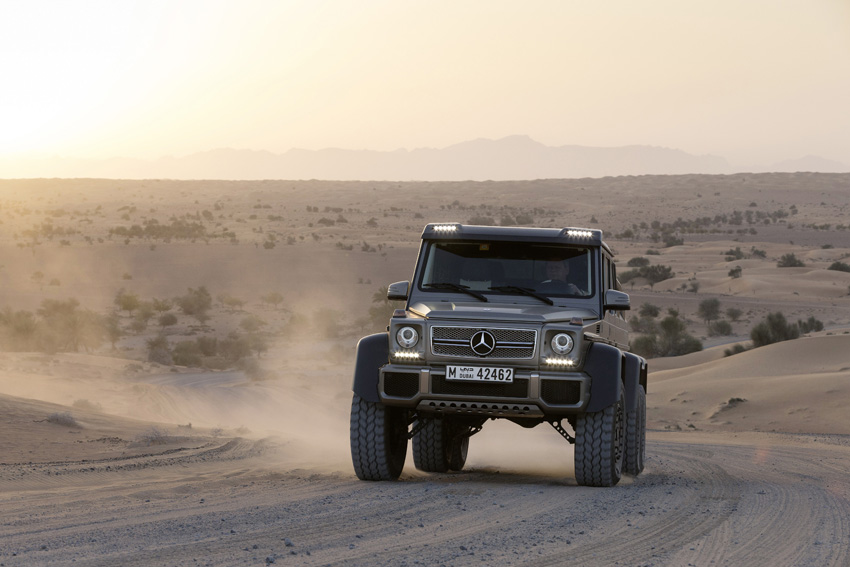 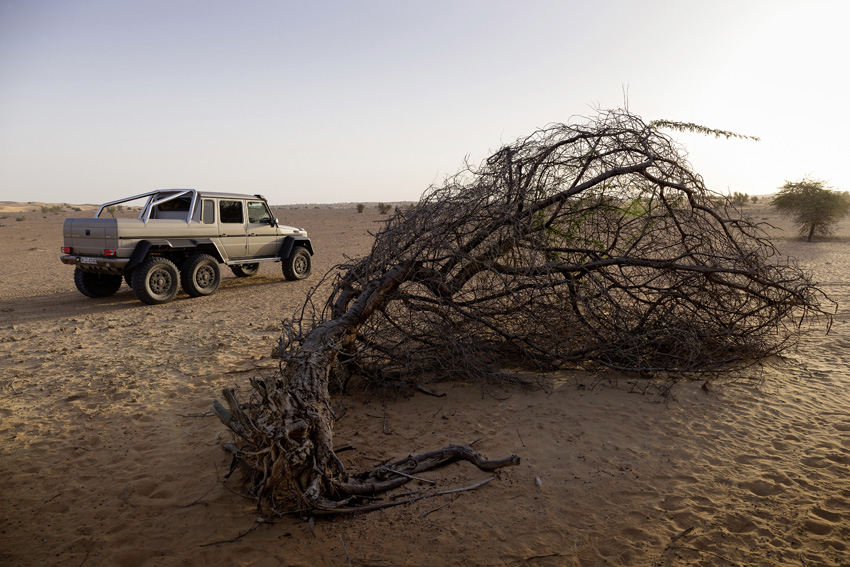